Looking Back and Leading Forward: Celebrating 125 years of NCJW in New Orleans 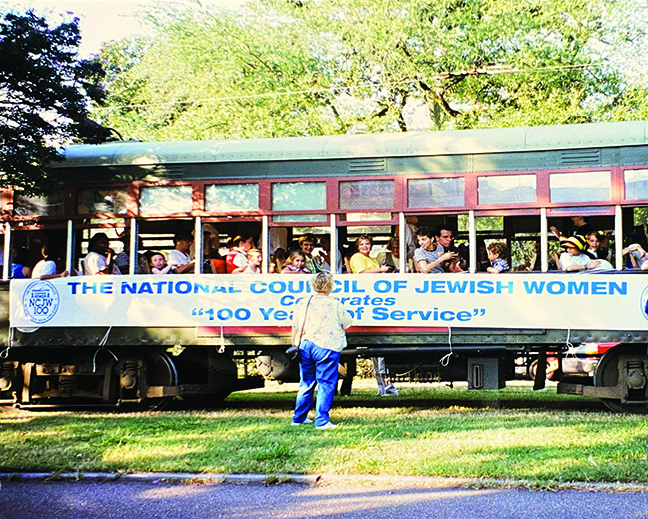 By Barbara Kaplinsky and SJL staff

That’s all in 45,655 days’ work for the New Orleans Section of the National Council of Jewish Women.

The Section is celebrating its 125th anniversary with “Looking Back and Leading Forward with a Salute to Angel Ball” on April 9 at the Higgins Hotel. A patron’s party will begin at 6 p.m., with a signature drink. Dinner and dancing to the music of the Wise Guys will follow at 7 p.m.

The gala pays homage to the Angel Balls, which were held for almost 40 years.

Though the Angel Balls may now be a memory, one thing that hasn’t changed is the Section’s commitment to being a grassroots organization of volunteers and advocates who work to turn progressive ideals into action.

President Gail Pesses said NCJW in New Orleans has lasted 125 years “because of the quality of its mission. Inspired by Jewish values, NCJW-GNO strives for social justice by improving the quality of life for women, children and families and by safeguarding individual rights and freedoms.”

The organization began with Hannah Solomon in Chicago, who then approached women in other communities to form their own Sections. New Orleans was one of the first, with 17 women forming the Section in 1897 and electing Hattie Wolff as the first president.

Aside from innovative programming, the New Orleans Section would make its mark nationally as the only one to provide three national presidents — Ida Friend from 1926 to 1932, Gladys Cahn from 1955 to 1959 and Joan Bronk from 1990 to 1993. 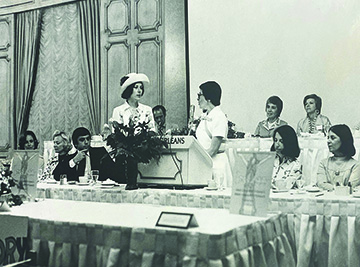 The installation of Joan Bronk as Section president.

After starting off with giving housekeeping lessons to immigrants, in 1903 the New Orleans Section began awarding academic scholarships to Jewish children, a program that continues as the Irma Isaacson Scholarship Fund. Lunches and truancy support for public school children were provided and new immigrants were taught English.

Helping children throughout the community has always been a priority of NCJW-GNO. During the war and early post-war years, NCJW-GNO volunteers were deeply involved with smoothing the way for the flood of refugees into this country. They met them at the docks, at all hours of the day or night, providing them with food, lodging and transportation.

According to past president Sara Stone (z”l), “Council” members met every boat. During these years, the Port and Dock Committee’s job was to greet Jewish passengers as they disembarked. They escorted them to the correct agency people, assisted them with luggage, interpreted for them and saw them into the cars that would drive them on to their next steps.

Stone recalled that one had to be asked to be able to work the dock, “and the sights on the day of the ship’s arrival will remain with me always. I remember a row of women sitting on their suitcases. Like all the passengers, they wore layers and layers of clothes, but you could still see numbers from the concentration camps tattooed on their arms. Many looked older than they probably were.

“Years later, when I volunteered at the Anne Frank exhibit in New Orleans, I discovered by chance the kind of impact our work had had on the people we served. Tours of the exhibit for school children included talks by Holocaust survivors, and I happened to overhear a talk by a woman who had come to New Orleans under the Displaced Persons Act. I walked into the room just as she was telling the children that after being processed on the dock, she was taken to the JCC where she was greeted by some “ladies” from the Council of Jewish Women who offered her food on tables covered with white cloths. ‘White tablecloths!’ the women said. She had not seen a sight like that in years — and had thought she never would again. It had meant her return to dignity. Those of us who worked with NCJW-GNO’s Service to the Foreign Born during those years never forgot the experience either.

“This was our shining hour,” Stone said. 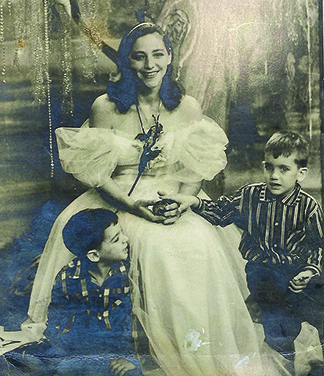 During the 1940s, NCJW-GNO supplied funds and volunteers to the Charity Hospital Pediatric Recreation Program. It promoted child literacy through the “Magic Tree,” with its volunteer storytellers in public libraries. It then became a television show on WDSU in 1951, and evolved into “Let’s Tell a Story” which became the number one children’s show on the station, as well as one of the first shows broadcast in color.

According to Celia Katz, who served as president from 1964 to 1966, they were most proud of the creation of Magicland, an enrichment experiment for disadvantaged preschoolers which served as a predecessor to Head Start. She also boasted of “Enduring Heritage,” a joint effort of NCJW-GNO, Hadassah and Brandeis in the field of Jewish Education.

Julanne Isaacson, president of NCJW-GNO from 1958 to 1960 and executive director of Jewish Family Service for decades, credited NCJW-GNO with providing her the skills that served her well in later in her career.

“New members were convinced to join NCJW-GNO based on acquiring new skills, learning about innovative ways of approaching social problems to find things that work, and its record of advocating for social justice,” Isaacson said.

In the 1970s, NCJW-GNO provided a drop-in center for seniors, and information and referral services in five disadvantaged neighborhoods. Volunteers and funding were provided not only for counseling and job placement for people upon release from prison, but also temporary care for children threatened with abuse or neglect.

Also launched in the 1970s was NCJW-GNO’s Moonlighters Program for working professionals who were unable to participate in daytime activities or volunteer during the day. The first president was Barbara Greenberg, from 1973 to 75.

“When I went to my first meeting at the home of Jane Buchsbaum, I was impressed with the level of intelligence and commitment of the women and the professionalism of the organization,” Greenberg said.

New Orleans had the first such group in the country, so Greenberg was invited to travel the region and encourage them to start similar groups.

According to Kathy Shepard, the most memorable experience of her Moonlighters presidency from 1990 to 1992 was a visit to a battered women’s shelter where Moonlighters worked to provide enrichment to the residents as well as a respite from their own childcare duties. On this night, the women were treated to makeovers.

“The results went far beyond the ‘skin-deep’ outcome we expected,” Shepard said. “The increase in self-esteem by the women was visible as they spoke of their hopes and plans for the future.”

One of the main contributions during Eddy Rosen’s presidency was the implementation of a priority study focusing Section activities on children and youth. According to Rosen, the community benefitted from numerous services that were established during this period. This included Parkway Partners Lifeline, seminars for grandparents, relocation of elderly residents of Delta Towers, participation in adolescent Girls Study and getting the “Zoomobile” on the road.

Many NCJW-GNO programs have endured over the years, as they remain relevant and meet new community needs that fall within the Section’s mission and reflect its Jewish values. 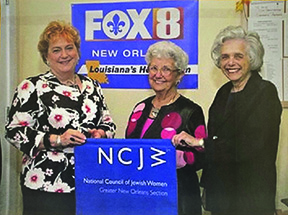 One of the most visible is FOX 8 Defenders. Established by Babs Isaacson in 1995, it started at WDSU-TV (Channel 6) as “6 On Your Side Problem Solvers.” In 2010, it migrated to Fox 8. Volunteers take calls from individuals with consumer problems that seem impossible to fix. The team then works on getting the situations resolved, weeding out fraud or just smoothing things that fall through bureaucratic cracks.

The Section also partners with the New Orleans Family Justice Center, a coalition which works to end family violence, child abuse, dating violence, sexual assault and stalking through prevention and a coordinated response.

Support is also given to groups such as Girls on the Run, NOLA4WOMEN and Court Watch Nola.

In her second year as president, Shelley Farber guided NCJW-GNO through its most challenging time ever — a post Katrina apocalypse.

“On August 29, 2005, our world as we knew it in New Orleans dramatically changed,” Farber said. “As I watched the city I love flood, I also worried about all the members of the Greater New Orleans Section and where and how they were doing.”

Once certain areas of the city opened up, the NCJW-GNO financial secretary was able to retrieve the computers from the NCJW-GNO office. Email blasts were sent, as well as snail mail to find members scattered throughout the country.

“The first of our services to open up was ‘Six on your Side’ (the precursor to Fox 8 Defenders) and was it ever needed,” Farber said. “With the help of modern technology, we held our first executive committee meeting in December 2005. A lot of the members had damage from Katrina but all truly stepped up to the plate for the benefit of the Section.”

The hallmark of Susan Kierr’s presidency from 2015 to 2017 was intergenerational participation by bringing in young, vibrant future leaders. It relied on a leadership training program designed by Madalyn Schenk, called NCJW Way. An intensive yearlong seminar for women new to NCJW-GNO, it led to inspiring future board leaders who became staunch members of the public affairs efforts of NCJW-GNO.

During the presidency of Barbara Kaplinsky from 2017 to 2019, the NCJW-GNO Public Affairs effort was fortified. This emphasis on social justice resulted in the formation of “Engaging New Voices and Voters,” a voter registration, education and turnout coalition, that to date has registered more than 10,000 new voters. During this period, NCJW-GNO actively supported the passage of a law that gave formerly incarcerated persons the right to register to vote, and the local Section was recognized with the national “Champions for Social Change” award.

In April 2020, while Covid was spreading throughout New Orleans and the world, NCJW-GNO was forced to pivot to “Zoomland.” This new technology enabled NCJW-GNO to reach far beyond what it had traditionally been able to achieve. According to Susan Hess, who served as president from 2019 through 2021, NCJW-GNO initiated a series of monthly webinars around subjects such as antisemitism and feminism.

“These Zoom presentations reached many hundreds of viewers around the world on topics such as traditional forms of antisemitism, blood libels, conspiracy theories, white supremacy, and Zionism as the new form of antisemitism,” Hess said. “Also using Zoom, we presented a Women’s Issues webinar series touching on the history of feminism, women’s health issues, and women and employment.”

Pesses says that while she is delighted with all that has been accomplished over the past 125 years, NCJW-GNO is “not resting on its laurels.”

“I look forward to what my term holds and to all that we will accomplish for the benefit of our community over the next 125 years,” she said.