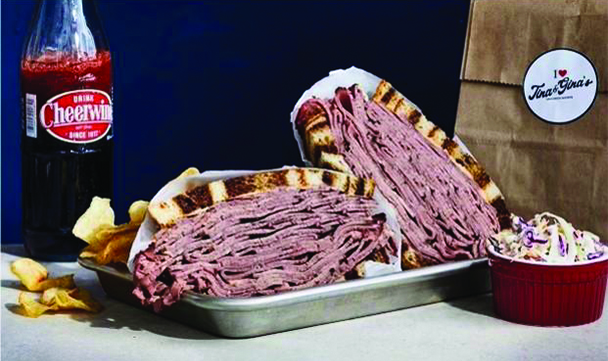 Christina Harrison wanted to bring a bite of the Big Apple — and deli-style sandwiches — to the South.

That subway car arrives in the station with her dream realized as I Love Tina and Gina’s opens on April 16 at The Pizitz Food Hall in Birmingham.

“Growing up in New York, you have a New York style deli on almost every corner,” said Harrison, who has lived in Atlanta for many years now. “My mom and I would go to the delis all the time and I missed not having them here. We want a place with charm and a family-oriented environment that could serve all the things we loved to get when I was young.”

Harrison was working as a management consultant and helping Erika Barrett with the opening of her SoKu soul food restaurant, also opening at The Pizitz toward the end of April.

“We became friends and she knew I liked to cook,” she said. “We felt that there is a real need for this and when a space opened up, I knew it was meant to be.”

Harrison named the restaurant for her grandmother (Tina) and mother (Gina). The décor features wallpaper that includes some important places to her and her family in her native Long Island as well as across New York. The floor is New York taxicab tile. Menus are designed to resemble subway maps.

I Love Tina’s and Gina’s serves an array of sandwiches synonymous with New York delis with Harrison’s special touch, including Reubens, The Tommy Pastrami, the “Italian Stallion” and a Bronx-style Boogie Down Chopped Cheese, a New York take on a Philadelphia cheesesteak.

“We’re also going to give customers the option to make their own sandwich from a selection of meats, cheeses, breads and vegetables,” said Harrison. “So we can customize any sandwich to make it kosher-style.”

All the meats are from Boar’s Head, and I Love Tina and Gina’s will also offer charcuterie plates, chicken salad, potato salad, truffle fries, soups of the day and a few breakfast items. They also offer catering services, including some platters that feed up to 30 people.

“I’ve also got a few instances, including the Arnold Palmer sweet tea, where I’m bring touches of the South into the menu,” said Harrison.

I Love Tina and Gina’s will be open from 11 a.m. to 8 p.m. For the April 16 grand opening, from 3 to 8 p.m., Harrison plans some giveaways, family activities, games and New York trivia.

She moved into a condominium upstairs at The Pizitz and it is her hope that the success of the flagship I Love Tina and Gina’s will open the door for other locations across the South.

“We really want this place to have something for everyone,” said Harrison. “This is really all about traditions centered around love, family and great food.”