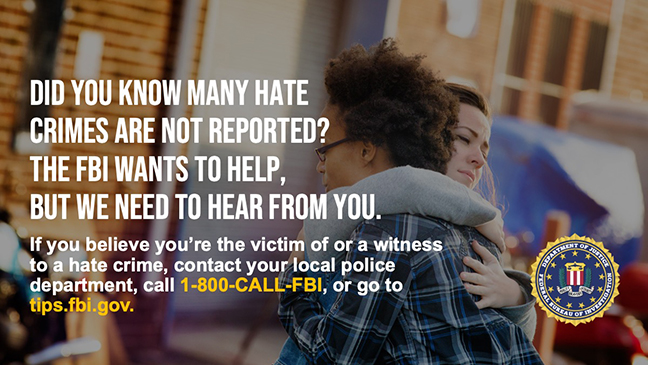 As a result of growing antisemitism and other forms of hatred, the FBI has launched an aggressive campaign urging both victims and witnesses to such events to report such incidents.

One of the venues selected by the FBI to advertise its message is Southern Jewish Life magazine.

“A federal hate crime is defined as a criminal offense against a person or property motivated in whole or in part by an offender’s bias against a race, religion, disability, national origin, sexual orientation, ethnicity, gender, or gender identity,” the FBI explained as it initiated this project.

Sharp grew up in Knoxville, Tenn., where, as the son of a Caucasian father and a Japanese mother, he experienced anti-Asian prejudice.

“I am bi-racial. My father was a career army officer and met my mom in Japan. I grew up in south Knoxville, which was not the most diverse area,“

Sharp explained in a recent interview as he reflected on an upbringing that has made him especially sensitive to racial, ethnic and religious hatred. “In middle school, I was subjected to slurs directed at me, so I speak through that lens.”

As he was climbing the FBI career ladder, Sharp did a stint in Jackson, Miss., where he encountered the racism and bigotry that has plagued the South historically.

“I’ve grown up in the South and it is has a very horrid past, especially when it comes to the African-American community and to some extent the Jewish community.”

Reflecting on his tenure in Birmingham, which began in 2017, Sharp said, “We want to serve all communities and specifically those communities that have been targets based on ethnicity and religion. The Jewish community fits in that category.”

The FBI has a good relationship with the Jewish community in his region, Sharp noted.

“The community knows it can reach out to me directly,” said Sharp. “Just yesterday we got an email about an antisemitic flyer in Florence, Ala.,” he said on the day he was interviewed, noting that the FBI would follow up.

The FBI offices in Birmingham and New Orleans have been working extensively with the local Jewish communities on recent security initiatives.

A main reason the FBI has undertaken the public awareness program is that hate crimes go largely unreported. This makes it hard for the FBI to pinpoint the exact number of such crimes.

The FBI has reached out to other minority communities. These include the African-American, LGBTQ, Hispanic, Asian and Muslim communities, said Sharp, because historically all have been targets of hate crimes.

Relatively speaking, he has not seen a broad uptick in hate crimes against Jews, though some have occurred. During his tenure in Alabama, he’s encountered just three incidents.

“I have not seen a lot. I think that’s a good thing as it relates to the Jewish community in north Alabama.”

Sharp believes the new FBI ad campaign is having an impact on awareness but, he admitted, it’s too early to tell for sure. He’s waiting for more data.

When it comes to the awareness initiative, the FBI, Sharp said, also faces two challenges — making the public aware and working with local officials.

In certain situations “mayors or police chiefs may not want statistics accurately reported because it reflects poorly on them… We know hate crimes go unreported where there are mayors and police chiefs who don’t want those statistics publicized.”

Explains the FBI: “Hate crimes are a high priority for the FBI because of the intended, devastating impact such crimes have on entire communities.”