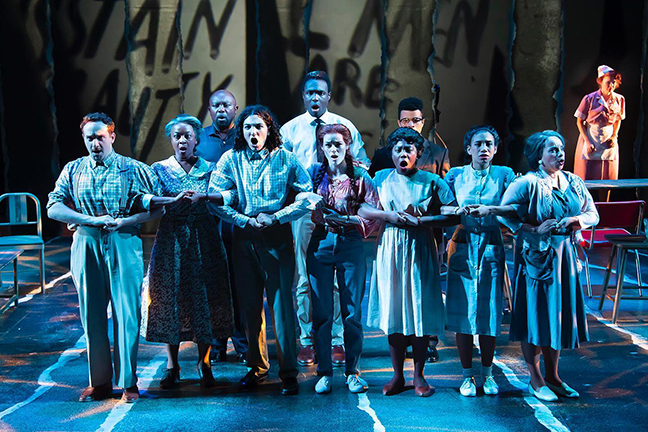 Ricardo Khan believes theatre can inspire change and unity through sharing history about people coming together to change the nation.

The writer-director’s play “Freedom Rider,” which centers around four students — including a young Jewish man from Ohio — celebrates the watershed journey of Freedom Riders coming from Washington to the Deep South during the heat of the Civil Rights movement, in May of 1961, to challenge segregated spaces in interstate travel.

“Freedom Rider” debuts April 8 and runs through April 24 at the Alabama Shakespeare Festival in Montgomery.

“We have challenging times today. With ‘Freedom Rider,’ we want to share moments of people from all backgrounds coming together to support something they believed strongly in… to take action. I look at it as not just a history lesson but as an inspiration for today,” said Khan, who produced “Fly,” the play he wrote at the ASF in 2018 about the Tuskegee Airmen.

For “Freedom Rider,” Khan collaborated with four other writers — Kathleen McGhee-Anderson, Murray Horwitz, Nathan Louis Jackson and Nikkole Salter. Each wrote one of the four characters.

Horwitz, who gained some acclaim as the first Jewish clown with Barnum and Bailey’s Circus, wrote the Jewish character.

“There is a long history of people in the Jewish communities playing important roles and aiding in the Civil Rights movement,” said Khan. “That character in ‘Freedom Rider’ is not doing what he is doing because he is Jewish, but his background certainly prepared him for this.”

Khan is from Philadelphia. His mother is African-American and his father is from Trinidad. Growing up, Khan went to a Quaker school.

“I was the only African-American and my friend was the only Jew in the school,” he said. “We both experienced some prejudice and we bonded over some shared experiences. I believe in the power of tzedakah and Tikkun Olam. We must come together and help those in need. Only then can we heal the world.”

Khan said the characters represent an amalgam of some of the Freedom Riders and the play is inspired by actual events. He said that he, his collaborative team, crew and cast spent additional time before rehearsing to go through much research as well as visit the Freedom Rider Museum in Montgomery.

“I believe in the magic of the theatre and we hope that people will be moved by this show,” he said. “We want people to recognize themselves in that history, but we want that recognition to be visceral and personal. We wanted to create something that is engaging and ultimately uplifting.”