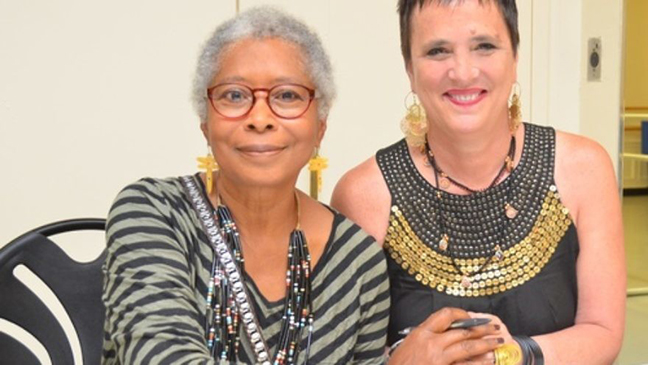 Author Alice Walker and playwright Eve Ensler clasp hands at the 92nd Street Y in New York City on the night they appeared together in dialogue in 2013. JNS photo by Maxine Dovere.

Just two weeks after novelist Alice Walker was dropped from the Bay Area Book Festival for her “endorsement of antisemitic conspiracy theorist David Icke,” the Mississippi Book Festival announced her as the first speaker for this year’s event in Jackson.

Walker is the first African American woman to win the Pulitzer Prize for fiction, and this year is the 40th anniversary of the release of that book, “The Color Purple.”

“We are thrilled to have Alice Walker back in the city where she once lived and the place where her daughter was born,” Mississippi Book Festival Executive Director Ellen Daniels said in an April 7 release. “Her appearance will be a homecoming of sorts for her and we are honored that book lovers and festival-goers will have the opportunity to share in that moment.”

In San Francisco, Walker was scheduled to interview Honorée Fanonne Jeffers at the headline event for the May 7 festival. On March 24, the festival cancelled the invitation after learning of Walker’s history of remarks that are considered antisemitic.

Jeffers, a noted poet who graduated from Talladega and the University of Alabama, had requested Walker and also pulled out of the festival when Walker was disinvited.

Julia Drake, publicist for the Bay Area festival, told j. the Jewish News of Northern California that “We were aware of the fact that Alice Walker had made some controversial statements in the past, but we weren’t aware of the extent of it. One of the big missions of the festival is we won’t tolerate any hate speech or antisemitic statements, so we realized that this was not something that we could do.”

Ellen Daniels, executive director of the Mississippi festival, reiterated to this publication that Walker’s appearance is to celebrate the 40th anniversary of “The Color Purple” and the release of her new work, “Gathering Blossoms Under Fire: The Journals of Alice Walker: 1965-2000,” which includes her time living in Mississippi. “The Mississippi Book Festival celebrates authors and their contributions to the literary landscape,” she said.

Daniels said Penguin Random House has released a new edition of “The Color Purple” with a foreword by Kiese Laymon, who will lead the conversation with Walker during the festival.

In her response to SJL, Daniels did not directly address the controversy over Walker, but she had told WLBT-TV in Jackson that they were aware of Walker’s past comments, but invited her to celebrate “The Color Purple” and the new book.

The California festival organizers said their main reason for disinviting Walker was her endorsement of Icke, promoting his work “And The Truth Shall Set You Free” in a 2018 New York Times interview. When the interview came out, the Times was widely criticized for not mentioning the antisemitic or conspiratorial nature of the book. Icke promotes the idea that Jews control the world, and often references the notorious antisemitic forgery “The Protocols of the Learned Elders of Zion.”

Icke claims to be the “Son of the Godhead” who has special spiritual revelations, and one of them is that a secret cabal of alien lizard people run the world, and most of them are Jewish. He also states that the Holocaust probably did not happen, but if it did, the Rothschilds funded it. The Rothschilds are a popular target for those who claim that Jews are secretly running the world.

More recently, Icke has claimed the Rothschilds funded the creation of the coronavirus, and Israel was using the pandemic to “test its technology.” Walker also posted that on her blog.

Walker has defended Icke, saying he is neither antisemitic nor anti-Jewish.

But Walker has her own history of hostility to Jews and Israel. In 2012 she refused to allow the publication of a Hebrew translation of “The Color Purple,” because of Israel’s supposed mistreatment of the Palestinians.

She participated in a 2011 flotilla to try and break an Israeli blockade against weapons shipments to Gaza, and is a core member of a group of activists that tries to get performers to cancel concerts or shows in Israel.

Her 2013 book, “The Cushion in the Road,” was “replete with fervently anti-Jewish ideas and peppered with explicit comparisons between Israel and Nazi Germany,” according to the Anti-Defamation League. One-fourth of the book, a section called “On Palestine,” is “rife with comparisons of Israelis to Nazis, denigrations of Judaism and Jews, and statements suggesting that Israel should cease to exist as a Jewish state,” the ADL continued. She also justifies terrorism against Israeli civilians.

Abraham Foxman, ADL national director at the time, said Walker “is unabashedly infected with anti-Semitism,” and “has taken her extreme and hostile views to a shocking new level, revealing the depth of her hatred of Jews and Israel to a degree that we have not witnessed before.”

In 2017, she published a poem, “It Is Our (Frightful) Duty to Study the Talmud,” where she used fabricated or out of context quotes popular among antisemites to “prove” that Jews condone things like sexual abuse of minors and murdering Christians.

She said that in her “YouTube study” of the Talmud, she found “an ancient history of oppression” of “Goyim, sub-humans, animals, the Palestinians of Gaza” executed “With impunity, and without conscience,/By a Chosen people.”

Walker wonders where Jews look “For the inspiration/For so much evil?” and finds it in “the poison” of the Talmud.

In Mississippi, Walker is seen as a groundbreaking figure. In 1967 she married Mel Leventhal, a Jewish civil rights attorney, and they moved to Mississippi shortly after. It was the first legal interracial marriage in the state, and it was still illegal in her home state of Georgia. Leventhal’s family refused to accept the marriage, and he reportedly refused to confront his relatives on their bigotry toward her. The marriage ended in 1976, and she soon moved to California.

In “The Cushion in the Road,” she wrote of meeting an elderly Palestinian woman in the territories, who blessed her with “May God protect you from the Jews,” to which she replied, “too late, I already married one.”

She was a writer in residence at Jackson State and Tougaloo, and published her first novel during that time. In 1976, her second novel, “Meridian,” described activists working in the South during the civil rights movement. “The Color Purple” was published in 1982.

This is the eighth year of Mississippi’s “literary lawn party,” held on the State Capitol grounds on Aug. 20.