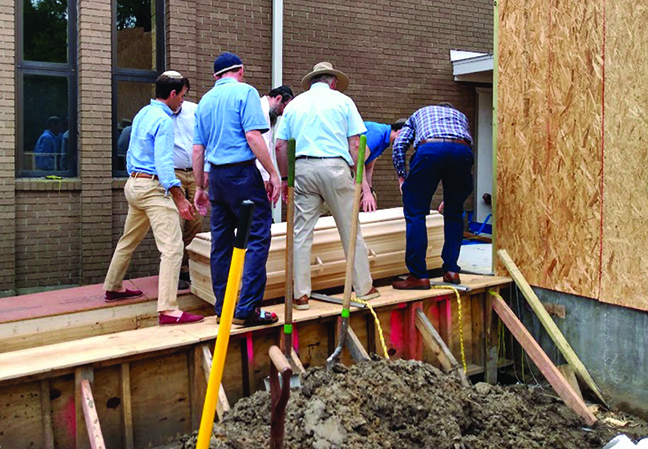 The rabbis carry the casket with the Torah. Photo courtesy Carolyn Lenz.

Louisiana has always had a complicated relationship with water, and the dichotomy of water as destructive and rejuvenating will be reflected in a unique way in the new Oscar J. Tolmas Louisiana Community Mikvah.

The facility, which involves every Jewish congregation in the New Orleans and Baton Rouge areas, is currently under construction behind Shir Chadash in Metairie. On April 5, there was a ceremony to bury three Torah scrolls belonging to Shir Chadash that had recently been damaged beyond repair. Those scrolls, and a collection of worn holy books from Shir Chadash and other area congregations, were buried beneath what will be the ramp leading into the mikvah building.

“It’s absolutely unique,” said Rabbi Deborah Silver of Shir Chadash. “The path to the mikvah is strewn with holy words.”

On Aug. 29 — 16 years to the day after Hurricane Katrina hit the area as a category 3 storm — category 4 Hurricane Ida struck New Orleans. It made landfall on Sunday, so that Friday the congregation took most of the Torahs to a location that had been used during Katrina and that had remained safe and dry during the flood.

After Shabbat, they took the last couple of Torahs that they had used that day, double-wrapped them in plastic and put them at a high location in the synagogue.

In 2005, the levee breach left a couple feet of water in Shir Chadash. This time, Shir Chadash was safe, but “unfortunately, this time the other place took water,” and four of the congregation’s Torahs were damaged. 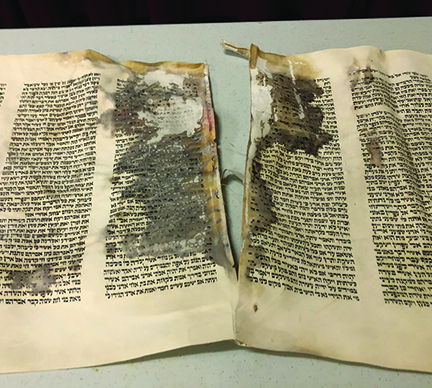 Silver contacted a classmate and friend who is a scribe, Rabbi Rachel Salston, who examined the scrolls. One had minor damage that was easily repaired, but the other three “she found as we suspected that they were damaged beyond repair.”

Some sections were water-damaged beyond repair, while in some places the sections had come apart with damage that almost looked like the parchment had burned, she said.

Silver felt that since it was clear that the scrolls would need to be buried, she consulted with Rabbi Gershon Grossbaum, a Chabad mikvah expert who is overseeing the New Orleans project, as she figured it would be meaningful to bury the scrolls in the foundation of the mikvah.

“He advised the Torahs should be encased in a way that shows due respect, and an honorable interment would be appropriate,” Silver said.

Silver spoke to Xiomara Morter at Tharp Sontheimer, which constructed and donated a casket “to honor the Torahs.”

The scrolls were wrapped in plain white sheets and placed in the casket with their damaged mantles and bags of earth from Mount Zion, then Silver prayed over them.

She noted that the scroll on the top was rolled to Deuteronomy 21, which describes a ceremony that takes place when a body is found and there is no way to determine if anyone is at fault. The ritual is that the town elders take a calf and break its neck, then wash their hands declaring that they did not shed the blood of the murdered victim and the town should not be held responsible.

Silver said the ritual shows “things happen that are nobody’s fault. But there needs to be honor in that situation.”

As Shir Chadash is the product of a merger, even with the loss of three Torahs, the congregation currently has enough scrolls to use, but there may be a new one acquired in the future. The ceremony was held on short notice, when the construction crew said they were ready to do the ramp.

Numerous rabbis attended, including Rabbi Robert Loewy, emeritus of Gates of Prayer and leader of the mikvah project, Beth Israel Rabbi Josh Pernick and Rabbi David Posternock, Rabbi Yossi Nemes from Chabad of Metairie, and Rabbi Michael Cohen of Jewish Community Day School. They carried the casket to the top of where the mikvah ramp will be, at the threshold of the building, and then books that were being buried were placed further down the ramp.

Jewish Endowment Foundation of Louisiana Executive Director Bobby Garon, who is also head of mikvah board, attended, as did Sandy Lassen of the Chevra Kadisha, and Morter represented Tharp at the ceremony. A crew from the funeral home was needed, since just like a regular funeral, the straps to lower a casket were used. 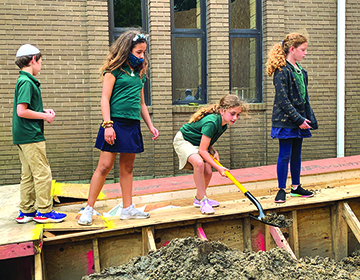 Students from grades 3 to 6 at the Day School attended, and sang “Etz Chayim” as the Torahs were carried up the ramp, and they picked up shovels to participate in the burial.

Silver then led the Kaddish d’ithadita, which is said on only two occasions — after a burial and after study. She said that while in rabbinical school she never would have thought of an occasion where both reasons were appropriate.

The ceremony was “incredibly meaningful,” she said, as it “honored the mikvah, it honored the Torah and honored every word of the books that were buried.”

It also underscored the transformative nature of the mikvah. Being accompanied by the words of the scrolls that were destroyed by water, one enters the waters of the mikvah, where “the whole point is you come out different than you come in.”