Another era: Remembering Rep. Tom Bevill and his ties to the small Jasper Jewish community 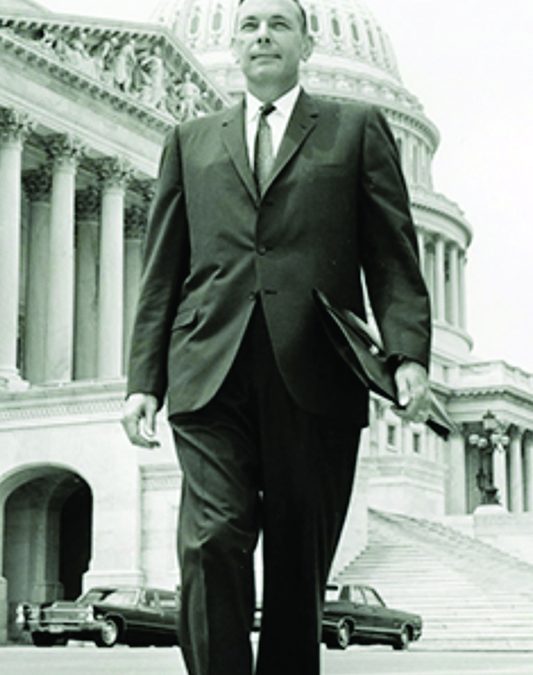 Tom Bevill was from a long ago era, that was not too long ago.

It was a time when there was no social media, when policy was at least as important as politics on Capitol Hill, when character mattered over soundbites, and power was used to help people, not self-aggrandize.

No one perhaps epitomized that recent bygone era more than Bevill, a tall, thoughtful small-town lawyer from Jasper, Alabama, who understood intuitively that the way to help people is by listening to them and fashioning strategies and solutions, often based on compromise, that lead to the betterment of all.

The longtime Alabama Congressman, who would’ve turned 100 last year, is the subject of a new Alabama Public Television documentary.

Bevill, who died in 2005, represented Alabama’s Fourth Congressional district, which includes Jasper and Gadsden, for 30 years.

A Democrat, he became a powerful figure on the all-important U.S. House of Representatives Appropriations Committee, which positioned him to direct massive amounts of federal money into his district as well as elsewhere in the state.

He did it quietly and strategically, and specialized in building and sustaining friendships on both sides of the political aisle.

The documentary, which traces Bevill’s life from his hardscrabble Walker County background to the pinnacle of Congressional power, notes that Bevill was often referred to as “Alabama’s third senator.”

Olivia Barton Ferriter, a longtime Bevill staff member who is featured in the documentary, to this day continues to call him Mr. Bevill, even 17 years after his death.  “I would never think of calling him anything else.”

Yet behind this story is another story; the saga of a skilled and humble Christian mensch who enjoyed especially good relationships with the small Jewish community in Jasper where he lived.

“He was absolutely a wonderful person,“ Birmingham’s Alan Engel, a Jewish community leader who grew up in Jasper, recalled in an email. “There aren’t many like him left.”

Engel’s first cousin, Ronne Mitnick Hess, who also grew up in Jasper, remembered the 15-term congressman as  “a good, solid person — honest and hardworking.  He was a friend.”

She recalled that Bevill and his wife, Lou, a dynamic and influential person in her own right, bought her parents’ home.  Ronne’s grandmother, Fannie Engel, who lived to be 100, resided in the house next door.

“The Bevills lived next to our grandmother until she died.  Lou was very good to her and checked on her when they were in town.”

It is said that “all politics is local.” This may also be true of enduring relationships, such as the one Jasper’s Jewish community enjoyed with Bevill as he ascended to power.

While attending a conference for young Jewish leaders in Washington years ago, the two cousins visited Bevill in his Capitol Hill office. One of the issues of the day was prayer in school.

Many Jews, especially those who lived in communities where they were a small religious minority amid a large Christian majority, were uncomfortable with prayer in school, believing that it would violate America’s church/state doctrine, and discomfort and isolate Jewish children.

“Congressman Bevill said something to the effect that he wasn’t sure what all the fuss was about,” Engel remembered as they brought up the issue.

“Ronne then told him in very emotional terms what it was like for her to have to participate in the prayers at the Jasper schools as a Jewish student. He listened intently, thanked Ronne for her candor and said he now understood,” Engel continued.

“Then, on the way out, he told us that, while he would not be taking a public stance, he would delve more deeply into the issue to learn more about it.  We don’t know what the congressman did after that meeting on this issue, but we appreciated that he listened. We do know that particular legislation did not pass.”

The congressman’s willingness to listen and learn more is not surprising if one studies Tom Bevill’s character — it was marked by a respect for all people and a genuine openness to considering the views of others, attributes highlighted throughout the new documentary.

“The Tom Bevill you would have met is the exact same person that we grew up with at the dinner table. He was the same person for all groups of people.”

Added Warren, who now lives in Birmingham, “My father had a real strong sense of fairness for all people.”

She also talked about her mom, a well-respected Congressional spouse. Among Mrs. Bevill’s achievements was her work on behalf of Soviet Jewry, a major international human rights issue during much of her husband’s congressional career. 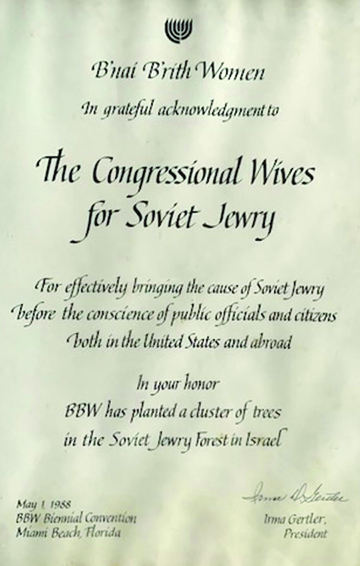 Immediately upon being contacted for this story, Warren proudly sent a screenshot of a certificate Mrs. Bevill received from B’nai B’rith Women honoring her for her role in Congressional Wives for Soviet Jewry.

Mrs. Bevill was commended “For effectively bringing the cause of Soviet Jewry before the conscience of public officials and citizens both in the United States and abroad.”

Warren also shared a personal story that reflected how close the Bevills were to the Jasper Jewish community.

“My best friend in elementary school was Jewish so I often attended services at Jasper’s temple while growing up,” she said.

“I came home and told mom I wanted to join the temple.  It was the warmth of the people, their obvious love for each other, the atmosphere and the rituals of singing, prayer and reading. I loved the sounds,” continued Warren.

“Mom listened and nodded in an understanding way.  Then she suggested I take a little more time to think about it before I decided.  Good advice to an 11-year-old!”

Bevill and his wife visited Israel on a congressional trip and she went back with a Christian group.

“I remember him saying that Israel can’t afford to lose a war,” said Smith. “He was very empathetic. I think he felt an obligation to the people of Israel and the struggle Jews have faced for thousands of years. He had a good record when it came to voting for measures related to Israel.”

As the new documentary prompts more people to reflect on the Alabama congressman’s impact on Congress and his contributions to his district, state and nation, they will likely find themselves agreeing with this summation from Gerson May, a member of another longtime Jasper Jewish family.

“I found Congressman Bevill to be a friendly, knowledgeable and kind man,” said May, who served with Bevill in the Army Reserve. “He was a pleasure to work with.”