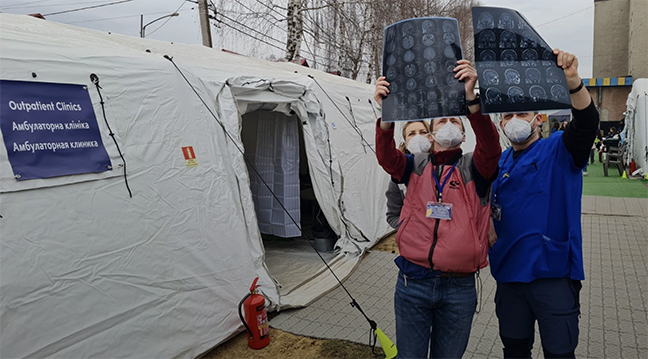 Doctors at the Israeli field hospital in western Ukraine evaluate MRI images in the morning light. Photo by Naama Frank Azriel, via Israel21c

With the recent approach of Passover, a holiday that commemorates the biblical exodus of the Jewish people from a life of tyranny and brutality, many Jewish hearts were turned to Ukraine.

Hovering also were memories of our own more recent destruction at the hands of the Nazis, along with a reminder that for countries under siege to survive, they must have the will and means to defend themselves.

Nowhere were these thoughts more prevalent than in Israel. As a recent Israeli Foreign Ministry statement said: “The images of refugees fleeing war in Europe have undoubtedly evoked the memory of our own grim moments, and we therefore feel especially compelled to help.”

Facilitating that help and educating about all that Israel is doing to assist Ukraine have been top priorities for Israel’s overseas diplomatic corps since the Russian invasion began Feb. 24.

Humanitarian aid has been provided, refugees have been absorbed, and political support has been affirmed as Israel has stepped forward to help.

Israel, for example, was the first country to set up a field hospital in the war zone, a complex operation that often is critically needed in theaters of conflict.

Among countries that don’t share a border with Ukraine, Israel proportionately has taken in the most refugees overall.

On the political front, Israel recently was among the countries that voted to remove Russia from the United Nations Human Rights Council.

Closer to home, Israel’s Atlanta-based Consul General to the Southeast, Anat Sultan-Dadon, was part of a broad cross-section of Consulate officials based in Atlanta who a few days ago issued a statement condemning Russia’s invasion.

“We stand united in condemning Russia’s unlawful aggression against Ukraine and demand the immediate cessation of hostilities and the withdrawal of all Russian troops and foreign fighters in their service from the territory of Ukraine,” proclaimed 16 signatories representing a wide array of countries.

Yet, the situation arguably is more complicated for Israel vis a vis Russia than those other countries.

Despite its support for Ukraine, Israel has a tough challenge that requires it to balance principles, politics and practicality to protect the lives of its own people.

Moreover, the Iranians have established a considerable military presence, both directly and through proxies, in Syria and Lebanon, countries on Israel’s northern border, a region where Russia also has a major presence.

Through an understanding between the Russians and the Israelis, Russia, which controls the skies, has given Israel the green light to operate against Iran and its proxies.

“The Israeli military says it has carried out more than 400 airstrikes in Syria and other parts of the Middle East since 2017 as part of a wide-ranging campaign targeting Iran and its allies,” the Wall Street Journal recently reported.

Making the situation more challenging is Israel’s concern about the well-being of Ukraine’s and Russia’s sizable Jewish populations. Ukraine has an estimated 200,000 Jews eligible for Israeli citizenship; Russia has 400,000.

Knowing that any evacuation of Jews would have to be coordinated with each country’s government, it is crucial that Israel maintain its relationships with the leaders of both Ukraine and Russia.

Israel walks a tightrope. This was underscored when Russia warned countries prior to the UN Human Rights Council vote “that a yes vote or abstention will be viewed as an ‘unfriendly gesture’ with consequences for bilateral ties,” according to Reuters.

On another sensitive front, Israel has been asked to provide Ukraine with weapons.

Yet, just as the U.S. has refrained from allowing Ukraine full access to America’s arsenal and turned down other appeals from Ukraine such as creating a no-fly zone for fear of winding up in a direct conflict with a nuclear-armed Russia, Israel is trying to navigate the situation without escalating it, especially with Russia on its northern border.

Meanwhile, there are no easy answers, and the situation in Ukraine continues to be unnerving and horrifying.

Israelis and Ukrainians, as well as others including the U.S., had hoped that Israel’s unique position — having relationships and ongoing conversations with the leaders of both countries — could play a role in creating a path to negotiations that could somehow bring this tragedy to an end.

Could this still happen?  It remains to be seen.

What is clear are the sentiments behind a statement Ukraine’s Jewish president Volodymyr Zelensky made recently when he said that for his country to survive, it is going to have to become more like Israel.

In other words, Ukraine’s dream of being a peaceful and secure Western-style democracy may remain elusive, given that no matter how this conflict ends, Russia will still be on Ukraine’s border.

Like Israel, Ukraine might have to become a country constantly on alert simply to survive; a nation forced by fate to make excruciating choices, as it strives to balance acute security needs with an enduring commitment to its principles and ideals.