The power of community, extended 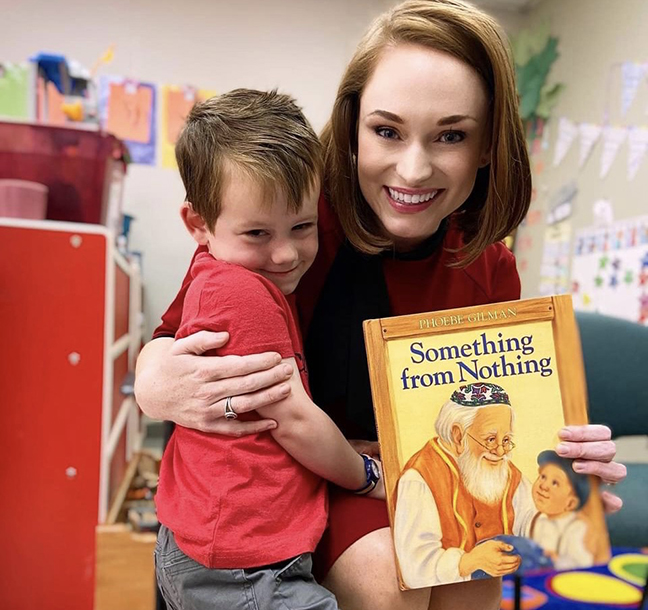 That comes from Lillian Askins Lalo as she reflects on her lifelong ties to Birmingham’s Jewish community, from elementary school to becoming one of Alabama’s best-known TV journalists — and through the devastating loss of her husband, Christopher, who took his own life nine months ago.

Lalo, a 33-year-old Christian with fiery red hair and a personality bubbling with warmth and charisma, talks about Birmingham’s close-knit Jewish community, and especially her Jewish friends, with love, gratitude and admiration.

Growing up in Mountain Brook, Lalo’s first encounter with the Jewish community came in fourth grade when she took swim lessons at the Levite Jewish Community Center.

At Brookwood Forest Elementary School, lasting friendships were formed with Jewish classmates. “The Jewish girls were so cool,” Lalo recalled with a smile, remembering the fun she had at Bat Mitzvahs.

Never could this TV personality have imagined that 20 years later those lasting friendships would help sustain her during her darkest days.

It was at Brookwood Forest that a Holocaust survivor, Riva Hirsch, grandmother of a Jewish classmate, spoke to her sixth-grade class.

Though only 12, that encounter deepened Lalo’s understanding of the resilience, love of family and community, and compassion that she saw in the families of her Jewish friends.

Two decades later this awareness would turn into awe as Jewish friends and other Jews she barely knew put a collective arm around her shoulder after her husband’s suicide.

Meals poured in, long-time friendships deepened, new ones blossomed, and help was offered in every way imaginable.

A JCC leader in another part of the country who learned of Lalo’s situation through a mutual friend went to bat for her, successfully appealing a life insurance claim on Lalo’s behalf after it had been denied because of a technicality in the timing of her husband’s death.

Sitting in a cluttered dressing room on a recent April morning, after co-anchoring CBS-affiliate WIAT-42’s 4:30 to 7 a.m. show, Lalo, not used to being interviewed herself, spoke with emotion.

“When Chris died, I came to see the Jewish community is first to reach out in any kind of crisis and to act. You can count on your Jewish friends. They show up. Even people you don’t know step forward, such as the man who helped me appeal my insurance claim.”

One Jewish friend who has always shown up for Lalo is Samantha Dubrinsky. They became close in sixth grade after bonding over a shared love of figure skating.

Dubrinsky would become executive director of the LJCC, later taking a similar job in Springfield, Mass.

“Though Lillian and I grew up in a community that was and still is mostly Christian, I believe our faith differences made us closer. Lillian has always approached the unknown with curiosity and understanding — that’s what makes her a great journalist.”

“Lillian’s dad told me she has always loved Jewish people and at one point even wanted to be Jewish. He couldn’t remember why, though he did recall Lillian wearing a Star of David necklace to school on Jewish holidays!”

Lalo’s attachment to the LJCC has never waned. In a previous marketing position at CBS 42, she produced two well-received promotional videos for the LJCC, assignments that rekindled her swim memories.

But it was another decision that Lalo would make, guided by Dubrinsky, that would have powerful implications for her husband, her, and their son.

“When their little boy was two and Chris’ mental health plight started to become more severe, I told Lillian about the LJCC preschool,” said Dubrinsky.

“I knew the preschool would provide a nurturing environment for their family and especially their son. Lillian enrolled him without hesitation, wanting to expose him to different faiths and backgrounds and expressing deep appreciation for the Jewish community.”

After four years of struggling with suicidal ideations — recurring suicidal thoughts and impulses — 32-year-old Christopher Lalo took his own life.

The tragedy and story of this young family rocked Birmingham and beyond. Lalo, delving deep into her heart as a wife and mother while drawing on her journalism skills, began writing powerfully about their family’s saga, to educate about mental illness.

At the same time, the LJCC preschool community swung into action, providing Lalo and her son with love, support, and something else — a precious gift for her little boy. Chris had a collection of t-shirts. Preschool staff took the shirts that his son remembered his father wearing the most and turned them into a colorful patchwork blanket.

“When Lillian’s husband passed away, our first thought was for her son. We wanted to do something to express our sympathies and comfort him,” explained Barbara Traweek, director of the LJCC’s Cohn Early Childhood Education Center.

A staff member came up with the blanket idea and enlisted others, including the boy’s teacher, to help.

“This was an incredible gift,” said Lalo. “Chris and I met when we were freshmen in college. We were together 15 years, and we would buy t-shirts to preserve memories. The blanket was a beautiful gift, a unique remembrance of Chris and an amazing present to my son. He will now have these memories and stories about his dad as his life goes forward.”

There’s an additional dimension to the blanket story.

Recently, Lalo posted a picture of herself on Facebook reading to her son’s class. She was holding a Jewish-themed book, “Something from Nothing,” distributed by PJ Library, a widely hailed initiative of the Harold Grinspoon Foundation that began in Massachusetts and now distributes free Jewish books to children in North America and beyond.

Lalo, a Presbyterian, actually had her own copy of the book while growing up, which she still has. Her mom had seen it, liked it, and bought it for her five-year-old daughter.

Written by children’s author Phoebe Gilman, “Something from Nothing” tells the story of a Jewish boy, Joseph, whose grandfather makes him a blanket when he’s a baby.

As he grows up, the blanket becomes worn. Yet as the years unfold, the grandfather, adept at cutting and sewing, creates other things for Joseph from the blanket’s scraps, such as a vest, and later out of the vest, a tie.

Then one day there is nothing left of the blanket, not even a shred. What remains for Joseph are memories of his grandfather’s love and the story of the blanket itself, treasures he clings to tightly.

As the interview ended, Lalo pondered the message of “Something from Nothing” – and then it clicked.

The t-shirt blanket may become faded over the years and even torn. Yet, more lasting than the blanket will be the story of its creation, and memories of Chris as a loving father, husband, and friend.

These legacies will endure.

Along with the Jewish friendships that have hugged Lillian Askins Lalo throughout her life, embracing her like a loving mom.