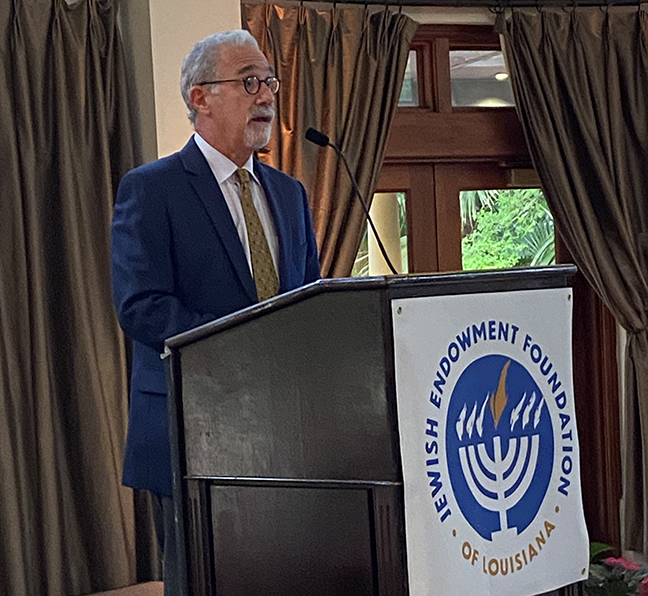 Bobby Garon at the April 24 event

Passing the $100 million mark in managed assets wasn’t the only big news at the Jewish Endowment Foundation of Louisiana’s gala on April 24. At the dinner, JEF announced that it recently received a legacy gift of over $6 million, the largest donation in the Foundation’s 55-year history.

The gift came from the estate of Dorlene Lauferski Alaynick and will support and endow organizations that she cherished during her lifetime.

One-time grants will be distributed to 33 nonprofit organizations across the country. The remainder of her gift will be separated into four designated funds for long-term growth and philanthropy for the benefit of JEF, the Jewish Federation of Greater New Orleans, Hadassah New Orleans, and the Louisiana Society for the Prevention of Cruelty to Animals.

Alaynick, who died in January 2021, had worked with Sandy Levy, JEF’s previous executive director, and Carole Neff, a partner with Sessions, Fishman and Nathan, to create her lasting legacy.

“We are pleased to carry on Dorlene’s history of giving to the local, New Orleans community,” said JEF Executive Director Bobby Garon. “These designated funds provide us the opportunity to honor her thoughtful philanthropic planning and foresight to leave generous funds for tomorrow’s needs.”

Alaynick moved to New Orleans in the early 1960s, utilizing her enterprising business acumen and creativity to become the cosmetics buyer for the Maison Blanche department stores. Throughout her life, she was an active and devoted member of Temple Sinai; past president of the Hadassah New Orleans Chapter; part of the New Orleans Garden Society; a volunteer at East Jefferson Hospital; and life-long supporter of many animal rights organizations.

Alaynick was passionate about animals, her friends, and supporting the New Orleans Jewish community. She was preceded in death by her husband, Moise Alaynick, and her two sisters, Dorothy and Ruth.

“Anyone who was acquainted with Dorlene knew her to be kind and generous, even though she was never one to seek recognition for her actions,” said Levy. “The magnitude of her gift was quite unexpected coming from such a humble woman, but these transformative gifts will truly create a legacy that will be recognized for years to come.”

At the JEF annual event on April 24, Garon said the gift is the largest unrestricted gift in JEF history, and will be the largest Lion of Judah endowment in Federation history. The Lion of Judah Society is for women who contribute at least $5,000 each year to the Annual Campaign.

Neff, Alaynick’s estate planning attorney, added, “Although Dorlene made many changes to her estate plan over a number of years, one aspect never changed — her desire that the bulk of her estate world be left to her beloved charities.”

JEF will invest and manage the four designated funds so they will grow over time, while also distributing the income annually to each of the four organizations to support their charitable work. After 20 years, the principal and any accumulated income of each fund will be distributed outright to each organization.

“Our mission is to ensure a secure future and an enduring legacy by serving as an essential resource for Jewish and non-Jewish philanthropy,” added Garon. “Dorlene’s estate gift is an example of the power of planned giving, advancing JEF’s capacity to meet the community’s most immediate needs and making the world a better place for future generations.”