Opinion: Abortion access is a church-state issue of religious liberty 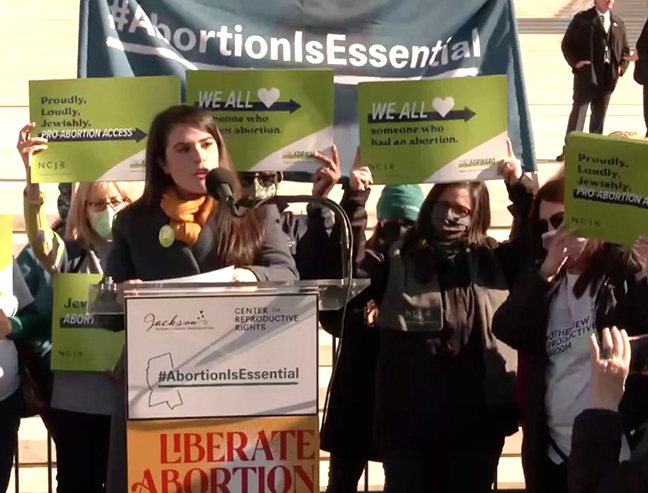 National Council of Jewish Women President Sheila Katz spoke at the Abortion Is Essential rally on the Supreme Court steps on Dec. 1, 2021, as hearings were held on the Mississippi abortion law.

Editor’s Note: In the wake of the leaked news about a pending Supreme Court ruling, we are posting our editorial that ran in the August 2021 print edition.

Mississippi is at the epicenter of a major church-state battle that could have repercussions for decades.

The United States Supreme Court is considering a Mississippi test case that bans most abortions after 15 weeks, after the 5th U.S. Circuit Court of Appeals blocked enforcement of the law.

In recent years — but before a couple of Supreme Court retirements — the court struck down six-week and 12-week bans, and a Texas law that significantly hampered the ability of clinics to function. The Mississippi case is seen as a test of whether a more conservative Supreme Court will take the opportunity to strike down Roe v. Wade, the 1973 decision that stated women had the right to decide whether to have an abortion, without excessive restriction by governments.

Many states have since made a sport of pushing the envelope of what could be considered “excessive,” and activist groups have been hoping for an eventual ban on the procedure.

Mississippi is among 11 states with “trigger laws” that would automatically ban abortion if Roe v. Wade is overturned. Some estimate that about 24 states would eventually ban the procedure.

Mississippi Attorney General Lynch Fitch has been particularly vocal, saying Roe was “egregiously wrong” and that “nothing in constitutional text, structure, history or tradition supports a right to abortion.”

How, then, is this a church-state issue that endangers the free exercise of religious beliefs?

For all the talk about how we live in a “Judeo-Christian” society, this is one of numerous times where the Judeo and the Christian do not see eye to eye. There is a fundamental difference in how the two view the unborn.

For opponents of abortion, life begins at conception and abortion is murder. In Jewish law, a fetus under 40 days is considered “mere water,” and throughout pregnancy the fetus has the same status as a limb of the mother. Only at birth is personhood conferred.

A good part of the difference is religious in nature (though this explanation is going to be vastly simplified, as there are many differences of opinion). In Christianity, one is born a sinner because of the original sin with the fruit in the Garden of Eden — it taints all of humanity, and because that sin separates people from God, the only way around that is through faith in Jesus as the savior and intermediary.

In Judaism, there is no concept of being born with original sin, one is born as a clean slate, and isn’t held religiously accountable until Bar or Bat Mitzvah. Not to mention that Judaism doesn’t share the heaven-hell afterlife expectation that Christianity has.

Clearly, the passion many have about abortion is religious in nature. But the United States is a secular nation in terms of how laws are made, even with the idea that the natural law spoken of by the Founders comes from the divine.

The dichotomy has other implications — there have been many Jews who have been leery of giving birth in a Catholic hospital, because of fears that if there is a complication and only one or the other will survive, the inclination in the hospital would be to focus efforts on the unborn. After all, the mother has already had her chance to be “saved.”

In Jewish law, the primary effort should go to protecting the mother, not only because of the difference in status, but because there may already be other children who depend on her, and the harsh-sounding but realistic view that one can always try again.

If a woman needs to have a leg amputated, nobody thinks twice about it. Since Jewish law considers the fetus to be similar to “a limb” of the mother, the same applies if necessary to preserve her life or health — even late in the pregnancy. Of course, that is the legal view and has nothing to do with the emotional aspects of having to undergo such a decision.

In no way, however, does this mean that Judaism accepts abortion on demand, and despite what opponents of abortion state, it is almost never a decision done on a whim or taken lightly, it is often highly traumatic and made more so by the intervention of activists who know nothing of an individual’s circumstances.

There are certain times under Jewish law where not only is abortion permitted, it is mandated, in order to put the well-being of the woman first.

One can look at the rules and state that abortion is justified only if the mother will die from the pregnancy. Such cases are very rare.

Even many Orthodox authorities, who are generally the least lenient, also take into account severe abnormalities — which could hamper a mother’s ability to take care of other children — the mother’s mental health, or when a pregnancy comes from rape or incest. But even in those cases, the preference is to examine each case on its own merits.

A one size fits all law doesn’t allow for that.

The Reform and Conservative movements have issued rulings taking into account the mother’s mental state, or if carrying a particular pregnancy to term will result in physical damage that would prevent future pregnancies.

But whatever the rationale, and wherever most people in the Jewish community stand on what circumstances should or should not be permitted, there is an overwhelming sense that the least appropriate venue for those decisions is legislative buildings or courthouses.

For governments to ban abortion altogether means a violation of Jewish law in the cases where the mother is endangered. It is not a contradiction to want the government to get out of the decision making process while desiring a society with as few abortions as possible.

If the number of abortions is an issue, there may well be other factors at play, other than accessibility. Take Israel, for example.

Israel has rather liberal abortion laws, and a much lower abortion rate than the U.S., though the rate in both countries has fallen dramatically in recent years. In Israel, a woman can seek an abortion if under the age of 17 or over 40; if not married or the pregnancy is not from her marriage; cases of rape or incest; danger to the woman’s life, including physical or emotional damage; or in cases of severe physical or mental abnormality. Minors need not seek parental permission, an issue that sends American pro-lifers into conniptions.

A woman seeking an abortion in Israel goes before a three-person panel that includes an OB-GYN, an additional medical specialist and a social worker. There is no mandate for a religious authority or a government representative to be present. The panels approve roughly 98 percent of cases.

And yet, despite abortion being legal and paid for by Israel’s universal health care, the rate of abortion there is half that of the U.S.

If Roe is overturned, the U.S. will once again be a patchwork of states regarding the accessibility of abortion, and we have no illusions about what that will look like in our region.

For the sake of religious liberty, a ban on abortion is not the answer. If opponents of abortion want to make a dent in the numbers — which indeed have been declining — the answers lie more in societal attitudes toward life and parenthood, not in the accessibility. But changing societal attitudes is a much harder battle to fight.