Home field: With World Games coming to his city, Ron Froehlich reflects on his decades of service to sports 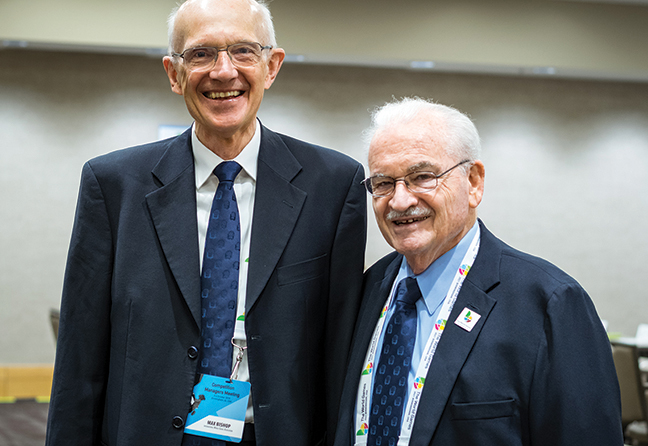 For decades, Ron Froehlich has traveled the world to attend every edition of The World Games, before, during and after his time as president of the International World Games Association.

This summer, the world travels to him, as the 2022 World Games are in his backyard, in downtown Birmingham.

The World Games are held every four years, one year after the Summer Olympic Games. Birmingham’s World Games were supposed to be held in 2021, but Covid pushed the 2020 Tokyo Olympics to 2021, moving The World Games back a year.

In the 2021 Olympics in Tokyo, Japan beat the U.S. in the gold medal game in softball. Both teams have qualified for The World Games, and Froehlich hopes there will be a rematch in Birmingham.

As the Honorary Life President of the International World Games Association, Froehlich has been Special Advisor to the Birmingham Organizing Committee. He was president of the Games from 1993 to 2014.

But the World Games is just part of his long sports career, which led to the Alabama Sports Hall of Fame naming him as a Distinguished American Sportsman in 2015.

Talking to Froehlich, one of the first things one notices is his distinct Southern accent — as in South African, as he is a native of Johannesburg, and started his sports journey with trampolines.

The trampoline industry in South Africa began with Ron Munn, a Texan who was the U.S. trampoline champion in 1959, and Olle Areborn, as the two of them established the Trampoline Company of South Africa in 1960. But back in Amarillo, a letter was waiting, informing Munn of his U.S. military service obligations, so he decided to sell his interest to Areborn in 1962, and suggested that the company merge with a new competitor.

That competitor, Ron’s Trampoline, was started by Ronnie Lombard, a two-time Olympic gymnast for South Africa who owned a high-end men’s clothing store, and who also saw the growing trampoline craze and went into that business with a close friend — Ron Froehlich.

The companies merged in 1963, and the next year was the first World Open Trampoline Championship, in London, as the sport continued to grow.

In 1966, Froehlich became vice president of the South Africa Gymnastics Association, a position he would hold for 10 years, until the Froehlichs moved to the United States. He said that position involved a lot of travel to other countries “to make sure we weren’t kicked out” because the growing anti-apartheid movement around the world was pressuring for boycotts of South Africa.

He also became involved with the South Africa Amateur Trampoline Union as treasurer, then became president. He was then elected secretary-general of FIT, the International Trampoline Federation, and in 1974 the world championships were held in Johannesburg.

After moving to Birmingham in 1976, he became involved locally as well as internationally. He is credited with bringing the World Trampoline Championships to Birmingham in 1988, and had a major role in the U.S. Olympic Committee naming Lakeshore Rehabilitation Center as a designated training center for the Paralympics.

In 1981, he went to Santa Clara, Calif., in his role with FIT to see the first World Games. The idea was to have a world stage to promote sports that are not part of the Olympics. “Trampoline was in it right from the start,” he said, and soon he was asked to be involved with The World Games.

In 1989, he was asked to be part of a group to help draft a new constitution for the International World Games Association. The new constitution was ratified in Monaco in 1990, and Froehlich was elected vice president.

At the time, the IWGA was under financial difficulties, which he had to sort out as acting president, then in 1993 he was officially elected president, a position he held until 2014. At the 2014 annual meeting, he was named Honorary Life President of the IWGA.

As World Games president, he signed the first Memorandum of Understanding with the IOC, and the IOC president attends the opening ceremonies of The World Games.

He became an executive member of USA Gymnastics and was chairman from 2001 to 2008. He also became a member of the International Olympic Program Committee from 2002 to 2014.

Even before his Olympic involvement, he spent the entire day in Birmingham with the Olympics group that was assessing possible venues for soccer in the 1996 Atlanta Games, culminating in a huge crowd in the Alabama Power headquarters atrium chanting “we want soccer!” Birmingham landed the soccer matches.

In 2010, Froehlich was the IOC recipient of the Olympic Order, the highest award in the Olympic Movement. Though he calls it a highlight and a major honor, he does not wear it at events. “I’m not that kind of guy.”

This is the first time The World Games has returned to the United States since 1981, and it has progressed dramatically since Santa Clara, Froehlich said. The first games were held in a university setting, with 58 countries and about 1,400 athletes. The second Games, held in London in 1985, started the development of the Games, and the 1989 Games in Karlsruhe, Germany, “really turned it around.”

The two most successful games, he said, were 2009 in Kaohsiung, Chinese Taipei, and 2013 in Cali, Colombia. The 2009 Games were highly organized, with dedicated World Games lanes to the stadiums, and when there was difficulty getting aircraft for a parachuting event, they met with the president, who called the military and instructed them to supply whatever was needed.

The Colombia Games were “the people’s Games,” Froehlich said. “You could not believe how they celebrated, the whole city.” Two days after the opening ceremony, there were no tickets left for any event, and large crowds gathered outside the venues to watch on big screens and party.

At the harbor, a plaza was constructed, with a performance stage to one side, and he said about 1.2 million people visited.

Birmingham will have a plaza under the new Interstate 20-59 corridor, with two stages. “This is going to be the meeting place for the Games,” and he hopes there will be 1 million visitors.

Though Birmingham was selected during Froehlich’s final term as president, he stressed that he was not part of the decision, but “being the president, I still got the reports.” Russia and a South American venue were competing with Birmingham, and he said all three had great proposals.

A major rule for communities bidding on the World Games is that, unlike the Olympics, new facilities are not to be built specifically for the games — existing infrastructure is to be used, including for housing athletes.

The athletes will mainly be at the University of Alabama at Birmingham and Birmingham-Southern College, and there will be a highly diverse food program. Some athletes require plenty of starch, others need salads, and kosher and Halal needs will be met.

He credits Edgar Welden as a major factor in the decision to come to Birmingham. “He organized a breakfast for IWGA with the top companies in the city,” Froehlich said. World Games Vice President Max Bishop could not believe that the CEOs of all those companies made the time for the breakfast and all pledged to support the Games. After co-chairing the committee to land the Games, Welden stepped down in 2016.

Froehlich said the city will be on the world map of sport because of The World Games. “Hopefully this will lead to other events coming to Birmingham — world championships, World Cups, regular events.” He added, “Birmingham is capable of doing it. They have the facilities.”

He also emphasizes the opportunity for the region as a whole. In talking about the Games, “we always go Birmingham, Alabama, United States.”

While Birmingham is currently identified as the home of the newly-reconstituted United States Football League, The World Games’ flag football competition is being sponsored by the National Football League. “That’s a big move,” Froehlich said.

Flag football will be one of the sports making its way into the Olympics for the 2028 Games in Los Angeles, along with lacrosse, and Froehlich thinks competitive climbing, which will be at the World Games, will also be in the Olympics.

How did the Froehlichs wind up in Birmingham?

A friend in South Africa’s Jewish community had twins, and one had a hole in his heart. The family was referred to the University of Alabama at Birmingham for a last-resort procedure with a high failure rate.

Another friend knew Hazel and Melvin Olshan in Birmingham, and contacted them, asking them to take care of the family while they were at UAB. The surgery was successful, but the child was so weak, he died the next day. Still, the family returned to South Africa with words of praise for the Olshans and Birmingham.

Later, Froehlich was in Cedar Rapids on business, and contacted the Olshans to thank them. “They talked me into flying down here,” where they introduced him to Karl Friedman. “Then I started coming back every year.”

In 1976, with the Soweto uprising and its turbulent aftermath, he called Friedman and said “I think we want to move to the U.S.,” so Friedman contacted Alabama Congressman John Buchanan’s office to start the process.

When they arrived at their new home, they found it furnished and the refrigerator stocked. In addition to his sports involvement, he became involved in the community, serving as president of Temple Beth-El.

Birmingham “is a good city to be in,” he said.