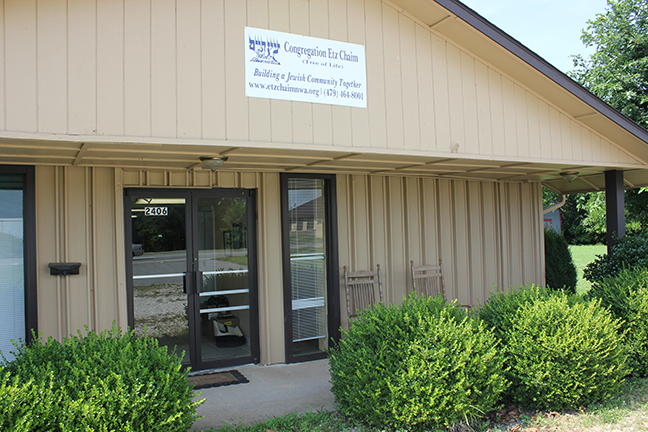 The home of Etz Chaim in Bentonville until a flood in 2014. SJL file.

On June 10, Congregation Etz Chaim of Northwest Arkansas in Bentonville held its final service. The service was held at Temple Shalom in Fayetteville, where the Etz Chaim memorial board will be housed.

According to President Jodi Prohofsky, the closing was “unavoidable” because membership was at an all-time low and not enough people were volunteering to keep the congregation going.

The congregation’s membership mainly consisted of employees of vendors to Wal-Mart, who were rotated in and out of the community and rarely stayed for more than a few years, making consistency difficult in the congregation’s activities.

The congregation was established in 2004 by 12 families, none of whom were native to the area. The next year, they purchased a former church and established the first synagogue building in Benton County.

In 2014, the building flooded, so they found a new home at Waterway Church. They finally found a small space of their own in December 2019, but when Covid hit, services went virtual.

In 2021, Cantor Sam Radwine, who had retired to the area with his husband, was ordained as a rabbi after leading the congregation for four years. Because of the pandemic, the ordination ceremony was done virtually, making him joke about being the only rabbi ever ordained in Prairie Creek.

On Jan. 23, Etz Chaim decided to cut back the remote services to monthly, along with the news that Radwine had stated he would not be renewing his contract. Prohofsky wrote at the time that “we can’t thank him enough for all he has done for the congregation, for the community, and for so many of us personally.”

The board of Temple Shalom expressed “sadness” at the news, saying “Given the small size of the Jewish community in NWA, our congregations have  always been intertwined, and we want to make sure that you, your members, and your  guests know that you are welcome at Temple Shalom events and services whenever you  may need community.”

A closing message from the Etz Chaim board stated that “many of our members will continue to be in the (Northwest Arkansas) area and therefore we are hopeful for continued opportunities to come together as a Jewish community.”