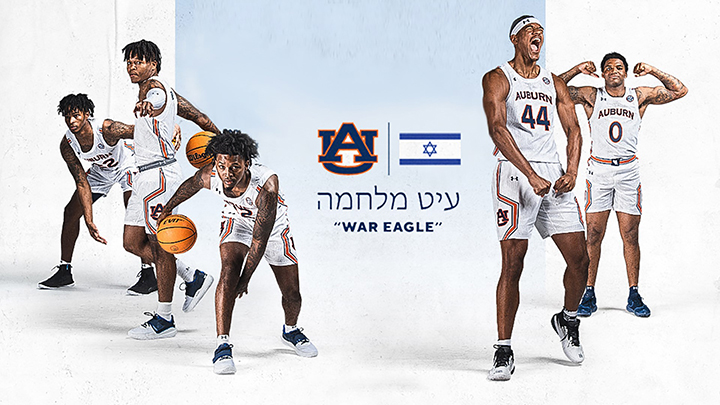 Auburn University is set to make history as the first Power 5 basketball team to do a preseason tour of Israel.

Auburn will play three games against Israeli national teams during the July 31 to Aug. 10 trip, and all three games will be televised on the SEC Network.

According to NCAA rules, college basketball teams can do an overseas trip once every four years. Auburn’s last overseas trip was Italy, in 2017.

The only other Division I-A team to visit Israel was the University of Connecticut, in 1998. The following season, UConn won its first national championship.

“This experience, academically, historically and religiously, will have a forever effect on our student-athletes,” Pearl said. “As a Jewish-American college basketball coach, I am honored and blessed to share this experience with our Auburn Basketball Family. Birthright for College Basketball in Israel will become one of the most sought after and impactful foreign trips in the future.”

Pearl said this trip, and the concept of an Israel tournament for college basketball programs, has been a dream of his for several years. He told Aaron Fruh’s Israel And You podcast that “This is the beginning of an annual August event. Auburn is taking the first trip so I can get this tournament started, and in the future we are looking to bring over the best teams in college basketball.”

Pearl is on the board of Fruh’s Israel Team Advocates International.

Auburn will play Israel’s U-20 national team on Aug. 2 at Malha Arena in Jerusalem. Pearl said that game will be against players who are comparable in age to a college team.

At Sport Palace Tel Aviv Yafo, Auburn will play an Israel All-Star Select Team on Aug. 7, and the Israel National Team on Aug. 8. The national team is Israel’s best players, Pearl said, the team that Israel would put on the floor for the Olympics to compete when the U.S. assembles its national team of NBA players. “That will be all we can handle,” Pearl said.

The games will tip off at 8 p.m. in Israel, so the live broadcasts on the SEC Network will be at noon Central. Auburn is just the second school to have its foreign tour aired on SEC Network, after the 2014 and 2018 Kentucky tours. Kansas and several other Division I schools have had its foreign tours streamed online.

Off the court, Auburn will visit Bethlehem, Yad Vashem, City of David, the Dead Sea, Jerusalem’s Old City and the Sea of Galilee.

With Israel’s passion for basketball and rising profile internationally, Pearl said it is entirely possible that some of his players would eventually wind up playing in Israel professionally.

The Tigers’ travel and international competition have been a collaboration between Pearl, Complete Sports Management, the Israeli Basketball Association and Athletes for Israel.