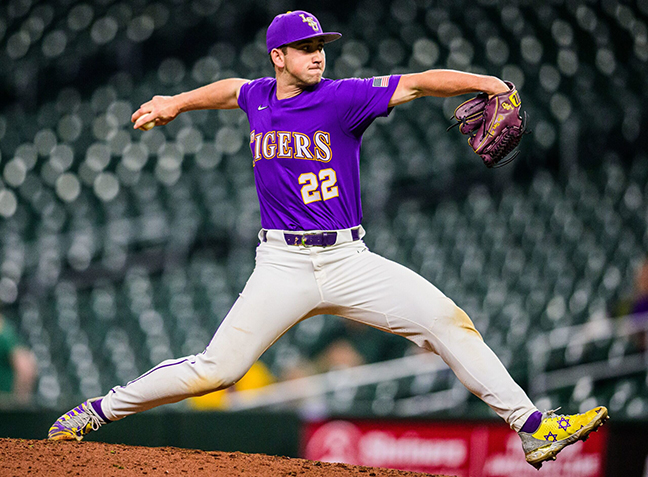 (JNS) — If everything goes according to plan, Eric Reyzelman may become the most Jewishly connected and affiliated Major League baseball player in history.

Of course, there is a long road ahead for the friendly, hard-throwing 21-year-old Californian recently drafted by the New York Yankees. But to date, his Jewish credentials are almost as impressive as his pitching ones; the list of accomplishments already includes Hebrew school, bar mitzvah, a family trip to Israel and naches shepped (Jewish pride enjoyed) by parents and grandparents.

Reyzelman, a 6-foot-2 right-hander currently pitching for Louisiana State University, was the 160th overall pick in the fifth round of the draft on July 18. He spoke with JNS from Tampa, Fla., where he will begin his Major League career at the Yankees’ development facilities.

While he had hoped to be picked by a big team, he says he still finds the experience surreal. He was watching the draft in a restaurant with his family and some close friends: “It was one of the craziest moments of my life. It was unreal. I was surrounded by those who got me here!”

He reports that the TV was delayed at the time, and he actually began getting calls from an “area scout” and friends before he received the official word from the Yankees. “I took my time enjoying the news,” he says, “and then they told us we’d be flying to Tampa in a day.”

Reyzelman notes that packing on short notice was no problem; after all, he quipped, “I have been living out of a suitcase for the past two years — going from San Francisco [SF Dons of the West Coast Conference] to LSU to Southern California to the Cape Cod League [Harwich Mariners] to LSU to Southern California to Cape Cod!” His mother, chiropractor Victoria Reyzelman, accompanied him and helped him get settled in Tampa. He says he works out daily from 8:30 a.m. until mid-afternoon.

Reyzelman and the 20 other players drafted by the Yankees will continue training at the southern facilities. “There are a ton of options to get some innings in,” says Reyzelman, who doesn’t yet know how he will spend the rest of the season. He may remain in Tampa and play in the rookie league; he may play for the Tampa Tarpons, the Minor League Baseball team and Single-A affiliate of the Yankees; or for the Hudson Valley Renegades in Fishkill, N.Y., the High-A affiliate.

‘It is an unbelievable, indiscernible feeling’

Reyzelman being drafted by the Yankees is especially impressive given some of the obstacles he encountered growing up. He was cut from his high school team twice, and underwent and recovered from Tommy John (ulnar collateral ligament) surgery.

He grew up a San Francisco Giants fan, watching multiple Cy Young Award winner Tim Lincecum pitch. While Reyzelman enjoyed watching games, he acknowledges that “the eighth and ninth innings were the parts of the game with the most action!” Given his interest in late-game excitement, Reyzelman also loved watching Yankees closer Mariano Rivera. He also liked watching Yankee CC Sabathia pitch.

“It was an unbelievable group!” he gushes (just a bit).

The 21-year-old knows what a big deal it is to join the legendary organization and can’t wait to actually wear pinstripes. “It is an unbelievable, indiscernible feeling knowing their rich history and the number of fans they have everywhere. You say ‘Yankees’ all over the world and ears perk up. It is crazy to think I am part of this incredible organization!”

Still, Reyzelman is quick to note that his older 6-foot 5-inch, 250-pound football-playing (formerly a player at Fresno State University) brother is the “true athlete of the family.” He is also proud of his 13-year-old brother who is “obsessed with baseball.”

His parents and grandparents are relatively new arrivals on the baseball scene. While his father, Alex Reyzelman, a podiatrist, came to the United States from Moldova as a child, his mother, Victoria, a chiropractor, came to America from Ukraine (via Italy) in 1989. “My mother was here with me from the time of the signing until now; she just went back home,” he says. “My parents love it. We talk every day, and my dad loves getting updates.”

He notes that his grandparents are also enthusiastic supporters, despite arriving “late to the game,” so to speak

“My grandparents got into it when I was at the University of San Francisco [before transferring to LSU]; they started streaming every game,” he says. “Now, my grandmother who came from Moldova knows baseball and asks questions like, ‘Why was this pitcher taken out?!’ ”

“We grew up in a pretty strong Jewish family,” reports Reyzelman, who went to Hebrew school and whose family was very active with Chabad of the Tri-Valley in Pleasanton, Calif. — some 38 miles southeast of Oracle Park, home of the San Francisco Giants. He celebrated his bar mitzvah there under the tutelage of Rabbi Raleigh Resnick. “We have made so many friends there and made so many connections. I am pretty sure I could pick up my Torah portion now if I reviewed it a few times!”

He credits the rabbi with connecting him to Chabad centers and rabbis in Louisiana, and now in Tampa. “After I transferred to LSU, I was trying to get involved. The rabbi in Baton Rouge went out of his way to make me feel comfortable.”

Rabbi Peretz Kazen from Chabad at LSU spoke glowingly of Reyzelman’s Jewish pride, saying “we’ll miss Eric at our Shabbat table, proudly wrapping teffilin on campus, but hey, we may get him back one day as a pro, to up his game at Menorah lighting, to kindle the one at the State Capitol.”

At the campus Chanukah celebration on the Parade Grounds this past year, he was honored with lighting the menorah.

Jay Johnson, head baseball coach at LSU, is excited about Reyzelman and his future, saying “he is a true testament to work ethic, determination and perseverance. Eric had a terrific season this year for us and is really prepared to have success with the Yankees organization.”

The 21-year-old finished three years of college, studying kinesiology at San Francisco and then sports administration at LSU. He’ll be leaving to play professional ball.

The coach adds that “he has a Major League-ready fastball and the ability to add to his arsenal as he works through Minor League Baseball. I believe the best is yet to come for him as a pitcher.”

As for Reyzelman, he says he would love to don No. 18 on his Yankees uniform if given the chance: “That would be awesome. It was always lucky in my family and in Judaism, though I am not so big on numbers.”

He makes it a point to note that he appreciates the Jewish players who have come before him. He especially admires baseball legend Sandy Koufax. “We all know the story. He definitely has to be one of the biggest. And I didn’t know until recently that Ian Kinsler [MLB legend and current Team Israel manager] is Jewish!”

Reyzelman has been following Team Israel and has watched (and re-watched) the 86-minute documentary about them called “Heading Home: The Tale of Team Israel.” He says, “I know the whole team from the documentary,” and adds that he would welcome the opportunity to play for Israel’s baseball team — in fact, “I am trying to get it set up for next year.”

He also acknowledges that he would be eligible to play in the World Baseball Classic qualifiers but would need to become a citizen of Israel to potentially play in the Olympics.

Peter Kurz, general manager of Israel’s Olympic and National teams, replies that he would be thrilled to see Reyzelman one day wearing the blue and white. He is also delighted to see him playing in New York — sort of.

He notes dryly, “as a Mets fan, he should be going to Queens…”