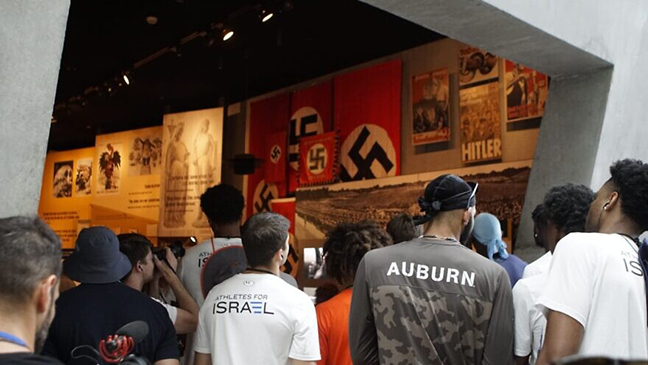 (JNS) — As part of a trip to Israel to play basketball, the Auburn Tigers, a Division 1 NCAA college basketball team from Alabama, visited Yad Vashem, the World Holocaust Remembrance Center in Jerusalem.

Yad Vashem chair Dani Dayan greeted the players and their coach, Bruce Pearl, recounting for them a tour he took of the Civil Rights Trail when he served as consul general for the State of Israel in New York.

“Like my trip in the footsteps of Rosa Parks and Martin Luther King Jr., your visit today to Yad Vashem is a journey through history,” he told the college students. “The Holocaust is the representation of humanity’s lowest point at a time when all morality and justice were lost to an ideology that deemed Jews subhuman.”

He stressed that “today, we must fight hatred and antisemitism in all its forms in order to ensure that history is never allowed to repeat itself.”

At the end of the visit, the group visited the Children’s Memorial, dedicated to the 1.5 million Jewish children murdered by the Nazis and their collaborators.

Pearl, whose Hebrew name is Mordechai, signed Yad Vashem’s guest book on behalf of his team.

Back in mid-March, an Auburn Tigers’ press conference went viral when Pearl recounted the story of Purim and the heroism of Queen Esther going up against the Persian king and his adviser Haman to explain why he was going “all in to help the Ukrainian people survive…” he said. “And I’m very concerned about what’s going on in Iran with the king of Persia now, and if we embody that government… it’s going to put the world in jeopardy.”