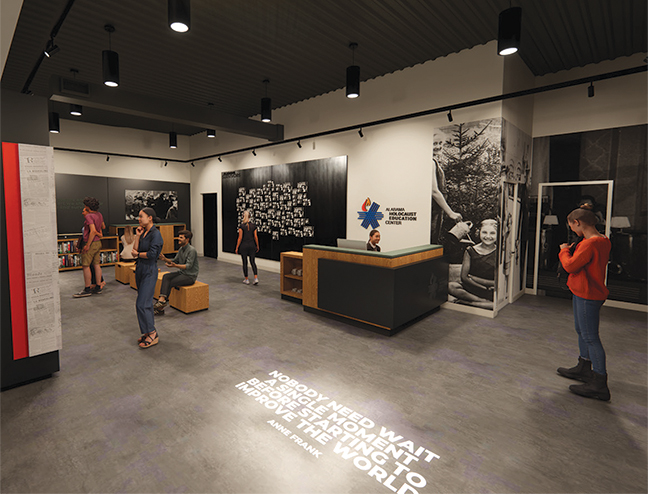 A lot of changes will be celebrated when the annual L’Chaim event takes place on Sept. 18, benefiting Holocaust education in Alabama.

A new executive director will be in place for the September event, and the agency will also be celebrating its new center, located at Temple Emanu-El in the space that formerly housed the Discovery School, which closed in 2020.

The fundraising event, which will be at 3 p.m. at Birmingham’s Red Mountain Theatre, will also honor those who had prominent roles in the 2018 Violins of Hope programs in Birmingham. Niv Ashkenazi, violinist and former student of Itzhak Perlman, will perform on one of the violins from the Violins of Hope collection.

At first, Amnon Weinstein, a third-generation violin maker in Israel, was reluctant to work on violins that had survived the Holocaust. In 1996, as he started training his son, Avshalom, he agreed to restore one that had been played in the concentration camps. The Weinsteins formed Violins of Hope, and have restored dozens of violins with the idea that they would be used in performances, giving voice to their owners, many of whom did not survive.

The agency’s new 8,300-square-foot facility will be an education center, to hold programs and welcome guests and groups. It is double the size of the previous facility, at the former Bayer Properties office, and slightly smaller than the pre-expansion size of the Museum of the Southern Jewish Experience in New Orleans.

The lobby will hold an exhibit on the robust Jewish life in Europe before the Holocaust, using images, video and archival material from the 173 survivors who are known to have settled in Alabama after the Holocaust.

There will be two permanent exhibits. “Darkness Into Life” tells the stories of 20 Alabamians who survived the Holocaust, through the modern-day photographs of Becky Seitel and paintings by Mitzi Levin portraying their pre-war stories. A traveling version has been exhibited in venues throughout the state.

There will also be installations honoring servicemen and women from Alabama who lost their lives in World War II, and one honoring Alabamians who liberated the concentration camps.

The research library holds over 3,000 volumes, making it the largest Holocaust library in the Southeast. A climate-controlled archive holds about 8,000 artifacts and documents.

David Silverstein, vice president of development for AHEC, said the new center will allow the agency “to be more accessible to the public as it furthers its mission of educating the people of Alabama about the impact of extremism and the lived experience of antisemitism.”

The agency holds several teacher workshops throughout the year, and over 1,600 teachers already have been trained in Holocaust education. Over 120 teachers have received scholarships to study at seminars in Washington and Europe.

Over 400 groups of students have heard from local Holocaust survivors or second-generation survivors. A community-wide Holocaust commemoration is also held every April, and a “Holocaust in Film” series is screened.

In 2018, they spearheaded four days of Violins of Hope concerts and educational events. A central event was a concert at Sixteenth Street Baptist Church, where four girls were killed in a Klan bombing in 1963. The concert featured the premiere of Panion’s composition, “Dreams of Hope for Solo Violin and Orchestra,” and was filmed for an award-winning documentary, “Dreams of Hope,” that aired on public television stations nationally.

Downs spearheaded the effort to bring the violins to Birmingham, visiting the Weinsteins in Israel. Donnellan was co-coordinator for the Birmingham events, having seen a “60 Minutes” piece on the violins. She was determined to see the violins come to Birmingham, and discovered that Downs was also working on it.

A two-time Grammy winner, Panion is a composer, arranger, conductor and a music professor at the University of Alabama at Birmingham. His most recent work was as artistic director for the opening and closing ceremonies of the World Games in Birmingham, for which he composed “Hope of Alabama.”

Ashkenazi has made several Carnegie Hall and Kennedy Center appearances, and has performed in Europe, the Middle East, and across North America. His debut album, “Niv Ashkenazi: Violins of Hope,” the first solo album recorded on one of the Violins of Hope, was released in March 2020 on Albany Records, and he is the only musician with a long-term loan of one of the violins. His album has received international critical acclaim and was named one of the 10 best classical recordings of 2020 by the Chicago Tribune.

A Juilliard graduate, he serves on the professional advisory board of Inclusion Matters by Shane’s Inspiration, a global nonprofit organization dedicated to building inclusive playgrounds, and formerly served on the board of the Los Angeles Youth Orchestra.

The violin Ashkenazi will play is one of the Klezmer violins from the collection. It was one of the first that Amnon Weinstein restored, and little is known about its background. It has an inlay Star of David on the back.