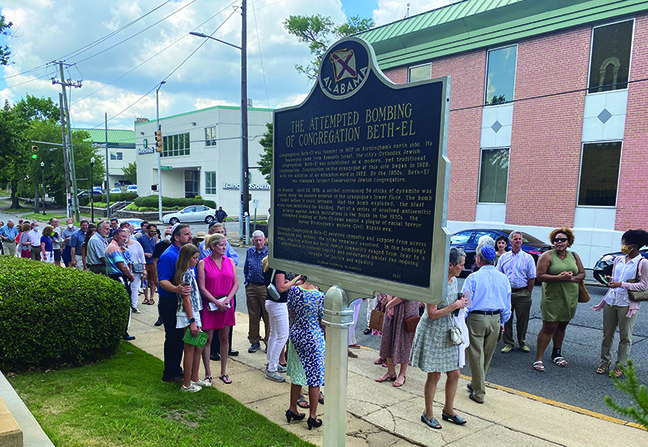 On July 17, Temple Beth-El in Birmingham dedicated its new historical marker, detailing the attempted bombing in 1958.

With the historical marker dedication kicking off the Beth-El Civil Rights Experience last month, the next program will be a sneak peek at the civil rights exhibit.

Tzofim La’atid, Looking to the Future, will be on Aug. 25 from 5:30 to 8 p.m. There will be docent-led tours of the exhibit and a chance to provide feedback on the project. Drinks and appetizers will be served, and there will be a chance to meet with community partners and donors.

The Experience seeks to show Birmingham’s civil rights experience through the stories of what was happening in the Jewish community at the time, and to build connections for ongoing acts of tikkun olam. Several groups on civil rights tours of the region have already been scheduled to visit.

The evening will include a rare exhibit of photos taken by noted photographer Spider Martin during the civil rights movement, especially Selma in 1965. This is the first time the photos have been loaned outside a museum setting.

At the preview, there will be remarks from Dejuana Thompson, president of the Birmingham Civil Rights Institute; J. Mason Davis of Dentons Sirote, the first Black lawyer hired by a major Alabama law firm; and T.K. Thorne, the first Jewish police officer and captain at the Birmingham Police, and author of “Behind the Magic Curtain,” which details the “unsung white allies” of the movement, many of whom were in the local Jewish community.

The project also announced a challenge grant from Dentons Sirote, with $1 being contributed for every $2 raised, up to $5,000, in honor of community leader Karl Friedman and his work behind the scenes. He was a member of the firm from 1952 until his death in 2018.

Admission to the Aug. 25 event is free, but donations toward the development of the center are welcomed.