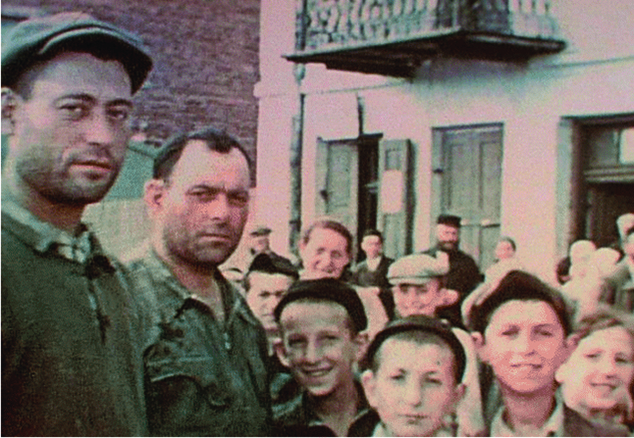 In just three minutes, many years of lifetime and history can be told.

“Three Minutes — A Lengthening,” a feature-length documentary inspired by three minutes of 16-millimeter color film footage shot in a small Polish village by an émigré from America, makes its Alabama debut at the 24th annual Sidewalk Film Festival, Aug. 22 to 28 in downtown Birmingham.

Bianca Stigter directs “Three Minutes,” which was co-produced by her husband and Academy Award-winning director Steve McQueen. The Amsterdam native said she was working primarily as a film critic when she saw the film online and information about the Glenn Kurtz book “Three Minutes in Poland: Discovering a Lost World in a 1938 Family Film.”

“When the three minutes were over, I was just so moved,” said Stigter. “I wanted to find a way to keep this past in the present longer; to extend these three minutes.”

Kurtz’ grandfather, David, shot the footage. David Kurtz was born in the town but emigrated to the U.S. with his family in 1888. He made the video in 1938 while on a trip to Europe, to learn more about his birth town of Nasielsk.

Less than a year later, the Nazis invaded and the 3,000 Jewish residents in the town of 7,000 were sent to the Treblinka concentration camp. Only 100 survived. The book and the movie go in-depth to piece together the stories of the residents.

“I am a historian by trade, so this fascinated me,” said Stigter, who wrote the book “Atlas of an Occupied City 1940-45” about her native Amsterdam during World War II. The book was published in 2005 and its second edition came out in 2019.

She is not Jewish, but her grandfather served with the resistance and was sent to Dachau toward the end of the war, and was later freed. “The original footage was a microscope, but so much time has passed since then. The challenge was finding out more those included in the film.”

Stigter worked with Kurtz and assembled a filmmaking team. They first came out with a 20-minute short film, but Stigter knew there were more stories to tell and set out to make a full-length documentary feature. “There were about 100 people included in the footage. Anything that we could find was a gift,” she said.

The feature documentary came out in 2021. It includes interviews with Kurtz and Maurice Chandler, a survivor who appears in the film as a boy. Award-winning actress Helena Bonham Carter, who is of Jewish descent, narrates “Three Minutes – A Lengthening.”

Stigter said they were invited to show the film at a film festival in Poland. “We had a special viewing in Nasielsk and everyone got together for a dedication of the memorial at the Jewish cemetery in the town, organized by Glenn Kurtz and other descendants of Jewish inhabitants in the town.”

“The windows from the old synagogue that was destroyed in the war, were also incorporated in the memorial,” she said. “It was a very moving, special and important day.”

The film will show on Aug. 28 at 10 a.m. at the Birmingham Museum of Art, one of seven Sidewalk Film Festival venues.

Some other titles of interest in the 24th annual festival include:

“The Automat” by Jewish director Lisa Hurwitz, at the Alabama School of Fine Arts on Aug. 27 at 10 a.m. The Automat tells the 100-year story of the iconic restaurant chain Horn & Hardart, the inspiration for Starbucks, where generations of Americans ate and drank coffee together at communal tables. From the perspective of former customers, including entertainer Mel Brooks, Starbucks founder Howard Schultz, Supreme Court Justice Ruth Bader Ginsburg, Secretary of State Colin Powell, the Horns, the Hardarts, and key employees — the film shows a business climb to its peak success and then grapple with fast food in a forever-changed America.

“Surviving the Holocaust: A Conversation with Dr. Robert May” is a 27-minute film that will be screened in a block of Alabama Documentary Shorts, Aug. 27 at 10 a.m. at the Alabama Theatre. Alabama director Kim Garner offers an intimate look at the life of one of Birmingham’s only remaining Holocaust survivors, detailing his feelings of loss, hope and triumph over tragedy.

The second block of Alabama Documentary Shorts, Aug. 28 at noon at the Birmingham Museum of Art, includes “Smile Little Ladybug,” a 17-minute film by Laura Asherman. Herbert Kohn and his parents escaped Nazi Germany when he was 12, eventually winding up in the Jim Crow South, where he felt he had escaped one persecution to find himself in the middle of another.

While he eventually moved from Alabama to Atlanta and devoted himself to repairing the world, his daughter and granddaughter were unintentionally inspired to bring joy to the world in another way, through becoming clowns. His granddaughter, Andrea Zoppo, is known as Miss Ladybug.

“Love Without Parole” will be the concluding short film in the Alabama Spotlight Night shorts package, Aug. 22 at 7 p.m. at the Sidewalk Cinema. The documentary is produced by Greg Womble and Elaine Witt.

The film is about Michael, who is sentenced to life without parole under Alabama’s three strikes law, despite his crimes being non-violent. While in prison, he falls in love with a woman who visits him, and they get married despite his being behind bars. After serving for 36 years he is miraculously freed — but will the long-cooled romance be reignited outside of prison?

Witt said it is “an extraordinary love story wrapped in an Alabama fiasco, the continued imprisonment of older inmates who were convicted decades ago, under the state’s old habitual offender law, for crimes in which no one was physically hurt.”

Just before “Love Without Parole” is “Preacher’s Pulpits and the Letter from a Birmingham Jail,” about Martin Luther King’s 1963 masterpiece. The short film, directed by Anissa Latham-Brown, explores why King wrote the letter and who the intended audience was. Rabbi Milton Grafman of Temple Emanu-El was one of the eight clergy members who issued a statement that King was responding to with the letter.

“Refuge” is about Chris Buckley of LaFayette, Ga., a veteran of Iraq and Afghanistan who was a leader in the Ku Klux Klan, and started hating Muslims on Sept. 11, 2001. A text message he receives from a Muslim refugee in Clarkston, Ga., a town that is a magnet for refugees from around the world, forces him to confront his views, along with an intervention from a group specializing in helping those with extremist views, following concern from his wife.

“Refuge” was directed and produced by Erin Levin Berhnardt and Din Blankenship of Atlanta. They were inspired by the 2017 “Unite the Right” rally in Charlottesville, Va., especially as they are alumni of the University of Virginia. Bernhardt is a sixth-generation member of Ahavath Achim in Atlanta and recently told the Atlanta Jewish Times that “anything that counters hate should be considered Jewish.” The film will be screened on Aug. 28 at 5:20 p.m. at the Birmingham Museum of Art.