Several Jewish authors at Miss. Book Festival — and one famous author with history of antisemitism allegations 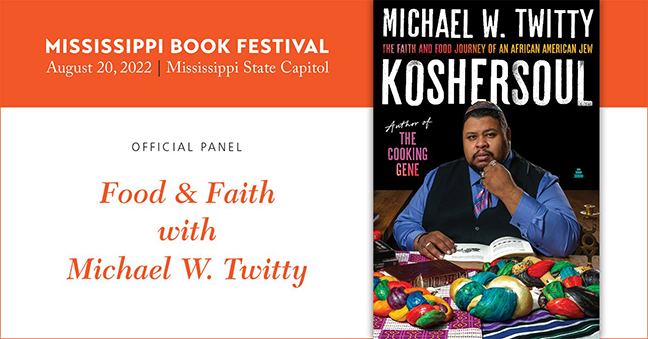 Several Jewish authors will have appearances at the Mississippi Book Festival on Aug. 20, along with a noted author who has been disinvited from several festivals because of her promotion of antisemitic conspiracy theories.

The free festival, which had been on hiatus since 2019 due to Covid, will be at the Mississippi State Capitol in Jackson and the nearby Galloway Church.  About 170 authors will be in attendance.

Michael Twitty, will do a “Food and Faith” presentation at 10:45 a.m. in State Capitol 113. The James Beard Award-winning author recently published “Koshersoul: The Faith and Food Journey of an African American Jew.”

In 2018, Twitty published “The Cooking Gene: A Journey Through African-American Culinary History in the Old South.” He did a culinary and cultural exploration of the South, from Maryland to Louisiana, in 2012, having meaningful encounters with the Jewish communities in Birmingham and New Orleans.

Marcie Cohen Ferris will be on a Taste of the South panel at 4 p.m. in State Capitol 113. She is author of “Matzoh Ball Gumbo: Culinary Tales of the Jewish South” and the more recent “The Edible South: The Power of Food and the Making of an American Region.”

The panel will be led by John T. Edge, and also features Vishwesh Bhatt, author of “I Am from Here: Stories and Recipes from a Southern Chef,” and “The Big Book of King Cake” author Matt Haines.

Also at 4 p.m., Stuart Rockoff will moderate “Reflecting Mississippi,” a panel that explores Mississippi’s history through a variety of genres, in celebration of the Mississippi Humanities Council’s 50th anniversary.

Rockoff is the executive director of the Mississippi Humanities Council, having previously been the historian at the Goldring/Woldenberg Institute of Southern Jewish Life.

The panelists are W. Ralph Eubanks, author of “A Place Like Mississippi: A Journey Through a Real and Imagined Literary Landscape;” Kiese Laymon, author of “Long Division;”  “Biloxi” author Mary Miller; and Aimee Nezhukumatathil, author of “World of Wonders: In Praise of Fireflies, Whale Sharks, and Other Astonishments.”

The panel will be in the Galloway sanctuary.

Andrew Feiler, author of “A Better Life for Their Children: Julius Rosenwald, Booker T. Washington, and the 4,978 Schools That Changed America,” will be on a panel on “Photography: A Picture of History” at 1:30 p.m. in State Capitol 201H. The panel will explore the intricacies of race relations in the American South before and after the Civil Rights era.

A fifth-generation Georgian, Feiler is a member of the Savannah Jewish community, and his works have been displayed in venues including the National Civil Rights Museum at the Lorraine Motel in Memphis, National Center for Civil and Human Rights in Atlanta, and International Civil Rights Center and Museum in Greensboro, N.C.

The panel will be moderated by W. Ralph Eubanks, author of “A Place Like Mississippi: A Journey Through a Real and Imagined Literary Landscape.” Also on the panel are William Ferris, author of “I AM A MAN: Photographs of the Civil Rights Movement 1960-1970,” and Berkley Hudson, author of “O. N. Pruitt’s Possum Town: Photographing Trouble and Resilience in the American South.”

As part of the festival, Alice Walker will speak on the 40th anniversary of the release of “The Color Purple,” her Pulitzer-winning novel.

Despite being a major literary figure, Walker has recently been disinvited from numerous events because of her promotion of antisemitic conspiracy theories, specifically those of conspiracy theorist David Icke.

In April she was disinvited from the Bay Area Book Festival in San Francisco. The festival board stated that “Ms. Walker’s promotion of the conspiracy theories and disinformation of David Icke is dangerous… as Ms. Walker has toured for her new book, there has been increasing public outcry against events and interviews that fail to address her ongoing endorsement of Icke.”

The Bay Area festival categorically denied that there was any pressure from pro-Israel groups, as anti-Israel groups like to assert when Walker is disinvited. “There were never any Zionist groups, nor threats of protests. Nor was there any Israel lobby that contacted the Festival at any point, nor capitulation by us to any outside pressure.”

The Mississippi appearance was announced two weeks after the cancellation in San Francisco.

In May, the San Diego Community College District also cancelled an investiture ceremony where she was to be the featured speaker.

Walker says Icke is neither antisemitic nor anti-Jewish, though Icke claims there is a secret cabal of alien lizard people running the world, and most of them are Jewish. He also claims that if the Holocaust did actually happen, it was funded by the Rothschilds.

Earlier this summer, Mississippi Book Festival Executive Director Ellen Daniels said that the festival organizers were aware of Walker’s past comments, but invited her for the celebration of “The Color Purple,” and because Walker used to live in Mississippi and was in the first interracial marriage in the state.

In 2013, Abraham Foxman, who was the head of the Anti-Defamation League at the time, said Walker was “unabashedly infected with anti-Semitism” and showed a “depth of her hatred of Jews and Israel to a degree that we have not witnessed before” in her book “The Cushion in the Road.” In the book, she compares Israelis to Nazis, and denigrates Judaism and Jews, the ADL said.

A 2017 poem, “It Is Our (Frightful) Duty to Study the Talmud,” uses fabricated quotes that neo-Nazis and white supremacists claim are from the Talmud to claim that Jews condone pedophilia and murdering non-Jews. The poem describes “an ancient history of oppression” of “Goyim, sub-humans, animals, the Palestinians of Gaza” executed “With impunity, and without conscience,/By a Chosen people.”

In May she reposted on her official blog a commentary piece entitled “Nurit Peled-Elhanan: killing, evicting, murdering – Jewish routine.” It describes the killing of Nader Rayan, a 16-year-old Palestinian by Israeli border police and claims it to be part of a pattern of Israel killing Palestinian children. The piece does not mention that the police were trying to arrest a wanted criminal when two terrorists on a scooter sped by and started shooting at them. The police returned fire, killing the two — one of whom was the “child.”

The piece also mentions al-Jazeera journalist Sherin Abu Aqla, who was killed in a crossfire in Jenin as Israel tried to uproot a terror cell that had been responsible for numerous attacks in Israel. Though it is still inconclusive which side fired the shot that hit Abu Aqla, the CodePink piece Walker reposted claimed “a sniper from the occupation soldiers targeted her on the head in the area not covered by the helmet, specifically under the ear.”

Walker is part of a vocal group that tries to pressure any performer who announces plans to perform in Israel, refused to allow “The Color Purple” to be issued in a Hebrew edition, and participated in a 2011 flotilla to try and break Israel’s blockade preventing arms shipments into Gaza.

“In Conversation with Alice Walker” will be at noon at the Galloway Sanctuary, with Jackson native and Carnegie Medalist Kiese Laymon moderating the discussion. They will be in the signing tent at 1:45 p.m.