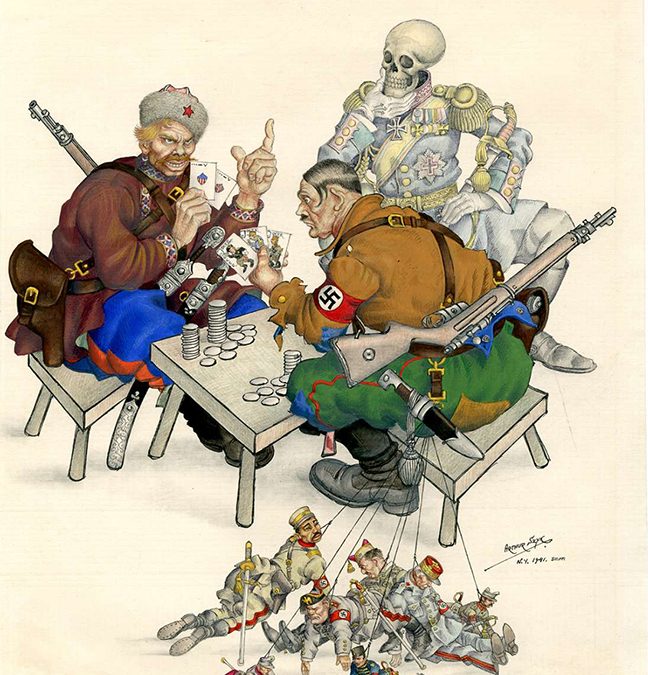 The Silent Partner, by Arthur Szyk

The National World War II Museum in New Orleans is hosting an exhibit by illustrator and political cartoonist Arthur Szyk, “In Real Times. Arthur Szyk: Art and Human Rights,” from Sept. 1 to May 7.

An opening reception will be held on Sept. 1, in person and virtually. There will be a reception at 5:30 p.m. and a program at 6:30 p.m. Reservations are encouraged but not required.

Born into a middle-class Jewish family in turn-of-the-century Poland, Szyk led a life shaped by two world wars and dominated by the collapse of democracies and rise of totalitarianism in Europe. Szyk was a refugee who settled in the United States in 1940.

As an artist, he became renowned for his caricatures and political cartoons, throughout which he displayed a broad concern for human rights. The artist fearlessly ridiculed dictators, exposed Nazi genocide, supported the Polish resistance, and criticized the Ku Klux Klan and civil rights violations in America. Many of his works appeared on the covers of America’s most popular magazines during World War II.

Throughout his artwork, he paired his commentary on human rights issues with motifs drawn from religion, history, politics, and culture.

“In Real Times: is curated by Francesco Spagnolo of the Magnes Collection of Jewish Art and Life at the University of California, Berkeley. The acquisition of the Taube Family Arthur Szyk Collection in 2017 and research for this exhibition were made possible by a gift from Taube Philanthropies.

The exhibit will showcase more than 50 of his original works from the collection’s 450 pieces, focusing on humanitarian issues that were being dealt with at the time and still resonate today.

Visitors will be able to see the entire Szyk collection digitally, and have the opportunity to use an interactive work station to repurpose elements of his pieces and create new cartoons, which will then be published online.

The exhibit will be on display in the Joe W. and Dorothy D. Brown Foundation Special Exhibit Gallery in Louisiana Memorial Pavilion. The special exhibition is presented in New Orleans by Taube Philanthropies, with additional support from George Marcus and the Isermann Foundation.