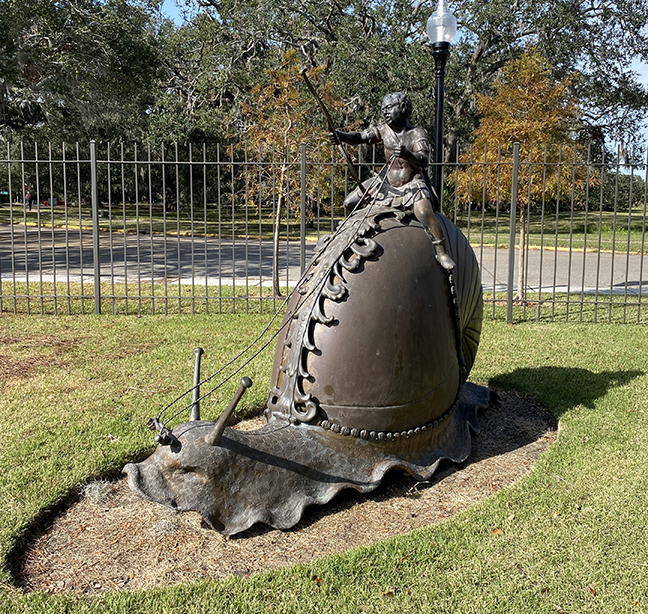 In the Sculpture Garden (SJL file)

Susan Taylor, the director of the New Orleans Museum of Art, said benefactor Sydney Besthoff III envisioned the museum’s sculpture garden as “a joyful place.” That will certainly be the case on Sept. 23, as the museum holds its LOVE in the Garden event in his memory.

The Sydney and Walda Besthoff Sculpture Garden was recently named the best sculpture park in the country by USA Today’s 10Best. Besthoff died in February at the age of 94, and “We are honored to dedicate this year’s LOVE in the Garden to the memory of Sydney Besthoff, who created this incredible space with his beloved wife Walda,” Taylor said.

The sculpture garden, with over 90 works of 20th and 21st century outdoor art, opened in November 2003, and underwent a 6.5 acre expansion in 2019. The garden is free and open seven days a week.

Besthoff first became a NOMA board member in 1992, then started talking about the idea that became the sculpture garden.

“With Walda, Sydney’s goal was to create a new way for NOMA to expand and broaden its audience, while creating ways for New Orleanians to experience art in a relaxed and informal setting. It is a demonstration of this desire to share their passion that they wanted the Garden to be free and open to the people of the city of New Orleans,” Taylor said in a tribute to Besthoff last February.

She noted that on Feb. 11, two weeks before he died, he supervised the installation of another new sculpture in the garden.

Besthoff was founder of the Contemporary Arts Center in 1976. The center’s Besthoff Building was the former headquarters of the K&B drugstore chain. When he relocated the headquarters, he invited artists into the building, to break creative boundaries.

In 1980, he was the first recipient of the City of New Orleans Arts Award, and was recognized with a Louisiana Humanities Lifetime Achievement Award in 1997. In 2004, Sydney received NOMA’s Isaac Delgado Award, and the museum also established the Sydney Besthoff Legacy Award in 2017, honoring “outstanding contributions and distinguished philanthropy in the arts.”

In a 2018 series celebrating New Orleans’ 300th anniversary, the Times-Picayune declared him one of the 300 people “who have made New Orleans, New Orleans.”

Established in 1992, The Bucktown All-Stars are a brass-driven New Orleans party band specializing in 1960s classic R&B and soul, ’70s funk and New Orleans jams. They are a multi-year winner of Gambit’s Readers Poll in “Best Band That Doesn’t Fit Any Of These Categories” and 10-time winner of the prestigious Offbeat Magazine Best of the Beat Awards.

Proceeds from the rain-or-shine event support the museum’s mission “to unite, inspire, and engage diverse communities through the arts.”