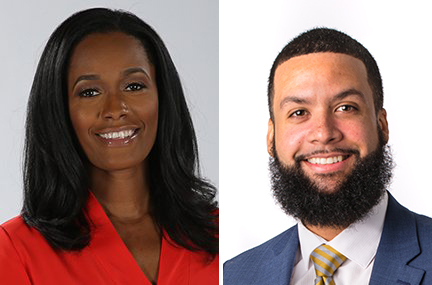 Swin Cash and Will Snowden

The South Central region of the Anti-Defamation League is holding its second “annual” In Concert Against Hate, Sept. 29 at the New Orleans Jazz Market. After the first concert, there was a two-year hiatus due to Covid.

The event will recognize Swin Cash and Will Snowden as community leaders in the fight against hate, extremism and intolerance.

Cash is vice president of basketball operations and team development for the New Orleans Pelicans.

After playing for two national championship teams at the University of Connecticut, and being named most outstanding player at the 2002 Final Four, Cash was drafted second overall by the Detroit Shock.

She played over 500 games in the WNBA over 15 years, winning three championships and being named an All-Star four times. She also was on two gold medal winning teams in the Olympics, and was named one of the WNBA’s 20 best and most influential players.

Cash is the founder of Cash Building Blocks, an urban development company that renovates and offers affordable homes for low income families; the Cash for Kids Charity, whose mission is to motivate, educate and elevate kids through physical fitness, nutrition, education, cultural trips, and sports camps. She has also worked extensively with the NBA as a global ambassador for social responsibility and NBA Cares.

Snowden is the Louisiana director of the Vera Institute of Justice. Based in Brooklyn, the institute brings researchers, organizers and government officials together to find evidence-based solutions to end mass incarceration, and takes successful initiatives nationwide. Snowden works on partnerships in the region to improve criminal justice systems in the South.

Before joining Vera, he was a public defender for five years, and launched The Juror Project, to improve the diversity of jury panels and change people’s perspective of jury duty.

Snowden leads workshops around the nation, showing how implicit bias, racial anxiety and stereotypes influence outcomes in the legal system.