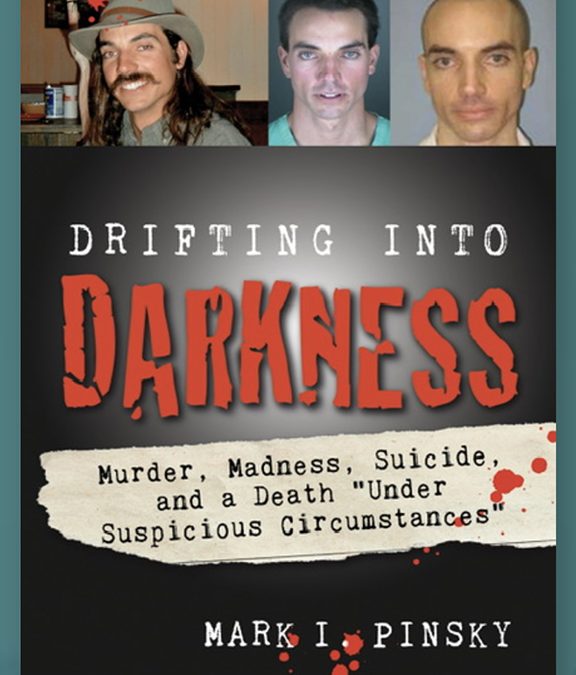 He’s merged his fascination with brutal crimes with his considerable investigative journalism skills, infusing it all with a lifelong love for Judaism and Israel as he’s lived a life of adventure and achievement.

Pinsky’s latest book, “Drifting Into Darkness: Murder, Madness, Suicide and a Death ‘Under Suspicious Circumstances’,” is anchored in Montgomery. The focus is the brutal 2004 murders of Montgomery socialites Charlotte and Brent Springford, Sr. by their troubled son, Brent Jr.

Even though you know who did it from the outset, Pinsky, with his penchant for probing and his narrative talents, turns it more into a “whodunnit.” He delves into a dark and unresolved theory of the case: That the younger Springford was manipulated into murdering his parents by a mysterious older woman who controlled his actions and mind.

It’s a book worth reading. Not only is it gripping, Pinsky tells the story through exhaustive research, a page-turning cadence and a free-of-fluff style. “Drifting into Darkness” will likely stay in your mind for weeks after finishing it, especially because so much of the story takes place in Montgomery.

The book was published by Montgomery-based NewSouth Books. The publishing company, featured recently in Southern Jewish Life because of its Jewish offerings, was recently acquired by the University of Georgia Press.

While “Drifting into Darkness” is Pinsky’s latest book, it is not his first about an unresolved Southern murder. “Met Her on the Mountain: The Murder of Nancy Morgan,” released in 2013 and recently reissued in an updated paperback by the University Press of Kentucky, tells the story of a young VISTA worker in western North Carolina, who was brutally murdered in 1970 while Pinsky was a student journalist at Duke University.

Pinsky takes you deep into North Carolina mountain culture as he recounts and further investigates the events surrounding the young woman’s death.

So, what’s Jewish about all this?

Pinsky, who now lives in Durham, N.C., grew up in a strong Jewish home in Pennsauken Township, N.J., where he was a United Synagogue Youth leader and regional president. He volunteered in Israel in the days following the 1967 Six Day War, an experience he has written about in Moment magazine. In his latest book, he mentions attending synagogue in South Dakota as his research journey takes him there, and to Colorado and Wyoming.

The journalist/author sees his Judaism as being integral to his true-crime writing. He wrote about this linkage for Religion News Service, saying “my tangled tales of murders, madness and suicide have usually served the spirit behind the verse from Deuteronomy that fronts my latest book: ‘Justice, justice you shall pursue’.”

“Also, with the best true-crime reporting, one key faith component is rachmones, a Yiddish term for compassion,” he added.

For him, his Jewish faith remains a time-tested compass as he goes about his work. “On the road, as I research a murder, often alone, my Judaism grounds me — no matter how horrific the mayhem. When these reporting trips stretch over weekends, I try to find synagogues to attend Shabbat services, often in small congregations from Montgomery to Rapid City, S.D.”

Pinsky’s journalism career has been diverse. He has written for the New York Times, Wall Street Journal and USA Today, and was a crime reporter for the Los Angeles Times and religion writer for the Orlando Sentinel. His stint in Orlando led him to write another book, “A Jew Among the Evangelicals: A Guide for the Perplexed.”

Promoting the book in 2006, the publishing company wrote it “takes the curious reader on a tour of the fascinating world of Sun Belt evangelicalism. Pinsky, religion reporter for the Orlando Sentinel, uses his unique position as a Jew covering evangelical Christianity to help non-evangelicals understand the hopes, fears, and motivations of this growing subculture and breaks down some of the stereotypes of evangelicalism.”

Pinsky, now 75, speaks from his Durham home with obvious pride in what he’s achieved. Yet there is a hunger for the next big story, and a healthy restlessness about life that is uniquely Jewish. These ingredients keep him going while, in his words, he “keeps one eye on the clock.”

But even though time moves forward, the ticking of the clock never changes. Much like Mark Pinsky himself — a passionate Jew and prolific journalist, who remains a very interesting guy.