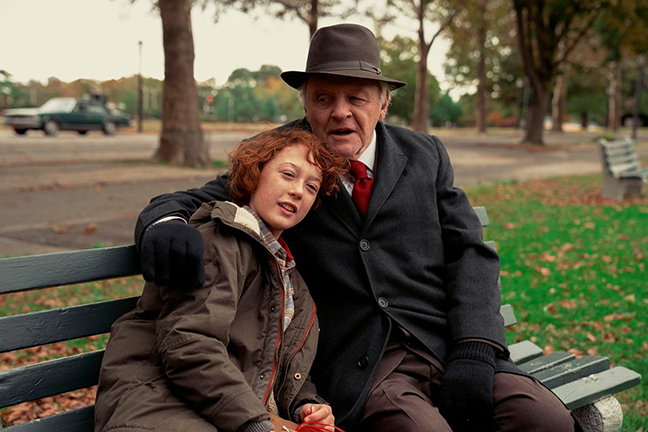 Birmingham’s Jewish Film Week, hosted by the Sidewalk Film Center and Cinema, will spotlight a diverse range of features, documentaries and short films ranging from a “Fiddler on the Roof” viewing and discussion to a new release based on the childhood of filmmaker James Gray, “Armageddon Time.”

Dan Seigel, who is programming the Jewish Film Week for Sidewalk, said “Jewish Film Week will include a diverse array of films offering glimpses into Jewish identity, life in Israel, the Jewish LGBTQ-plus communities and several new films,” said Seigel. Sidewalk hosted its first Jewish Film Week/Festival in 2019 and this year “promises to build upon that.”

On Nov. 16 at 6 p.m., as part of the monthly Adaptation Club, Sidewalk will host a viewing and discussion of the classic “Fiddler on the Roof,” along with Sholom Aleichem’s books that inspired it – “Tevye the Dairyman” and “The Railroad Stories.”

The other films and shorts will screen in that theatre, with encore screenings on Nov. 19. In the other theatre throughout the week, Sidewalk will screen “Armageddon Time.”

Gray wrote, directed and produced the film, inspired by his childhood upbringing in Queens, N.Y., during the 1980s.

After American Jewish student Paul Graff is caught smoking cannabis at his high school, he is sent to a private school run by Donald Trump’s sister, Maryanne, where Paul faces prejudice. “Armageddon Time” was released on Oct. 28 after gaining acclaim at the 2022 Cannes Film Festival this past May. It stars Anne Hathaway as Paul’s mother and Anthony Hopkins as Paul’s grandfather.

“Armageddon Time” will screen numerous times between Nov. 11 and Dec. 1.

Seigel, a family therapist and musician, has been a long-time Sidewalk supporter and was asked to program this year’s event. His father, Lester, was the long-time music director at Temple Emanu-El, and is the Joseph Hugh Thomas Professor of Music at Birmingham-Southern College.

“I did a lot of research on the Jewish Film Festivals websites and contacted distributers such as Menemsha to get some recommendations,” he said.

Seigel added that there will be individual film passes sold and some ticket packages allowing access to multiple films.

The festival begins with four films on Nov. 13, starting at 1:45 p.m. with “A Starry Sky Above the Roman Ghetto.” Sofia finds a photo in a neglected suitcase and is determined to learn more about it. She finds the child’s name, and that she was separated from her parents during a Gestapo raid, then rescued by a nun. She endeavors to honor her memory by doing an original play about her with classmates and friends, but must overcome objections by concerned parents.

At 4 p.m., “iMordecai” stars Judd Hirsch as Mordecai Samels, a Polish Holocaust survivor in Miami. The film, which also serves as a “love letter” to Miami, is about ow he gets an iPhone when his old flip phone breaks, and lessons he takes on how to use the iPhone open up a new world of exploration and new experiences.

“Plan A” at 6:15 p.m. is based on a true story of what would have been the biggest revenge operation in history. Max survived the Holocaust but lost the rest of his family. Looking for only revenge, he joins a Jewish Brigade of soldiers under British command, who find and execute Nazis “off the record.” With no confidence in justice being served at the Nuremberg Trials, he joins a group that plans to infiltrate German water companies as undercover engineers, with the goal of poisoning the drinking water in five major German cities, to kill 6 million Germans in retaliation for the Holocaust.

“Kiss Me Kosher” at 8:45 p.m. is a romantic comedy about two families from very different cultural and religious backgrounds planning a same-sex wedding in Israel, and how they try to overcome their differences — except for one grandmother of the Israeli partner who insists Germans and Jews should not marry. That same grandmother, though, is secretly seeing a Palestinian lover.

On Nov. 14, “Farewell Mr. Haffman” will screen at 7:30 p.m. Based on a multi Moliere Award-winning play, the French film is set in occupied Paris in 1941. When a decree is issued for Jewish residents to come forward and identify themselves, jeweler Joseph Haffman is concerned and arranges for his family to flee, and lets his employee take over the store for the interim. But when his escape plan falls through, he is forced to seek his assistant’s protection, moving in with his assistant and assistant’s wife, leading to a Faustian bargain.

The film is paired with the short film “The Mohel,” about a young couple that flies a mohel in to a small community, and when the mohel is disapproving of the new mother, the father is forced to confront questions of cultural identity versus religious commitment.

On Nov. 15, there will be a screening of the classic “Fiddler on the Roof,” part of the new Adaptation Club at Sidewalk. Club members read the novelizations that classic films were adapted from, then discuss them and view the film to see how the stories changed or were redone for the screen.

“Ahed’s Knee,” on Nov. 16 at 9 p.m., confronts the impending death of a filmmaker’s mother and the death of freedom. It follows an egotistical Israeli filmmaker known only as Y, who travels to a remote desert town for a screening of his newest film, inspired from a Palestinian teen girl who became famous for slapping an Israeli soldier. He finds out that there will be limits on what he can say during the question and answer session, sending him into a spiral of rage.

On Nov. 17 at 9:15 p.m., “Concerned Citizen” is a satirical take on how privilege can reveal inner prejudice. It centers around Ben, a liberal gay man who plants a tree on his street in a slum area of Tel Aviv, but that seemingly innocuous act sets off a series of events that leads to the violent arrest of an Eritrean immigrant, challenging Ben’s vision of himself and society.

“Karaoke,” on Nov. 18 at 4:45 p.m., is an Israeli film about a married middle class couple in their 60s that is drawn to their new neighbor, a charismatic bachelor who holds karaoke nights in his apartment, who reawakens their sleepy relationship.

“Cinema Sabaya” will screen at 2 and 9 p.m. on Nov. 19. Nine women, Arab and Jewish, take part in a video workshop and begin to document their lives. They share the raw footage and get to know each other better while challenging their own views.

At 6:30 p.m., the classic film “The Chosen,” based on the novel by Chaim Potok, will be screened. It details the friendship the develops between Danny, a Hasidic Jew and Reuven, an observant Zionist, after a baseball mishap, and the tension between their fathers.