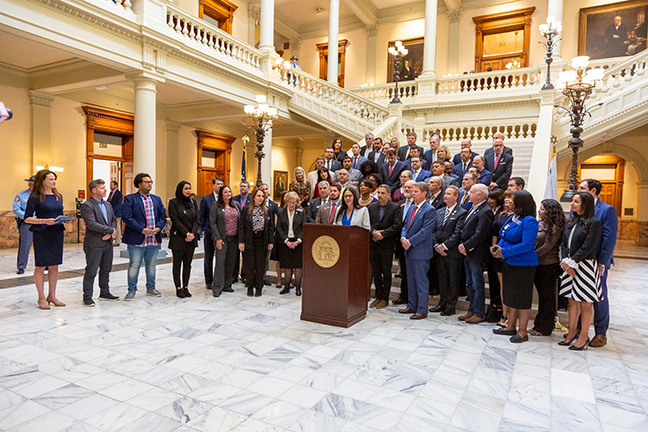 In two years, the Abraham Accords have reshaped the Middle East, as several Arab states established relations with Israel and pursued normalization.

A panel at the Birmingham Civil Rights Institute, with representatives from Abraham Accords nations, will discuss how the peace and normalization agreements are reshaping the region.

Civil Rights Institute President DeJuana Thompson will moderate a panel with members of Sharaka, a non-governmental organization that showcases people-to-people diplomacy. They will discuss how civil society and individuals can bring people together through the process of peace and collaboration.

Dan Fefferman is Sharaka’s director of communications and global affairs. He is an Israeli-American author and speaker. “We see ourselves as self-appointed ambassadors for the Abraham Accords and the new peace taking shape across the region,” he said.

Sharaka, which means “partnership” in Arabic, started operations right after the Abraham Accords were signed on the White House lawn as a joint citizen diplomacy initiative of Emiratis, Bahrainis, and Israelis. They plan to share their reflections and experiences as first-time Arab-Muslim visitors to Israel and first-time Israeli-Jewish visitors to the Arab world.

Fatema Al Harbi is Sharaka’s director of Gulf affairs. She was among the first Bahraini people to visit Israel after the Abraham Accords were signed. An author who writes novels about Bahraini women, Al Harbi holds an MBA in international management and is a record-holder in track and field.

Syrian-Lebanese peace activist Rawan Osman is writing a book about her perception of Jews and Israel before and after leaving the Middle East.

Ibtissame Azzaoui was elected to the Moroccan Parliament in 2016, one of the youngest to serve. She was on the foreign affairs committee and the joint committee between the Moroccan and European Parliaments. She is now a city councilor in Rabat, working on a doctoral thesis on Moroccan parliamentary diplomacy in Africa.

She said, ““As a Moroccan-Muslim woman, I live in a society that always promoted tolerance, coexistence values and interfaith respect. I want to share this model and help building strong people-to-people relations across the region. I see with optimism this new era of relations in the Middle East that can lead to a new constructive, prosperous, and sustainable common future leading to a lasting peace.”

Ahmed Khuzaie is Sharaka’s director of U.S. affairs. A Bahraini national, he has experience in politics, international communications and consulting.

“I’m proud of being part of the Sharaka team that’s reshaping the Middle East through this people-to-people approach,” Khuzaie said. “After intensively engaging with Israelis over the last two years, I believe it’s the best path a civilian can take to help this region prosper.”

The event is being coordinated by the Consulate General of Israel to the Southeast.

The Accords were between Israel and Bahrain, Morocco, the United Arab Emirates and Sudan.