Former New Orleans Saint Junior Galette has added his name to the long list of people speaking out about the Kyrie Irving antisemitism controversy — but on Irving’s side, and adding his own antisemitic tweets to the mix.

Galette’s Twitter account header describes him as a “Former Saints Team Captain that is Blackballed from the NFL for calling out Pay Discrimination Community Revolution In Progress.”

Galette attended Temple and Stillman, and was an undrafted free agent signee by the Saints in 2010. He became a starting outside linebacker and was a defensive team captain in 2014. He was released in July 2015, signing with Washington. After missing two seasons to Achilles tears, he played all 16 games in 2017 and was third in the NFL in quarterback pressure rate.

After that season, there was a salary dispute and he has not played since. He recently filed a $300 million lawsuit against the NFL and several teams for blackballing him in 2018 after he spoke out in support of Colin Kaepernick, saying “I’m not playing for no slave deals I’ll die before I play for more slave deals.”

He accuses Washington owner Dan Snyder, who is Jewish, of keeping him from signing with the Los Angeles Rams and keeping him out of the league.

He has lashed out at Black players who denounced Irving, saying they “are all Free Masons that took a Oath (sic). This is all part of their rituals etc they are legit TROLLING YOU GUYS they’ve been BOUGHT OUT!!!”

The tweet was accompanied by a photo of Shaquille O’Neal wearing a Freemason ring. Charles Barkley and Kenny Smith also spoke out against Irving, drawing Galette’s ire.

He referred to the NBA at TNT as the “Plantation Squad,” calling O’Neal “Samb@ism,” Smith as “House Negro” and Barkley as “KING C—N.” 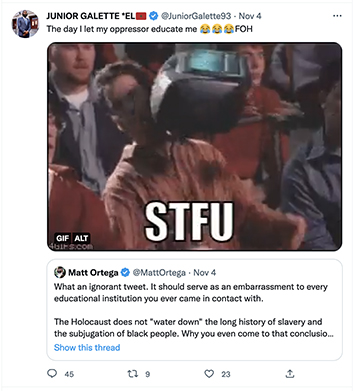 He also retweeted a video that purports to show a Chasidic man purposely vomiting on a Black woman. The original post said “Black folks are treated like trash by white Jews irl, here’s a Jewish man projectile vomiting and hitting a black woman on the head with a bottle. And some negrows on here really defending these ppl.”

David Lange of Israellycool points out that the video first surfaced in 2019 to drum up hate against Jews and Israel. The video was filmed at a bar in Belgium, and people who live near the bar as well as members of the Jewish community in Oostende say that Jews don’t frequent that bar, certainly not an ultra-Orthodox Jew who does not have sidelocks. Lange said he does not have proof that the video was staged, but strongly suspects it is.

Besides, he added, even if it were real, why should the “reprehensible” conduct of one Jew in an isolated incident be used to stoke anti-Jewish hate?

After Ye’s posts, Galette said “These Fake Jews Got More Nuts Than The Real Jews nowadays.”

He also retweeted a Blaze TV post by Jason Whitlock saying that social media is programming Americans to “view Farrakhan, (Alex) Jones and Trump as existential threats. The same thing is being done to Kanye.”

In a tweet that has been removed for violating Twitter rules, Galette said “Holocaust never happened all fake news to water down what they did to our ancestors #facts.”

He responded to a tweet about how “the Holocaust does not ‘water down’ the long history of slavery and the subjugation of black people” by saying “The day I let my oppressor educate me” with a video of a boom box hitting a white man in the face.

Another response that included four pictures from the Holocaust was greeted with “Lmaooo where r these made up people? Let me guess u got moon landing vids too.”