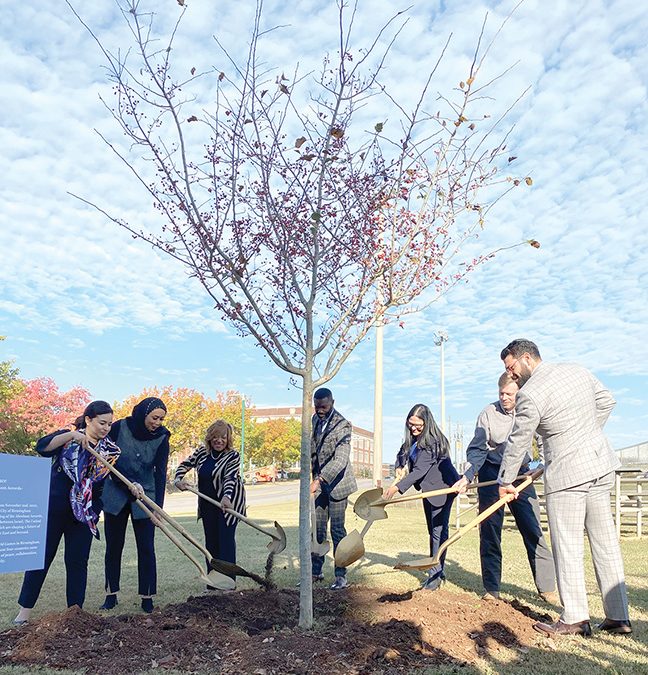 During the World Games in July, Birmingham officials were joined by dignitaries from the Abraham Accords nations — Israel, Morocco, United Arab Emirates and Bahrain — to dedicate a site at Marconi Park where a “Peace Tree” would be planted.

After all, actually planting a tree in Birmingham in July isn’t the best move — for the tree.

At a Nov. 2 followup event, Aaron Braunstein, director of public affairs for the Consulate General of Israel to the Southeast in Atlanta, said in July “we decided to plant a sign instead, and thank you for going along with that.”

The actual tree, a Winter King Hawthorne, was planted on Nov. 2, in celebration of the second anniversary of the historic peace agreements between Israel and UAE, Morocco and Bahrain.

Anat Sultan-Dadon, Israel’s consul general in Atlanta, said it is fitting to recognize the second anniversary in a city that is “the cradle of the civil rights movement.”

Mayor Randall Woodfin said Birmingham has a dual legacy of activism and peace, and that peace is achieved “when each resident stands on equal ground as neighbors… it’s the kind of lasting peace we celebrate today.”

Thanking the city departments that made the ceremony possible, Woodfin said “this tree will stand as a strong and mighty monument of peace, freedom and tranquility that we all hold dear.”

Sultan-Dadon said Israel’s Declaration of Independence includes a statement that “our hand is outstretched in peace to all our neighbors,” and two years ago “courageous leaders came together, choosing peace, prosperity and bridge building over divisiveness and conflict.”

That decision strengthens moderates in the region as they battle threats from extremist regimes like Iran, she said.

The Abraham Accords have led to “countless collaborations and partnerships,” direct flights between the countries, and more than half a million Israeli tourists and businesspeople visiting Bahrain and UAE. “The Accords have created a host of exciting opportunities.”

Also participating in the ceremony were representatives of Sharaka, an international interfaith organization dedicated to promoting Middle East peace through people-to-people initiatives. Sharaka is the Arabic word for partnership.

Bahrain based Fatema Alharbi, Sharaka’s Gulf Affairs director, said she was proud of the king of Bahrain for “taking this brave step.”

The long jump record holder for Bahrain said “we can see before us a golden opportunity for peace, security and prosperity for our region. Let us waste no time in seizing it.”

She noted that just as a tree needs sunshine, water and healthy soil, “so too does peace in the Middle East need support from friends around the world.”

A logo for the event has a golden dove symbolizing peace over a thumbprint made from the flags of the four Abraham Accords nations.