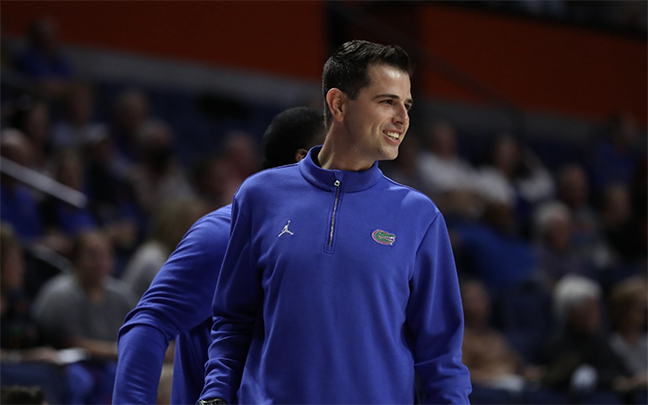 Golden became the Gators’ head man after three seasons at the University of San Francisco, guiding the Dons last year to their first NCAA tournament bid since 1998.

Pearl coached Golden (and Steven Pearl) on the 2009 U.S. gold medal-winning World Maccabiah Games team, and from 2014 to 2016, Golden served as an assistant (director of operations) to Pearl at Auburn.

“Bruce is a mentor and a friend,” said Golden. “I owe so much to him for all he did for me. He has really helped in my acclimation process to the SEC.

“Bruce is one of the hardest workers I’ve ever met, and his work ethic is something that I emulate. It will be a unique experience to compete against him,” he said.

Golden takes over for Mike White, who was hired by the University of Georgia.

Growing up in Phoenix, Golden’s family was involved in the Jewish community and basketball was always a big part of his life.

“We lived five minutes down the road from the Phoenix JCC. I remember going there every day after school and my dad played in the adult leagues there,” he said.

Golden led Sunnyslope High School to the state championship in 2002, and the guard would earn a scholarship to St. Mary’s University in California.

He played 2004 to 2008 for the Gaels, who made the NCAA tournament twice while Golden was there. In 2008, Maccabi Haifa signed him to a contract and he played there through 2010.

“Playing in Israel and winning the gold medal at the Maccabiah Games in 2009 were some of the most memorable, defining moments of my career,” said Golden, who has dual U.S.-Israel citizenship. “My teammates (on Haifa) were very welcoming. I felt a strong connection to Israel. That experience helped me to become the man I am today.”

San Francisco was Golden’s first head coaching opportunity, and he wants to elevate the Gators to renewed prominence.

Of course, Pearl’s Tigers might have something to say about that. Auburn won the SEC last year but lost in the second round of the NCAA tournament to the Miami Hurricanes.

They lost first-round draft picks Jabari Smith and Walker Kessler, but Pearl said the team’s trip to Israel this past summer brought the team closer together.

“From an experience standpoint, they said it was one of the best trips of their lives,” he said. “It gave them a chance to be closer to God and to learn more about their faiths.”

“As a coach I’m always looking for ways to find common ground. I look at religion as something that should bind us together,” added Pearl.

From a basketball standpoint, the trip “helped the players to grow by being able to play against top professionals,” including NBA player Deni Avdija on the Israeli National Team.

Pearl said that experience will be important in replacing Smith and Kessler. “I’ve never lost two first rounders in all of my coaching career,” he said.

“But we have guys who will step it up, and having (junior guard) Wendell Green Jr. come back to lead the team will help to elevate our younger players. Our strength this year is that we have really good depth.” Also returning is guard Lior Berman, who grew up in Birmingham’s Jewish community and played high school basketball at Mountain Brook.

In addition to being there for all of his players, Pearl said he wants to always be there for Jewish students at Auburn. He regularly hosts “Bagels with Bruce” and Pearl and his wife plan to once again host a Chanukah party at their house.

When asked his thoughts on Golden, Pearl was quick to praise his former player and assistant coach.

“I think it is just an outstanding hire,” he said. “As a coach he did a lot to get things started here and to lay an incredible foundation. He’s a young, talented coach who really connects with players. And Todd is very public with his Jewish faith.”

Gray also has experience playing in Israel. Gray is a Boston native who played at Division III Emerson, serving as captain for two years. After graduation, he secured Israeli citizenship and signed with Hapoel Eilat of Israel’s Premier League in 2019, then returned to Boston when the season was cancelled in 2020 due to Covid. In late summer, he signed with the Israeli National League’s Ironi Kiryat Ata, working out with other Israeli pros in Atlanta before heading back overseas, where he had to practice apart from his Israeli teammates for two weeks due to quarantine restrictions. He played for Migdal HaEmek in 2021.

Gray “brings high energy, a bright, young mind and recent professional playing experience to our program,” Pearl said. “He has a tireless work ethic and became an outstanding shooter in college.”

Gray said he has followed Pearl and Auburn for years, and “I could not think of a better way to transition into this next chapter of my career. I am very excited for the opportunity to learn from the best of the best in college basketball.”

He is pursuing a master’s of education and a minor in sports management at Auburn.