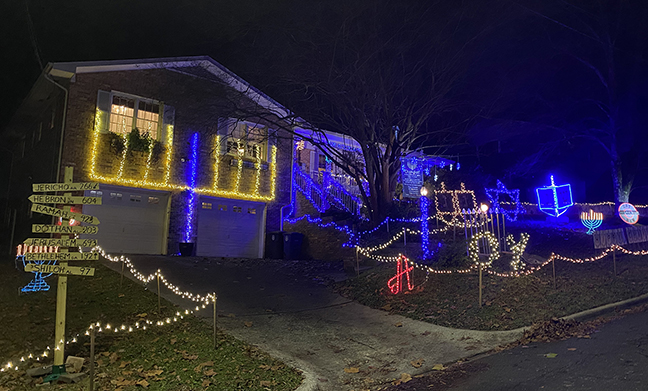 It’s time to show up and show out.

Chanukah is a time when there are numerous high-profile, public events. This year, it’s time to embrace those events and show up.

That may seem to go against the grain. There are numerous articles about people in the Jewish community doing the exact opposite — hiding any outward signs of being Jewish.

In New York, the epidemic of assaults against those who are visibly Jewish continues. Antisemitic incidents continue to climb nationally. Some people are posting on social media that they plan to not have their Chanukah menorahs in their windows, as a precaution.

A growing number of Jewish communities have a full-time professional to coordinate security policy for all local institutions.

On campus, Jewish students often hide their identity lest they incur the wrath of “anti-Zionist not antisemitic” professors, and be subject to more critical grading pens. Or student groups having nothing to do with the Middle East that nevertheless seek to exclude anyone who might be supportive of Israel.

Even some Hillels are being asked not to produce T-shirts with the university name in Hebrew, because the mere presence of Hebrew on a shirt is interpreted as an aggressive act endangering the safety of Palestinian students, and wearing such a shirt is an invitation to being accosted.

Just before we went to press, there was a study that showed that around 30 percent of human resources professionals were less likely to continue the hiring process if they know an applicant is Jewish — and younger professionals were twice as likely as older ones to discriminate against Jews.

This is the 21st century?

Rather than give in, it is time to take pride in who we are, and show up to exercise it.

By the time this issue arrives in homes, not only will there be a menorah in our window, there will be a 3,000-light, 14-foot by 20-foot menorah on the front of the house.

We’ve been doing this for about 15 years — adding to the display each year, including a seven-foot spinning dreidel, a banner of Vulcan holding a menorah, a total of about 8,000 lights. Basically, what Clark Griswold would do if he were Jewish.

The display is unusual, but is based on the philosophy that if Chanukah is the festival of light, why did we abandon the field and let the Christians have all the fun?

For a decade, we have been a stop on the Wacky Tacky Holiday Lights Tour, which benefits Fresh Air Family, providing scholarships to its science-based Gross Out Camp for kids, including those escaping violence, or who are suicide orphans.

Each of the four nights, eight to 10 buses come by and see the Chanukah House, and I give a quick shpiel about Chanukah while passing out chocolate gelt.

I’ll explain what a sufganiyah is, because of the Krispy Kreme-style “Hot Sufganiyot Now” sign. I’ll joke about needing some guy on the roof just like other houses in the area have, then point to our Fiddler by the chimney.

Chanukah was the first war for religious freedom, I will tell them, fighting for our right to be ourselves and not emulate the larger culture. After a pause, I’ll admit I’m saying that with thousands of lights in our yard.

I’ll even mention that without the events of Chanukah in 165 BCE, certain events in Bethlehem that they are celebrating could not have happened.

In 10 years, there has been just one time when I sensed someone was heading down a bad path with his question, and deflected it.

Now, I’m not naive. There was an arson attempt outside my congregation recently (though all indications are it was the random act of a firebug and not antisemitic). Last year, someone stole the tall Chanukah from outside Chabad of Huntsville.

There’s always a chance that something could happen. But we can’t let the haters win.

What did Rabbi Cohen do after the theft in Huntsville? He ordered several more, to place in several locations around the area. There were expressions of concern and support from the Christian community in Huntsville.

After the arson at Beth-El, the state director for Christians United for Israel activated her prayer chains in a show of support.

When something negative happens, we’ve seen that support from our neighbors routinely.

The Chanukah display is visible in the community; when my press credentials were being checked at one of the World Games venues this summer, the guy said “you’re the Chanukah house!” That happens very frequently.

It is incredible to walk on one of the Wacky Tacky buses and be greeted by a group of third grade girls, decked out in their Christmas outfits and reindeer antler headbands, singing the Dreidel song to me.

Or getting on a bus to the chants of “Chanukah! Chanukah!” or a group of inebriated twentysomethings singing Adam Sandler’s Chanukah song (didn’t have the heart to tell them I’m not a fan of Sandler).

We’ve had people say the Chanukah House is their favorite stop on the tour (it must be the chocolate), we’ve had couples talk about it being part of their first date.

Thousands have seen the Chanukah House on Wacky Tacky, and maybe a couple dozen have been Jewish. Countless more have stumbled on it or heard about it from a friend. That’s thousands of people having a great experience in a Jewish context, and many of them may not really know anyone Jewish.

Not to mention being told by people in the Jewish community that their kids like seeing themselves represented.

Chanukah is about bringing light to the world. We can’t do that behind drawn curtains.

At a time when there is so much misunderstanding and misperception, being visible and accessible is how we build understanding. Standing up and showing our pride is how we gain respect.

Turn the so-called December Dilemma into a December opportunity. And you don’t even need to become the power company’s best friend to do so.

Show up and show out, and after Chanukah, find ways to keep doing it.