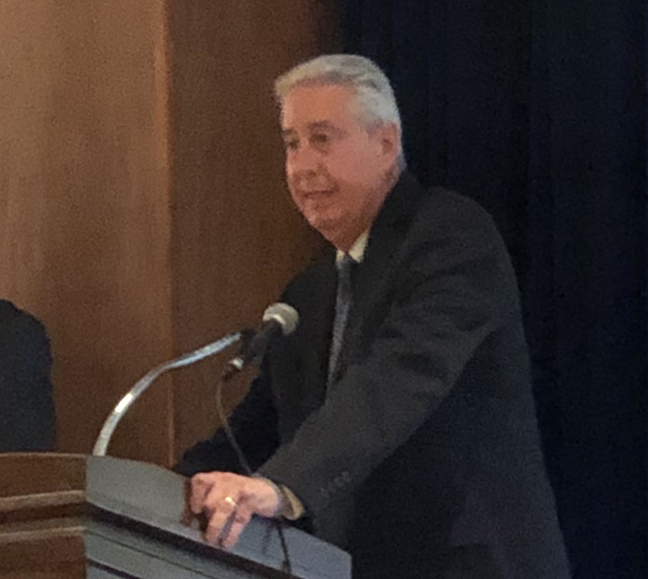 Arnie Fielkow says his retirement as CEO of the Jewish Federation of Greater New Orleans is “bittersweet” as “I have truly grown to love the work I do and the people I am privileged to work with.

“At the same time,” he said, “my retirement allows me one last potential venture which I am excited about and looking forward to in 2023.”

He will be succeeded by Robert French, executive director of Jewish El Paso and The Jewish Community Foundation of El Paso, at the end of the year.

Fielkow returned to New Orleans in the summer of 2017 to take the helm at the Federation, an opportunity that “brought me back to the city that I love.”

Fielkow originally moved to the city in 2000 “because I was able to get an opportunity with the Saints, and we immediately fell in love with the city of New Orleans.”

He was executive vice president of the Saints, parting ways with the team after Katrina. He was then elected to the city council in 2006 and re-elected in 2010. In 2011, he became executive director of the National Basketball Retired Players Association in Chicago.

“We missed New Orleans from the moment we left,” Fielkow said. “We were always keeping an eye on how I could get back to the community.”

The Federation opening “gave me the chance to get back here and raise our daughters here.”

He was always aware that Federation was a significant organization in the community, but felt it wasn’t well known outside the Jewish community. After Katrina, “I looked at the Federation and the incredible work it was doing bringing people back to the community.”

Nevertheless, the greater New Orleans community didn’t see the Federation “at the same level as other faith-based organizations,” like Catholic Charities, United Way and so forth.

When he met with the search committee, he said he wanted “to broaden our role so the rest of the New Orleans community knows the good work of the Jewish Federation.”

The Federation also works closely with elected officials on issues affecting Israel, Judaism or Jewish values. That came to a test early in his tenure in January 2018, as the New Orleans City Council passed what seemed to be an innocuous human rights resolution that anti-Israel groups, who had presented the resolution, immediately publicized as a Boycott, Divestment and Sanctions bill against Israel, though that was not in the resolution’s language. They celebrated what they called the first BDS bill by a major city in the United States, confounding the council members who had no idea that was the motivation.

Within two weeks, “we were able to get that pro-BDS resolution rescinded by a unanimous decision at the city council,” Fielkow said. The episode then led to Governor John Bel Edwards issuing an order against BDS, followed by the Legislature passing an anti-BDS law.

Another priority was broadening Federation’s appeal within the Jewish community. Two years before Katrina, Fielkow was on the Federation board, and he remembered that in the community of 10,000, while there was a high synagogue affiliation rate, just a small segment of the community engaged with Federation.

He figured “we have to give a reason why a member of the Jewish community would want to make a donation to the Annual Campaign, other than guilt.”

Over the last few years, the Federation has done a lot more programming, from Israel to politics, from a range of perspectives, and expanded relations and joint programming with the African-American, Latino and LGBTQ communities.

“When we see what is happening in the world today with antisemitism, hate… it is more important than ever that we have alliances with other minority groups, so we can advocate against hate in all its forms.”

The community itself has been growing, with a current estimate of 12,000.

Another priority has been expanding partnerships with the corporate community, rather than relying entirely on the Annual Campaign. The Federation has gone from about $50,000 per year to $400,000 per year in corporate sponsorships, and all programs are self-funded.

He acknowledged that the Annual Campaign has been flat for many years, partly because of the economy, but also because “people want to give in a different way,” meaning more direct giving and less of an umbrella gift approach.

Nationally, people give to annual campaigns, endowments and supplemental “passion giving” for particular purposes. That last type is becoming a major component of giving, and is reflected in the two Centers the Federation began recently — the Goldring Center for Jewish-Multicultural Affairs and the Leventhal Center for Interfaith Families, where a donor had a passion for seeing a particular need met.

Fielkow said the two Centers, with “incredible lay leadership and two superior executive directors,” are “a source of tremendous pride” and were established by people who “wanted Federation to grow in those areas.”

The Goldring Center is already producing deeper ties with other communities in New Orleans, Fielkow said, and in a decade, “we will look back at the Leventhal Center and say that is one the most important things Federation ever did.”

Intermarriage can be seen as “a major problem or an opportunity,” Fielkow said. “I believe in the latter,” as “we can’t turn a blind eye to it.” The Center helps interfaith couples learn what is available in the Jewish world, locally and nationally, to help them make their own decisions.

Multicultural partnerships include a speaker series with Historically Black Colleges and Universities, and a regular “Cross-Cultural Conversations” show on WBOK-AM.

This past summer’s trade mission to Israel will pay huge dividends, both in the business and research ties that are developing from the trip, and from the relationships forged between the Federation and institutions throughout the state.

While Fielkow’s six years included the challenge of a two-year pandemic and the major disruption of Hurricane Ida last year, he also had a serious health issue to overcome one year into his position. He was diagnosed with a rare, non-curable disease, and after “a brilliant diagnosis” he spent a few months out of town, being treated.

“That was very hard, to try and do the job from afar and battle the medical challenges,” he said. Nevertheless, now “it’s under control, my health is good” and he feels as he did when he returned to New Orleans.

Now, Ukraine is both a professional and personal priority for Fielkow, as the Federation movement nationally raises emergency funds for the Jewish community there, and Fielkow works to assist the sisters of Yana and Svetlana, their two adopted daughters from Ukraine.

When the war ends, “rebuilding the Jewish community of Ukraine will be a significant challenge,” taking “a lot of time, a lot of sweat equity and a lot of money,” and he hopes to be part of that effort.

Covid “was a challenge for everybody,” but one silver lining was being able to virtually connect with “many more people that we may not have reached.” But now, “it’s awfully important to get back to in-person work.”

The Federation was able to help the community in many ways during Covid, including thousands of free kosher meals to health care workers who would otherwise be too tired to think of meals when getting off their long shifts. Fielkow said that initiative “was tremendously appreciated,” and also helped the three kosher caterers in town during an otherwise slow period.

On a personal level, his Federation role “brought me back to my Jewish roots.” He explained, “I grew up in a small community in Wisconsin” with 100 Jewish families. He had observant grandparents, was active as a youth with five years at Camp Ramah and family observance of holidays.

“During my professional career in sports, I lost some of that because of travel, the day to day work,” he said. His position at Federation “brought me back to observance, synagogue life, my pro-Israel stances and so much more.” Partly due to the pandemic, he said he has not missed a Friday night in two and a half years. He also reads the weekly portion each week, and hopes to continue that.

While Fielkow is retiring from the Federation, there is an acknowledgement that there are still chapters to come.

While working in the sports world is “fun,” he felt his six years on the City Council was “gratifying,” especially because it was right after Katrina and “we were literally rebuilding a city.”

Saying that politics “gets in your blood,” he is “exploring a potential run for office in 2023,” and will decide after the first of the year. An open seat will be available in the Legislature, and he has his eye on running for it. If elected, he would be the only Jewish member of the body.

Fielkow said leading the Federation “has been an absolute joy… and I am going to miss it.”

He said the Federation staff is “the best of the best, and I could not have been given a better group of people.”

The Federation is “a historic organization that does incredibly good work in the Jewish community, and hopefully under my tenure, much more to the community at large.”

He hopes that French “will not only put his own stamp on Federation, but sustain the growth from the last five-plus years.”