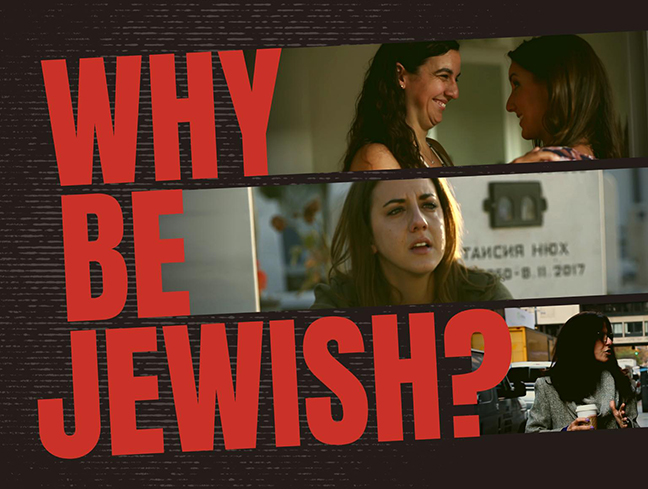 For Israeli-born Becky Tahel, that question about faith and identity came as an evolution from an exploration of why someone Jewish should marry Jewish, after her younger sister and only sibling married a non-Jew.

Her search for answers led to “American Birthright,” a documentary that will be screened at Sidewalk Cinema in Birmingham on Jan. 11, in a program co-sponsored by the Birmingham Jewish Federation, You Belong in Birmingham, Temple Emanu-El and Temple Beth-El. Tahel will lead a discussion after the screening.

Tahel moved to the United States at age 6 and her family was culturally Jewish, not religious. Still, the reaction in her family to her sister’s choice was very divided, especially for her grandmother, who survived the Holocaust.

Of course, these days, intermarriage is a huge part of the Jewish landscape. But even with it being widespread, that does not make it inconsequential.

An actor and writer, she had sought spirituality, but outside a Jewish framework, and had dated non-Jews. So she was surprised by her gut reaction to her sister’s engagement — “why do I feel weird?”

That put her on a quest for answers, so she set out to make a movie about her sister’s journey and intermarriage. But “the filmmaking journey is really a self exploration,” and it wound up being a way to “figure myself out and ask a different question.”

She started interviewing experts about intermarriage, bringing a film crew, admitting that she wasn’t particularly articulate at the outset. “I didn’t know how to start asking the question,” but took her mother’s advice of walking in the direction of a question. She eventually saw how little she actually knew about Judaism itself, or who she wanted to be.

Her travels brought her back to Israel, where she immersed herself in classical Judaism, and the question moved from marriage to the much broader question of why one should be Jewish.

Though the film is centered on Judaism, she said “it’s not a uniquely Jewish query at all,” because if a non-Jew is watching, “they ask their own questions within their wisdom traditions” in searching for their meaning.

The film won Best Documentary at the Seattle Jewish Film Festival, among other accolades. It was whittled down from 150 hours of footage she gathered over seven years on a tiny budget, and she went through 10 versions before the final release in early 2021.

Ultimately, the film becomes her story as she becomes a different person, finding greater meaning in Judaism and a much deeper connection to her observant grandparents, who were already deceased. She now calls herself Torah-observant, and is married to a religious filmmaker and musician.

Her parents are the post-Holocaust generation, concerned with Jewish survival, “but that doesn’t quench the thirst of Generation Z, the millennials” who are looking for “the deeper why.” She said those who speak about seeking spirituality need to have a specificity to really arrive at that point, and they need to “start from where we came, explore why we were born into this tradition” and learn much more about Jewish traditions and spirituality, so one can make an informed, conscious choice. “That was never really given to me” when she was growing up.

Originally, she figured the film would speak most to young adults, but she has been surprised by the reaction from other ages. She has done programs with high school students, going in wondering “what do 9th graders care about this?” Instead, “they were so engaged and open about their own existential crises.”

The film has also reached “a lot of people on the later half of their journey, people who are already religious but feel robotic and needed a resurgence of their own spirituality.”

She is looking forward to visiting Birmingham, having come from much larger communities where Judaism is all around and “you take it for granted.” Tahel said that is why Judaism is referred to as “a practice,” that one needs to actively do it.

She also said everyone needs to find their own “brand” of Judaism. “If we are all a letter in the Torah, we all need to find our letter and our uniqueness,” she said. “Maybe the Judaism you know is not the Judaism you should know.”

Tickets to the screening are $10 and include unlimited popcorn. Doors open at 6 p.m. for socializing at the Sidewalk bar. The film will be at 6:30 p.m., and after the conversation, there will be time for a l’chaim and further mingling.