Many U.S. rabbis vow to keep far-right Knesset members from speaking at their congregations 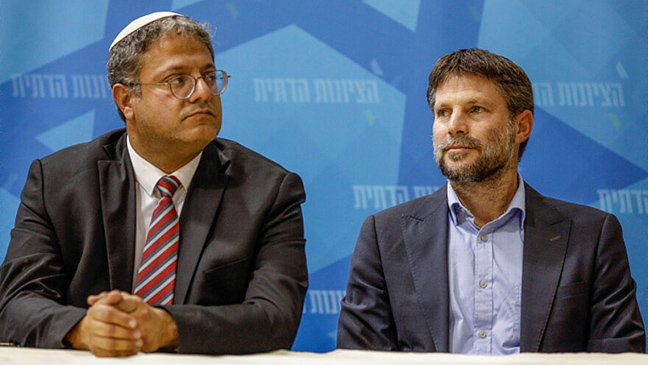 From JNS and staff reports

More than 330 U.S. rabbis have signed a “call to action” pledging to bar members of Israel’s Religious Zionism Party from speaking at their synagogues.

The signatories, Reform, Conservative and Reconstructionist rabbis, said they would “not invite any members of the RZP bloc — including but not limited to Otzma Yehudit leaders — to speak at our congregations and organizations.”

The letter said the policies of Religious Zionism Party leader Bezalel Smotrich and Otzma Yehudit Party Chairman Itamar Ben Gvir, who ran together in the Nov. 1 election, are “anathema to the tenets of democracy” and “will cause irreparable harm to the Israel-Jewish Diaspora relationship.”

The joint Knesset run resulted in the election of 14 members of Knesset: Religious Zionism (7), Otzma Yehudit (6) and Noam (1).

Rabbi David Teutsch, professor emeritus and senior consultant at the Reconstructionist movement’s Center for Jewish Ethics in Pennsylvania, and John Rosove, rabbi emeritus of Temple Israel in Los Angeles and a former national chairman of the Association of Reform Zionists of America (ARZA), organized the letter.

Teutsch told JNS that while he’s been active in Israel-related issues for 55 years, including with J Street since its founding and as a supporter of organizations such as Rabbis for Human Rights, he has never written a public protest letter before. He said he did so because “the stated policies of the incoming government represent a sharp turn away from the values stated in Israel’s Declaration of Independence.”

He said he wasn’t surprised by the outpouring of support for the letter, which started with 331 rabbinic signatures but “now there are many more.

“The incoming Israeli government shares views and partnership with evangelical Christians and disdains the views of the vast majority of Jews outside Israel in a way that is alienating American Jews in unprecedented ways,” Teutsch said.

The signatories said they would work to prevent Religious Zionism members from speaking at other fora in their communities as well.

Teutsch told JNS he would do so by “communicating with the presidents, executive directors and rabbis of Jewish organizations with which I am affiliated and encouraging others to do the same.”

As of press time, the only signatories from the SJL coverage area are Rabbi Harry Danziger of Memphis, who just retired as visiting rabbi of Adath Israel in Cleveland, Miss., and Rabbi Cantor Raina Siroty of Gemiluth Chassodim in Alexandria, La. Rabbi Jonathan Miller, who retired from Birmingham’s Temple Emanu-El in 2017 and now lives in Bethesda, Md., also signed.

No Orthodox rabbis have signed the letter.

The letter cites concerns that the RZP will propose changing the Law of Return to refuse to recognize non-Orthodox converts and their descendants, annex the territories and expel Arabs who oppose the government.

The letter also expresses concern that LGBTQ rights and the rights of women will be eroded. However, on Dec. 29 Likud’s Amir Ohana was elected Israel’s first openly gay speaker of the Knesset, and will be responsible for setting the legislative agenda.