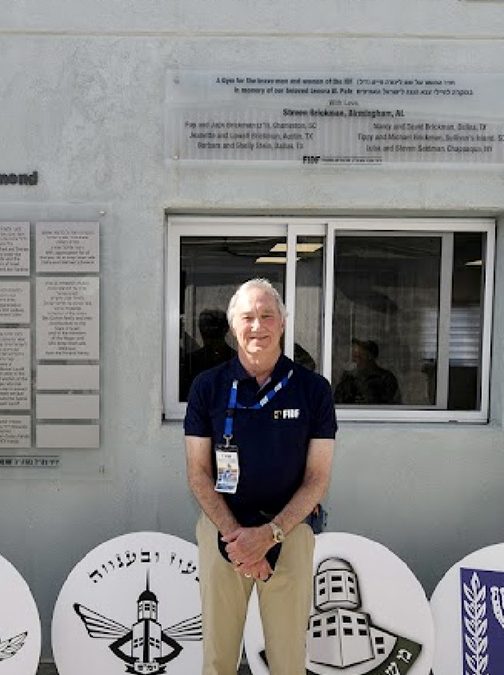 When Birmingham’s Lenora Pate died in June 2021, the Jewish community lost a friend.

A devout Christian, Lenora was married to Steven Brickman, a longtime Jewish community volunteer leader. There was hardly a cause or congregation in Birmingham that wasn’t enriched by Lenora’s passion, sense of purpose and love for the Jewish people.

She made a similar impact through her wide-ranging activities and leadership roles in Birmingham’s legal, political, civic and Christian communities.

Now, a year and a half after Lenora’s passing, she’s also made an impact in Israel.

Knowing that she was deeply passionate about the Jewish state and the Jewish people, Brickman, his extended family and others have raised funds to dedicate a much-needed fitness center for soldiers serving in the Israel Defense Forces.

“Lenora loved Israel,” said her husband. “She understood Jewish history, believed deeply in the importance of the Jewish state, felt that as a Christian that it was her duty to bless the Jewish people, and recognized that a strong Israel benefits America. This is why my family and I chose to honor her this way.”

The project that now bears Lenora’s name is a fitness facility for the Magav Unit in Ktziot Base in the Negev. This is a new facility, and Brickman and his family made the lead gift to the project.

The organization Friends of the Israel Defense Forces, which worked with Brickman and his family to facilitate the donation, sees the new facility as crucial not only to the physical and mental health of soldiers but also to Israel’s security.

In a statement, FIDF highlighted its importance: “The soldiers of Magav Israel Border Police’s Undercover Counter-Terrorism Unit constantly lay their lives on the line protecting the Jewish Homeland and are in need of a fitness facility where they can train in preparation for their duties. The soldiers of the unit must always be in peak physical condition to successfully carry out the dangerous and integral missions they are tasked with. They are responsible for actively preventing terrorist attacks and often go undercover in enemy territory for months on end, risking their lives to ensure the safety of the citizens of Israel.”

Brickman traveled to Israel in November to speak at the dedication of the facility. “The soldiers told me how important being physically fit is, and how integral having such a center is for their physical and mental health and how important that was and will be to them. When I heard that from them and their commanders, I had tears in my eyes.” Before the new facility was built, soldiers did their exercises outside under a makeshift canopy to shield them from the sun.

The appeal for funds for this project was led by Alon Ben Gurion, grandson of David Ben Gurion, Israel’s legendary first prime minister. “I am so excited to be one of the committee members in the FIDF’s efforts to raise funds for this Magav recreational project in the Negev. Not only is the project essential to the soldiers of the Magav unit, but it helps to fulfill the dreams of my grandfather, David Ben Gurion, in building out and securing the Negev as a critical part of Israel’s growth,” he wrote.

One of those involved with fundraising for the project was Joel Gardner, a long-time friend of Brickman, who reached out to him knowing how committed Lenora and the Brickman family were to Israel.

Speaking at the dedication, which was attended by members of his family along with IDF soldiers, Brickman recalled his wife’s dedication to the Jewish state.

“I see Lenora’s light with us today as it shines on the men and women of the IDF. Today, I feel her presence, and see her beautiful face, and hear her reminding me how Israel and the men and women of the IDF have been our shield and sword, our protectors and our inspirations. And she is reminding me how much Israel and the IDF have immeasurably blessed us in our lives,” he said.

Turning to the soldiers, he added, “My family hopes and prays that this gift serves as a blessing to each of you and that you also see her light and feel the presence of a beautiful Proverbs 31 woman (“A Woman of Valor”) each time you enter the facility and in all that you do each day as you selflessly and bravely serve the people of Israel and all lovers of Zion, including my family.”