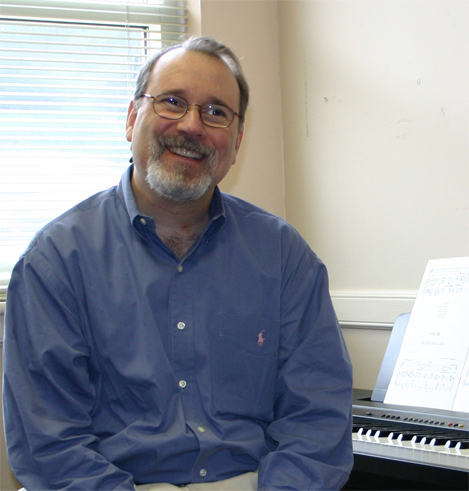 Some cantors come from a long line of cantors and rabbis, and know early on that they want to pursue the family tradition. Cantor Daniel Gale, who began at Birmingham’s Temple Beth-El on July 1, took a somewhat different route.

Gale grew into the position of cantor in his hometown congregation, Temple Israel in Bay City, Mich. The small congregation never had a full-time cantor when he was growing up, Gale said. “When I was very young, there was a part-time cantor, a lawyer in the community.”

A formative experience was attending Camp Ramah in Canada, which is where he would meet his future wife, Erica. Ramah was “an incredible experience for a kid growing up in a small community where there were maybe five Jewish kids.” Walking into the dining hall and seeing 500 campers was “more Jewish kids than I’d seen in my entire life.”

He honed his skills at Ramah, and at the age of 14 led the Rosh Hashanah afternoon service in Bay City. He studied with the congregation’s rabbi Jossef Kratzenstein, who had been invested as a cantor before becoming a rabbi. “He really knew his stuff,” Gale commented.

Gale continued to lead services, singing for the High Holy Days during his college years. He studied voice and opera at the Oberlin Conservatory of Music, and then started at the Jewish Theological Seminary’s cantorial program.

“It just wasn’t for me at the time,” Gale explained, saying that so many of his classmates were so serious and committed, and “I didn’t feel like I was there for the right reasons.”

He returned to Michigan and performed in secular venues. “It wasn’t enough to put food on the table, but I liked to consider myself a professional musician.”

Still, he needed to pay the bills, so he joined his father’s printing business and “gave up singing for a while.”

He is grateful for the time he was able to spend running the business with his father, who died in 1991. He continued to study and become more active with Temple Israel. “My life’s passion has always been Judaism and music.”

There are two ways to become a cantor in the Conservative movement, he said.

One is to graduate from JTS, the second is to study with a cantor and pass a Cantorial Boards exam. He pursued the latter, and became a member of the Cantor’s Assembly, the Conservative movement’s cantorial group. He is also a board member of the Jewish Ministers Cantors Association, an older, non-denominational group.

With the arrival of their son, Noah, the Gales began to think about the future, and raising a child Jewishly in a small community like Bay City.

“You’re in a small town for parnassah, for family,” Gale said. Most Jewish education “happens at home, and we’ve been sending Noah to Ramah, but we were thinking at some point we’d want to leave Bay City.”

About 10 years ago, Gale decided he wanted to dedicate himself to the cantorate. He was in the process of closing the printing business and started looking around the country for a position.

He said he was literally on the steps of the post office, about to send information to several congregations, when he was approached by a fellow Temple Israel member. The congregation’s rabbi was leaving, would he consider stepping in? “That’s how I fell into the position at Temple Israel, where I grew up.”

Leading your childhood congregation brings different experiences. “It’s a sweet thing to officiate at a Bar or Bat Mitzvah for someone I grew up with,” he said. He was also able to participate in the community in a broader way than in congregations where the roles of rabbi and cantor are
more strictly delineated, he said.

But Bay City is struggling to maintain its community. Gale said a century ago, it was the second-largest Jewish community in Michigan, with 900 families. After the lumber industry in the area declined, so did the Jewish community.

Now, there are three small communities – Bay City, Saginaw and Midland – a short distance from each other. About 20 years ago, there was an attempt to merge the communities, but Gale said nobody was comfortable using that term.

Gradually, the three communities have gone their separate ways again. Bay City is the largest of the three, but Gale said he realized “when the last leg of the merger fell away, at some point Bay City would not have the financial wherewithal or critical mass for full-time clergy.”

He decided “it was a sooner rather than later issue.” He worked through the Cantor’s Assembly placement committee, and while he was looking at several communities, he was advised to wait and visit Birmingham.

Gale said he looked at how active and involved the community is Jewishly, and was amazed at what he saw in Birmingham. He also noted the “wonderful facilities” of the Levite Jewish Community Center and N.E. Miles Jewish Day School, and the very high synagogue affiliation rate.

Gale plans to participate in adult education where needed, to “find my place in the educational structure of the community,” and to contribute “to the musical life of the congregation, not only in services.” He will maintain the current choral presence, saying “there seems to be an appetite for that.”

He also hopes to be involved in interfaith work, which was a strong component for him in Michigan. He served on the Board of Directors for the Saginaw Bay Symphony Orchestra and was a member of the Interfaith Clergy Council of the Bridge Center for Racial Harmony. For his interfaith work in the community, Gale was honored with the Bridge Center’s “Spirit of the
River Award for Religious Leadership,” and the City of Bay City’s Dr. Martin Luther King, Jr. “Keep the Dream Alive Award.”

He has also appeared in recital and concert nationally, and has been heard as soloist in numerous broadcasts over National Public Radio. He performed the world-premier of Laurence Sherr’s “Fugitive Footsteps” at a Kristallnacht Memorial Concert in Atlanta.

Last year he performed with Oral Moses, professor of voice and music literature at Kennesaw State College in Georgia. They met at the University of Michigan, and were both opera enthusiasts.

They did a program entitled “Songs of Struggle, Songs of Faith: Celebrating the African-American and Jewish Musical Traditions” at Saginaw Valley State University, and have been asked to reprise the performance next year as part of the Martin Luther King Jr. holiday observances there.

Gale’s wife and son will be in Michigan this year, so she can finish with her tutoring business and Noah can conclude the ninth grade and enter a new school at the time that students in this area transition from junior high to high school.

Gale succeeds Hazzan Errol Helfman, who moved to Richmond, Va. this summer after 12 years at Beth-El.