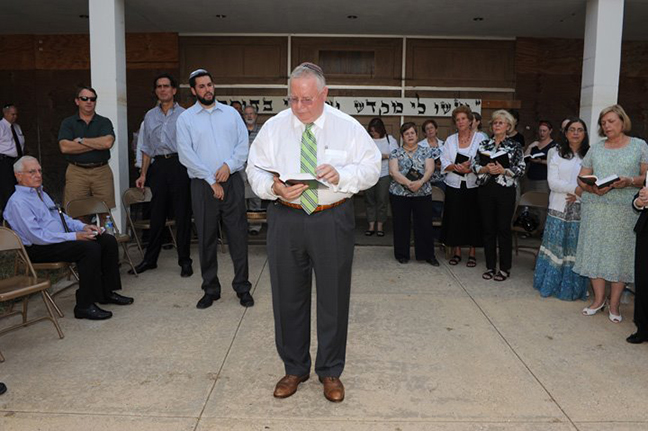 For the New Orleans Jewish community, this weekend was supposed to be much different.

Today, Beth Israel Congregation was to unveil a headstone where they buried the congregation’s seven Torahs that were destroyed in Hurricane Katrina three years ago. Photos of the scrolls’ evacuation through waist-deep water in the congregation’s sanctuary were published worldwide after Katrina.

The ceremony was to cap a weekend that was to mark the progress New Orleans has made in the three years since being devastated after the levees failed during what is known locally simply as “the storm.”

In addition to reopening all of the city’s Jewish institutions despite a drop in Jewish residents from 9,500 pre-Katrina to about 7,000 afterward, incentive programs that are part of “reinventing” the community have attracted about 600 Jewish newcomers.

Instead of marking such progress, the Jewish community joined the rest of the city in leaving town in advance of Hurricane Gustav, which as of now is a Category 3 storm — the same strength as Katrina was when it made landfall.

“These are difficult and strange times for us all,” said Michael Weil, executive director of the Jewish Federation of Greater New Orleans, in an email to community members today. Weil, who was hired as executive director two years ago to guide the community’s recovery, is riding out the storm in Memphis.

The Union of Reform Judaism’s Henry S. Jacobs Camp in Utica, Miss., is reliving its Katrina role as a haven for displaced New Orleanians.

Other community members have fanned out across the region, staying with friends or relatives in places like Birmingham, Atlanta and throughout Texas.

In advance of the storm, the city’s two Jewish Community Centers closed on Friday and announced plans to reopen on Wednesday.

The Federation’s emergency plan is in place, with regular updates at its website, www.jewishnola.com, and through a phone message at (800) 510-8133.

Community members can relate their whereabouts to the Federation by emailing emergency (at) jewishnola.com, or jfgno1 (at) gmail.com.

“This is the time to gather strength, reflect, say a few words of prayer and hope for the best,” Weil said.

On Thursday, Levees.org held a premiere of “The Katrina Myth: The Truth about a Thoroughly Unnatural Disaster” at Touro Synagogue. The film warns that what happened to the levees around New Orleans can also happen in many other parts of the country where there are projects also done by the Army Corps of Engineers.

Levees.org was founded after Hurricane Katrina at a kitchen table by Sandy Rosenthal, 51 and her son Stanford, then 15, while living in Lafayette, Louisiana after evacuating from New Orleans. The group now has chapters in Florida and California and numbers nearly 21,000 members.

On Friday, the anniversary of Katrina, Temple Sinai held an interfaith commemoration with representatives from the Christian and Muslim communities.

Also on Friday, Beth Israel began its commemoration weekend with Friday mincha outside its flooded-out building in the Lakeview district.

Since the storm, the Orthodox Beth Israel has met at Gates of Prayer, a Reform congregation in Metairie.