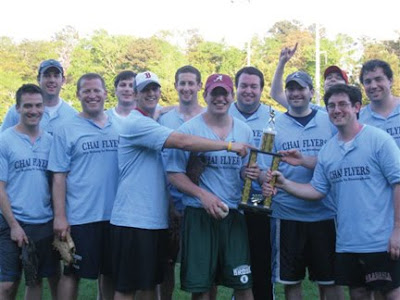 With two new teams added to this year’s Bill Peetluk Memorial Lag B’Omer Softball Invitational, the drama increased exponentially as one of the new teams, “You Belong in Birmingham,” defeated the combined Knesseth Israel/Chabad squad 18-16 in the championship game on April 18.

The winning blast came in the sixth inning as Warren Beth launched a three-run homer onto Montclair Road in front of the Levite Jewish Community Center’s field.

During the tournament’s first seven years, the men’s clubs or Brotherhoods from the three local congregations competed with Mesch AZA for the title. In addition to YBIB, a team from Zeta Beta Tau at the University of Alabama was added this year.

In the early games, YBIB dispatched defending champion Temple Beth-El, 12-10, after an early 8-1 deficit. Eric Goldis drove in four runs for Beth-El, including a home run, but YBIB took the lead in the top of the 6th inning when Nate Lawson stroked a two-run triple. Beth-El’s Matt Levey put his congregation back in front in the bottom of the sixth with an RBI hit. YBIB then scored three in the top of the last inning, which included David Lorberbaum’s and Matthew Ladden’s third hits of the game.

Temple Emanu-El, also a perennial favorite, was eliminated in dramatic fashion by the KI/Chabad team, which was down by three with two outs in the final inning when Rabbi Laibel Berkowitz strode to the plate. He nailed a grand-slam to end the game, 13-12 (see sidebar).

KI/Chabad then defeated ZBT, which was competing less than 12 hours after the fraternity’s “South of the Border” late-night recruitment event.

Mesch AZA took a 3-1 lead against YBIB, but then surrendered 19 consecutive runs. Mesch was led by Jesse Gettinger and his three base hits who along with Yitzi Peetluk were a combined 5 for 5.