Visit Israel without leaving the South

Not able to visit Israel this summer? Three venues across the Deep South offer a taste of the holy land, if not entirely from a Jewish perspective. Links to their websites can be found at sjlmag.com. 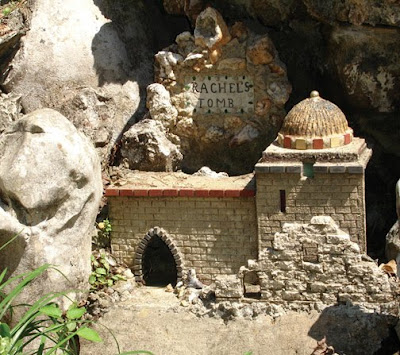 In Jerusalem, there is a famous miniature representation of how Jerusalem looked 2000 years ago. In Cullman, Ala., the Ave Maria Grotto has been attracting visitors for decades, showing Jerusalem and other sites in miniature, but with very different building materials.

Located at St. Bernard Abbey, the four-acre park contains about 125 reproductions of historic buildings and shrines from around the world, with an emphasis on Israel.

Brother Joseph Zoettl, a Benedictine monk, started the park as a hobby. Born in Bavaria in 1878, he was brought to the United States in 1892 and wound up at the Abbey. Working 17-hour days for 30 years in the power house, he began constructing small models of buildings from cement. Over the years, the Abbey sold 5000 of his small grottoes, then in 1932 he embarked on a huge grotto, which became Ave Maria Grotto.

In 1933, a train derailed nearby, ruining a shipment of marble, which he used to fashion the grotto. The grotto was dedicated in 1934, and he kept adding to the park, finishing his last work, a model of the Basilica in Lourdes, in 1958.

People from all over the world sent him materials to construct the buildings — including ash trays, toilet floats, bathroom tiles, costume jewelry, marbles and glass. In LaGrange, Ga., the Explorations in Antiquity Center was founded “to help people experience the ancient Biblical world, its history and culture.”

The center was founded by James Fleming, who has worked and lived in Israel since 1973. He worked 18 archaeological sites and in 1975 established Biblical Resources to educational materials and aids for teaching the historical, geographical, and archaeological background of the Bible. He is also on the advisory board of Biblical Archaeology Review magazine.

He founded the Biblical Gardens at Tantur in Israel, which moved to Ein Karem after losing its lease. The tourism decline in 2000 during the second Intifada led to a decision to move the project to Georgia. The Ein Karem facility was later re-opened by Hannah Trasher, a native of Louisiana.

At Explorations in Antiquities, there are life-size replicas of Jerusalem sites from 2000 years ago, including a four-room Israelite house, water wheel, olive and grape presses, a watch tower, tombs and tents. A recent addition was a Bedouin tent. A separate area provides spaces for children to go on archaeological digs.

The center also offers “Biblical meals” in rooms designed to represent Roman-era dining areas. The four-course meals are done for groups of 10; smaller groups can be added to already-reserved groups.

Future plans for The Explorations in Antiquity Center call for constructing a relief map of Israel large enough to walk on, a football-field-sized Sea of Galilee-shaped pond, a parables of Jesus walk area, and a Roman village.

The center also offers a range of lectures and presentations, and in April held a Holocaust memorial service. The gift shop offers a wide range of Jewish and Christian artifacts.

The center is located at 130 Gordon Commercial Drive in LaGrange. Admission is $10 for adults, or $30 including the Biblical meal. 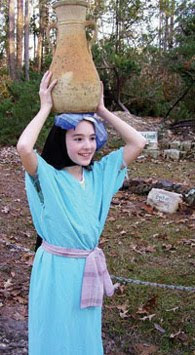 Palestine Gardens was opened in 1960 to show visitors a model of where Jesus walked. Rev. Walter Jackson bought the 40-acre site in southern Mississippi as he neared retirement, after 16 years of looking for a place with the right topography for “the land of the Bible.”

He built a dam to make a Dead Sea, then built replicas of Jerusalem, Bethlehem and Jericho.
With the help of son-in-law Jim Kirkpatrick, the Mediterranean Sea and Sea of Galilee were added, along with many other towns. The site has a scale of one yard to a mile.

In 1994, Don Bradley, who first visited the gardens in 1991, took over the park. He changed the name from “Palestinian Gardens” so no one would confuse it for an Islamic project.

The park’s walking tour is roughly a quarter-mile. Regardless of group size, they try to give guided tours to all visitors. Of note: One should not be surprised if the guide asks about ending the tour with a prayer, as the owners consider the park as a “ministry.”

The park is open Tuesday through Friday during the summer, and weekends year-round. There is no admission charge. The garden is located 10 miles north of Lucedale, Miss., north of U.S. 98.