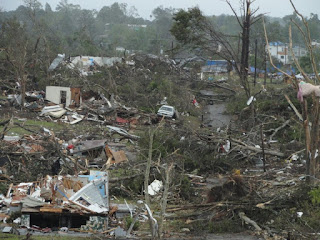 Tonight, Rabbi Avi Weiss of the Hebrew Institute of Riverdale arrived in Birmingham for a program at Knesseth Israel. Rabbi Eytan Yammer has been visiting the residents in Pleasant Grove and plans to take small groups with him several times a week. Tomorrow, he and Weiss will tour the area.

Yammer said he became friends with a police officer and a pastor in the area, and will continue to come and “schlep a little, sift through rubble, but mostly to be there for people and talk to them.” He called it “a privilege and holy work” to be there with the victims.

Pleasant Grove is an area where you can find “10 square blocks where there’s nothing,” he said. Comparisons to a bomb going off are inaccurate, he said, because bomb blasts often leave walls, while the tornado left nothing.

A delegation from Birmingham’s Temple Emanu-El brought goods to Tuscaloosa and Pratt City this morning. The congregation raised $3,000 for tornado relief with its garage sale this past weekend. Many congregants bought items that were then donated to the relief effort.

Plans are in the very early stages to coordinate Jewish groups from across the country that want to come to Alabama to help rebuild, much as groups have been visiting Louisiana ever since Hurricane Katrina.

The Birmingham Jewish Federation and Collat Jewish Family Services have been coordinating with other Birmingham agencies to respond to needs across the state. With needs so widespread, “the most important thing is to work in coordination and not duplicate services,” said Joyce Spielberger, director of community relations for the Federation.

The Federation continues to raise funds from across the country, with the national Federation system directing donors to the Birmingham Federation’s website. Funds will be distributed directly to victims through the Unmet Needs Committee, a coalition of local agencies. Lauren Perlman, CJFS executive director, said that process would likely not start for several weeks, because with the massive scope of the disaster, it will take Red Cross and FEMA several weeks to process people for assistance. After individuals receive their Federal assistance, they are eligible to go before the Unmet Needs committee for help in filling in the gaps left from their other assistance.

She noted that the agency is looking for a donor or a grant to provide case management services. After a 1998 tornado outbreak, CJFS received a grant and worked case management for two years.

On Wednesday at 7:15 p.m., the Southside faith communities will gather at Southside Baptist Church for an evening of “remembrance, thanksgiving and hope” marking one week since the tornadoes. Temple Emanu-El and Temple Beth-El are part of the Southside coalition.