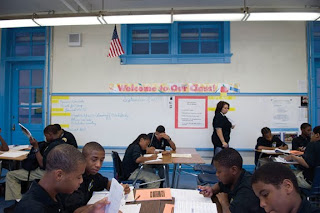 Located just one block from each other, Touro Synagogue in New Orleans and the Sophie B. Wright Charter School make natural partners. Their partnership has now been recognized on a national level, with the presentation of a national Fain Award from the Commission on Social Action of Reform Judaism in May.

The Fain Awards were established in 1983 to honor those congregations and URJ camps whose work in the area of social justice proves exemplary. “The winners of the Irving J. Fain Award for Outstanding Synagogue Social Action Programing justly embody what it means to profoundly pursue tikkun olam – repairing the world,” said Dr. Cheryl Gutmann, Chair of the Commission on Social Action of Reform Judaism. “Their innovation in the pursuit of justice is truly inspiring.”

Touro joined with the Sophie B. Wright school to help make it one in which education thrives, teachers initiate and innovate, and students get the maximum out of their learning experience.

In her High Holy Day sermon last year, Rabbi Alexis Berk stressed that Touro did not “adopt” Wright, but “we are in partnership with them.”

Rabbi Berk calls Sophie Wright “our neighbor. The thing is, in New Orleans, neighbors know each other, care about each other, reciprocally relate with one another, and have one another’s backs. And, if we can do that in our residential neighborhoods, imagine the connected power on a communal level.”

“Adopting a school… that’s almost demeaning,” Hunter said. “We partner with Wright, which shares this corner of the world with us. By partnering, our Touro members who want to help are offered opportunities to work with the students in so many different areas.”

This past year, Wright added two grades, making it a sixth to 12th grade school.
Principal Sharon Clark said “Now we have people rooting for our kids to be successful. The volunteers from Touro have helped us become a better school, academically and socially.”

Clark has been principal there since 2001, and has seen the school system falter for years, suffer through Hurricane Katrina and then become part of the revised and highly praised charter system that is operated through a state agency.

Touro has a long history of social action efforts, such as the annual Mitzvah Day, with initiatives across the city. There’s also the Desmond Project, which involves cooking meals for the homeless each Saturday.

But the Social Action Initiative, chaired by Scott Silbert, knew there was more to do. As Rabbi Berk phrased it, Mitzvah Day is good, but it really should be Mitzvah Life. “Our collective stamina is far greater than we currently realize,” Rabbi Berk stressed. “We needn’t sell ourselves short. There are infinite entry points for engagement in the community.”

Leslie Jacobs, a New Orleanian who is a leader in statewide education reforms, promoted helping in the area of education. She recommended Wright, and the association between Touro and Wright started in May 2009 with a wide range of initiatives.

“We have Teacher Appreciation Days once a month,” Hunter said. “This has been huge. These teachers work tirelessly and it’s time they be recognized. Students can order books through our Sisterhood and thus get discounts. We have collected winter coats, library books, tennis rackets, and prom dresses for distribution to students at Sophie B. Wright. One member of our congregation even contributed 68 new prom dresses to that collection.

“Fourteen Touro members tutor and read with the students weekly. Three motivational and informational speakers were engaged in this past school year. We had meetings with Superintendent Paul Villas to get more dollars for major building work,” Hunter added.
Tzedakah from one Touro family was used toward the purchase of a new flagpole. Another member, who received a U.S. flag in Washington, donated the flag to stand atop the flag pole.

A congregation member treated termite-infested trees at no cost to the school.
Hunter, who headed Touro’s social action efforts in the 1990s, credits Rabbi Berk with inspiring more social action. “She was the fire behind this whole thing. To her, Judaism is more than religion; it’s helping other people in the community. Social action had been under the surface at Touro. Rabbi Berk made it volcanic.”

When the congregation decided to pursue the partnership, Hunter met with Clark. “I had to prove myself and Touro. I asked her what she needed, maintenance, tutoring, painting? And I continue to go there at least once a week. And just to show our overall commitment, the rabbi participates in many of the things we do and she also addresses the entire student body from time to time.”

Clark also sees other benefits. “Our students and teachers are learning about different cultures. The volunteers are not working in isolation around the school. To have this kind of support is very uplifting. It just creates a good feeling throughout the school.

“And I want to stress this is a give-and-take. Our band participated in Touro’s Jazz Fest Shabbat service and we cooked for some of their special after-service meals. It’s all just great.”

Hunter said it’s important that Wright, its staff and students, view Touro has a supportive partner and that a level of trust must exist. “A true relationship has begun and it will continue to grow,” she said.

School partners in the region

In 2007, Mobile’s Ahavas Chesed became a Partner in Education, working with Woodcock Elementary School. Volunteers from the congregation visited on a regular basis, reading to classes or doing one-on-one mentoring and tutoring, assisting with administrative activities, or monitoring lunch to give teachers a break.

Many students and teachers also attended the Ahavas Chesed Men’s Club Chanukah parties.
The Partners in Education program in Mobile county linked 1100 businesses, organizations and religious institutions with area schools, in an effort to improve education in the county.

On Oct. 30, 2008, Ahavas Chesed was one of 13 recipients of the Outstanding Partner in Education award.

Ahavas Chesed Rabbi Steve Silberman said the award showed the type of difference the 130-family congregation could make in the community, and praised the level of participation in the effort.

The Mobile County School Board closed the school in May 2009 because of declining enrollment, and the city last year approved a lease of the building to use as a community center. Ahavas Chesed then started working with Leinkauf Elementary.

In Jackson, Beth Israel teamed with two nearby churches to adopt McLeod Elementary, the neighborhood public school, in 2008, through Partners in Education.
Recently, the school went from “Academic Watch” to “High Performing.”

Among the activities is a semi-annual Literacy Day, where congregants go to the school and are split up among classes to do group reading, and encourage independent reading, especially over the summer.

Two years ago, the Birmingham Jewish Federation’s Community Relations Committee took part in a national initiative to highlight issues of poverty, doing programs on the theme of “FED UP With Hunger.”

This year, volunteers Hilary and Scott Gewant have spearheaded “FED UP With Illiteracy,” a hands-on effort to partner with area schools to promote reading proficiency.

A team of almost 30 volunteers is working with students at Glen Iris Elementary and Grantswood Community School each week.

One regular volunteer is a Glen Iris alumna, Anne Cohn, 91, who works with the first grade and was recently featured on Fox 6 News’ “What’s Right With Our Schools.” She also recruited her daughter-in-law, fellow Glen Iris alumna Eileen Cohn, and several other volunteers from her New Horizons group at the University of Alabama at Birmingham.

Glen Iris Principal Michael Wilson told the Federation, “Some individual attention and interest is often what makes a difference. Thanks to you all for what you are doing for my children.”