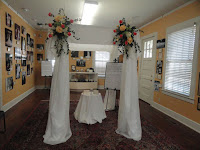 Jasper’s Temple Emanu-El may have closed in 2005, but the Jewish community’s mark on the Alabama town is far from forgotten.

Last month, “The Jewish Families of Walker County” opened at the Bankhead House and Heritage Center, featuring memorabilia, Judaica and photographs from the area’s Jewish community.

The exhibit, which opened in early November, will be on display through Dec. 24.
Paul Kennedy, president of the Walker Area Community Foundation, said the exhibit first came to mind in 2007 when he went into the Emanu-El building. When the foundation opened its permanent home in the historic Bankhead residence, this was one of the first exhibits they wanted to do there.

There was another tie between Sen. William Bankhead and the area’s Jewish history. When Emanu-El had its cornerstone laying in 1922, Bankhead gave an address.
The exhibit, coordinated by Brenda Beard as a “labor of love” because she was “adopted” by the May family.

The exhibit includes replicas of many newspaper advertisements for Jewish-owned stores in Jasper and in coal country, in mining towns like Parrish, Sipsey and Cordova. Life cycle photos span the decades and generations.

Cash registers, medical equipment and other items recall the community’s businesses.
There is a ketubah from 1906 for Gerson and Fannie May, signed by Rev. A Rappaport of Birmingham, with the ceremony taking place in Democrat, Ala.

Photos depict a 1943 wedding of Jerome Newmark and Dolly Frankel at the Greenville Hotel in Greenville, Miss.

The Jasper community has been known for one of the highest per-capita United Jewish Appeal campaigns. Another item of note was when student rabbi Hugo Gryn came for the High Holy Days and dined with the Mitnicks. As it turned out, Gryn was a Holocaust survivor, and George Mitnick had not only liberated the camp he was in, he had signed his liberation certificate. Gryn later became the executive director of the World Union for Progressive Judaism.

Kennedy said a fun part of the exhibit has been “the gentiles who come in and remember these families and what they did for them, ‘when times were bad they were here for us’,” they would say.

The Bankhead House is at 800 West 7th Street in Jasper.