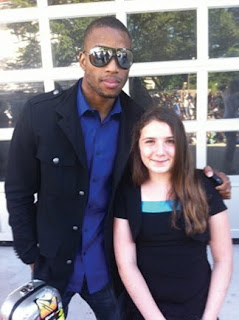 Hannah Weiss has always been into music, so it isn’t a surprise that her Bat Mitzvah project has to do with sharing music. After all, her cantor at Touro Synagogue in New Orleans told her that when she decided on a mitzvah project, it should be something that has meaning to her.

The surprise is how large the effort is becoming. Through an online and live auction and a concert, she is hoping to raise $50,000 in a Music For Kids endeavor to buy musical instruments for students in New Orleans through the Tipitina’s Foundation and Horns for Kids.

She has partnered with Troy “Trombone Shorty” Andrews for a May 12 benefit concert at Tipitina’s in the French Quarter. Judaic artist Stacy Beyer will also perform.

Hannah’s mother, Brooke, said Hannah “started singing before she started talking.” She plays guitar and violin, and is in Lusher Charter School’s Talented at Music program and a member of the orchestra.

When it came time to pick a Bat Mitzvah date at Touro, they started discussing what project to do. The family is long-time friends with Andrews, who was a bandleader at age 6. At age 4, he performed at the New Orleans Jazz and Heritage Festival, amazing Bo Diddley.

Andrews released his first CD at age 16, then toured the world in 2005 as a member of Lenny Kravitz’s band.

In 2006, he joined U2 and Green Day in the pre-game concert celebrating the first post-Katrina New Orleans Saints game in the repaired Superdome, and in 2009 became the youngest artist portrayed on the annual JazzFest poster — by 17 years.

In 2010 he had his first national release, “Backatown.” He is on the road a lot, but when he was in New Orleans chatting with the Weisses, Brooke said they “casually mentioned ‘maybe you could do a concert,’ and right away agreed he would.”

“I didn’t really expect him to do something that big right off the bat,” Hannah said.
The May 12 event kicks off with a catered patron’s party at 6:30 p.m. Beyer will perform at 8 p.m., followed by Trombone Shorty and Orleans Avenue at 9 p.m.

Sponsorships for the evening are also available. Tickets are $50, patron’s tickets are $150 each or two for $250.

Hannah has been going around town collecting donations for the auction, which is currently online. There are already 70 items listed with more to come. Bids will be taken through May 10, after which the highest bids will be the starting bids for the live auction.

Touro Synagogue has a partnership with the Sophie B. Wright School. While it has a brass program, it doesn’t have a string music program, and there has been some desire for one. Hannah said she hopes to buy instruments for Sophie B. Wright, helping start a string and orchestra program, and look at other schools as well.

While raising $50,000 may seem like a daunting task, Hannah said studying for her Oct. 6 Bat Mitzvah is the bigger challenge.

One participant in the May concert is making a return trip to New Orleans. Beyer, who has three Judaic CDs out, is a New York native who moved to Nashville to write country music. One of her pieces, “Dancin’ with Elvis,” hit No. 1 on the Australian charts for 16 weeks.

While in Nashville, she started writing Jewish music, and by 1006 was the first vocal music artist-in-residence for the Jewish Community Center Association’s Maccabi ArtsFest.

She also was part of a Moment magazine Jewish music sampler disc, and in 2006 all 19 of those artists were invited to take part in the New Orleans Jewish Music Festival, designed to help the city during the initial post-Katrina recovery.

As part of the festival, the musicians gave out CDs to the community. Hannah got one of Beyer’s CDs, quickly memorized the songs and “ever since that day has been a huge fan of hers.” Every year at the Henry S. Jacobs Camp, she performs one of Beyer’s songs at the talent show.

Katrina hit the Weiss family hard. Brian, a member of the New Orleans Police Department, stayed behind in the chaos as the rest of the family went to stay with Brooke’s sister, Tammy Rubinsky, in Jackson.

During the evacuation, Brian’s grandmother, 95-year-old Lena Feingold, died in Lafayette en route to Houston. Because of his duties, he missed her funeral.

They had six feet of water in their home, losing all their possessions. Upon returning to New Orleans, Brooke coordinated with groups from across the country that went to New Orleans to pitch in with the recovery.

One group included videographer Jeff Brody, who did a “Then & Now” video about the community’s Katrina experiences. He interviewed Hannah in the shell of what had been her bedroom. They got to talking about music and she mentioned Beyer’s “Climbing Up the Tree of Life,” and because he knew Beyer, he called her right then and Hannah sang the song to her.

When plans started coming together for Music 4 Kids, Brooke decided on a whim to email Beyer and “didn’t expect to hear back.” Within five minutes, Beyer called and “was in tears,” saying she remembered Hannah’s call from several years earlier.

Beyer said she had just suffered a “great loss in my family,” but “hearing Hannah singing my own words of strength to me — when she herself was living through a tremendously challenging time — was something I will never forget.”

Beyer added, “To now be a part of her mitzvah project after all these years — since that day — means so much to me. I am looking forward to finally meeting in person this amazing, wonderful young lady.”