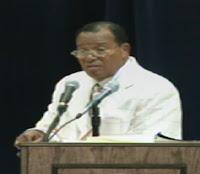 Nation of Islam leader Minister Louis Farrakhan addressed a packed house at the Elmore Gym at Alabama A&M University tonight, concentrating on the topic “The True Meaning of Education,” but also acknowledging the controversy over his appearance and sprinkling in numerous comments and references to the Jewish community.

Farrakhan was invited by the Alabama A&M Poetry Club and Alabama A&M Democrats. The university, as well as the state and local Democratic parties, distanced themselves from the visit. Many religious leaders in Huntsville decried the visit by the “divisive” leader, and a Facebook page opposing the visit was established yesterday, though there were only 18 “likes” as of tonight.

Those who were critical of the visit acknowledged Farrakhan’s right to free speech, their concern was over giving Farrakhan a forum for his views.

Early in the talk, Farrakhan thanked the university for “not giving in.”

He stated that blacks “get frightened when Jewish people” are critical of a black man.

Jews “are the controller of the ceiling and you only go as far as they permit,” he said. “Sometimes in order to crack that ceiling you have to genuflect.”

He then went into the current controversy over Florida Marlins coach Ozzie Guillen’s pro-Castro remarks, ascribing Jewish ties to it. The roots of the alleged Jewish hatred of Castro, he said, comes from the Talmud, which he said states that a Jew is not a real man until he owns property. “Don’t fault them, that is what they are taught,” Farrakhan said.

After the expulsion of Jews from Spain, many Jews wound up in Cuba and amassed large tracts of land, Farrakhan stated. That land was taken by Castro, and the Jews fled to Miami and other places, where “Cubans, who are Jewish, run it all.”

He added that those Jews “rebuilt” where they went because “no one could take the knowledge they had.”

He spoke of what Jews, Christians and Muslims claim to believe, then said “the hypocrisy in religion must end.” He told the students that if they truly knew Jesus, they would be “trying to get yourself together to meet him” and not succumb to worldly temptations.

Stating the three faiths stem from Abraham but have been in conflict, Farrakhan said that “when Christ comes back he wants to straighten out the family.”

He questioned those who would label him as anti-Semitic. “No Jewish person have I or any with me ever physically stopped, violated. Our Koran teaches us that if we see somebody writing a swastika on a Jewish synagogue we are to stop them. Any house where God’s name is mentioned is a house we should respect.”

He decried the notion of someone coming out of a mosque to attack Jews or anyone else. “Is your hatred that much that you want to go kill people?” One may have hate in one’s heart, Farrakhan said, but “what do you do about it?”

Many of his references to Jews were out of admiration. He noted that Elijah Muhammad had urged his followers to “study the white man, and the most productive of the white man are the Jewish people.”

Farrakhan added, “They own, we rent. They build and we ask for a job.”

In a show of hands, he asked the students to state their majors. When he asked how many engineering students there were, he commented disapprovingly that there were only 15 in a room of 6,000. He questioned the utility of an African-American studies degree. “Jews don’t learn Jewish history in school,” he said. “They learn science and math, they learn to be masters of everything they touch. And they approach everything they touch with the mind of a master.”

In short, he wants to see blacks be a “productive, self-respecting people.”