On Tuesday, Major Gen. (Ret.) Prof. Isaac Ben-Israel, Chairman of the Israeli Space Agency and the National Council for Research and Development, visited with Alabama Governor Robert Bentley as part of a three-state swing through the Southeast.

At the meeting, he discussed Alabama’s ties with Israel and the production of the Iron Dome missile defense system. He also urged the governor to lead a homeland security delegation to Israel for an international conference in Tel Aviv in November, and discussed the growing problem of cyber-terrorism.

Israeli Consul General Opher Aviran was also part of the delegation that met with Bentley. Ben-Israel and Aviran had been in Huntsville earlier that morning meeting with high-tech companies that want to do business with the Israeli military.

Mark Sabel, president of the Jewish Federation of Central Alabama, attended the luncheon as well. He noted that “it is remarkable that the Governor made himself available to meet with the Israeli delegation given that it was the penultimate day of the regular Legislative session, with a number of major issues, including major budgetary issues, still unresolved.” 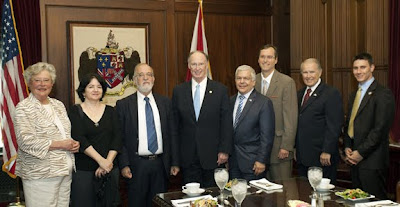