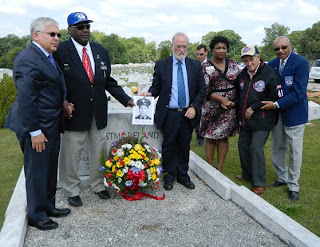 The role that Tuskegee Airmen played in saving Jewish lives in World War II was highlighted in a ceremony involving members of Israel’s military and diplomatic corps.

“The Tuskegee Airmen fought victoriously to defeat the Nazis in World War II and save Jewish lives from the Holocaust. These brave men made the ultimate sacrifice during World War II to ensure good would triumph over evil. The Jewish people will always be grateful to the Tuskegee Airmen,” said Aviran.

The Tuskegee Airmen were so named because all African-American pilots in World War II trained at Tuskegee. In addition to fighting the Axis, they fought the bigotry of Jim Crow on the home front.

Ben-Israel and Consul General Aviran placed a wreath on the tomb of 1st Lt. Walter D. Westmoreland at South View Cemetery in Atlanta. Westmoreland graduated from Tuskegee Army Flying School (Class 43-G) on July 28, 1943. On October 13, 1944, while returning from an escort mission to Blechammer, Germany, the Atlanta native was killed in combat.

Many surviving members of the Tuskegee Airmen, including Mr. Norris Connally, a personal friend of 1st Lt. Westmoreland, were in attendance.

“I’m excited to be here today,” said Ben-Israel. “As a Jew, an Israeli and an Air Force General I am honored by the Tuskegee Airmen.” Ben-Israel was in Atlanta to speak at the Georgia International Law Enforcement Exchange 20th Anniversary Gala as well as brief the heads of Georgia’s law enforcement agencies on security matters. Earlier in the week he was in Huntsville for a seminar to help Alabama companies do business with the Israeli military.

Ben-Israel is the current Chairman of the Israel Space Agency, Israel National Council for R&D and Israel High Committee for Science and Technology. He is also a professor at Tel-Aviv University where he teaches in the Security Studies Program.