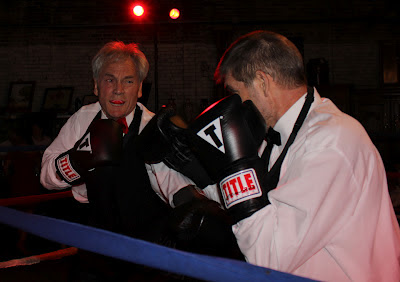 A large emphasis at Birmingham’s Levite Jewish Community Center is physical fitness and overall wellness, so this year’s LJCC fundraising gala had a theme that came from that department.

Students of the LJCC’s Juarez Boxing class took to the ring last night, with the men doing three-round matches, with the women doing sparring exhibitions between fights. The main event, capping the night, was former Alabama Governor Don “Governator” Siegelman taking on Jerry “The Snake” Schnader. Both boxers wore tuxedo shirt tops with their boxing shorts, and both landed numerous hard shots during the bout.

Unlike the first three bouts, a winner was not declared in the finale. Instead, it was emphasized that the real winners were the LJCC, the American Heart Association and American Stroke Association, which also benefited from the evening.

Around 300 crowded into a large antiques store near Pepper Place for the gala. The store was transformed into a boxing venue, with numerous tables for attendees, and a separate room for the silent auction and hors d’oeuvres. When it came time for the main event, the entire roster of fighters came parading through the room.

Caroline “Lights Out” Leak, Lydia “Bad to the Bone” Cheney and Jennifer “Princess of Pain” Chandler did the exhibitions. “Ring Girls” announcing the rounds were women who had been touched by heart disease or stroke, whether themselves or a family member. Among the women was Karen Weinrib, who had a heart transplant in December 1991.