Update (Sept. 10): Here are links to an introductory video about Rock Shabbat and the group’s first Havdalah event, held Sept. 8. 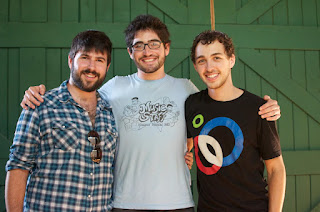 Three friends who spend summers at Camp Ramah Darom are about to embark on a “road trip of American Jewish music.”

Sam Rosenbaum and Sam Rotenberg, who have a band called BeSamim, will be accompanied by Asher Krell of Birmingham on the road trip, which kicked off in Augusta, Ga., on Sept. 3.

The Rock Shabbat tour will take them to 16 cities, where they will meet with Jewish musicians, explore their music, and at the end of the week, hold a community Havdalah, inviting all the local musicians. They plan to have the Havdalah at a neutral site, so all would be comfortable attending.

Each week they will do a webisode featuring their experiences as they explore the “who, what, where, when, why, and how of American Jewish Music.”

Krell said the trip is a “way to open up people’s eyes to the Jewish music that is out there.”

They will first head northeast, then go cross-country through Chicago toward Washington state, down the west coast and back to the Southeast.

They will be in New Orleans the week of Dec. 2, finishing with a community Havdalah on Dec. 8. Rock Shabbat will then drop in on Birmingham on the way to Atlanta, with the tour concluding in Miami on Dec. 22.

That evening, they hope other communities across the country will hold their own Havdalah services.

The two Sams had been working on this project for a year, then received funding for it from an anonymous donor. While at camp this summer, they asked Krell to accompany them.

They sat down and figured out which cities had musicians they knew, and started filling in gaps from there. One stop is Rapid City, S.D. “It will be really interesting to see how they interact, after we’ve been to New York and Chicago,” Krell said.

They want as many people as possible involved, and hope those attending the Havdalahs or viewing them online will look at the events from other communities.

“Hopefully it will create connections between people,” Krell said.

The tour’s name is actually a play on words, Krell noted. Certainly, one aspect is to rock Shabbat, in terms of music. But there is significance in the tour’s end — Dec. 22 is the day that the Mayan calendar supposedly predicts for the end of the world.

They are playing on the Hebrew word “rak,” pronounced the same way, which means “only.” As everyone else is in a frenzy over the end of the world, their message is that Dec. 22 is rak Shabbat — it’s only Shabbat.

Details of the tour and the ongoing webisodes will be available at www.rockshabbat.com.