Allies of Israel rally at U. of New Orleans

Those who support Israel need to be proactive, not reactive, to reach the hearts and minds of future decision makers. That’s the aim of Chloe Valdary, founder of Allies of Israel at the University of New Orleans, which held its first major event on Jan. 28.

While the event drew about 100 UNO and Tulane students and community members, the event also attracted about 20 on the other side of the issue.

Before the event, the Driftwood, student newspaper at UNO, quoted Muslim Student Association member Sarah Abdelaziz as saying Americans should be pro-Israel “maybe if they support violence against innocent civilians.”

The Palestine Solidarity Committee of New Orleans showed up to distribute flyers, including information on Sabra hummus, which is available on campus and is a target of boycotts by anti-Israel groups.

Palestine Solidarity Committee member Olga Rocheeva told FightBack News that “the rally was a mousetrap set up to incite a provocation from us.”

Valdary shrugged off the protestors, saying they “walked in, held up a sign that said, “Don’t forget about the Palestinians” and then walked out.” 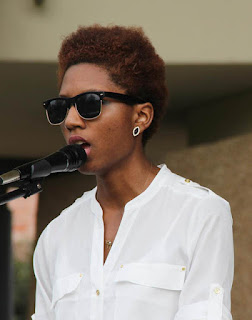 In her opening remarks, Valdary (right) compared the Boycott-Divestment-Sanctions movement to anti-Jewish boycotts from the 1930s. “The end result of this is genocide,” she said.

On July 9, 2005, the BDS movement started, soon followed by “Israel Apartheid Week” demonstrations at campuses around the world. She noted that the common chant at pro-Palestinian rallies is “from the river to the sea, Palestine shall be free,” meaning the conquest of all of Israel, not just the post-1967 territories.

“How far will you let it go?” Valdary asked. She continued by asking what those in attendance would do if a group claimed the “Holocaust never happened, what if they denied to your face that 6 million Jews were killed” and called Hitler one of their heroes. “Don’t think it could happen? It happened right here, at this institution. Last November, on the day called diversity day,” she said.

This day wasn’t just to support Israel, but to stand with the Jewish people. “Anti-Semitism is rising. Jew-hatred is spreading. The thing we said would never happen again is happening,” Valdary said. “Today’s event is our collective affirmation that as Americans and Israelis, as Jews and Gentiles, we will fight and we will stand for liberty.”

Part of the group’s aim is to launch a multimedia campaign, “Once and For All,” raising awareness of anti-Semitism by using popular culture. She is currently trying to raise $10,000 to launch the campaign through “film, music videos, mixed media and other artistic measures” and take it worldwide from New Orleans.

As an example of using new media, a video of her remarks received close to 10,000 views within the first week after the rally.

When Nemes spoke, he had just returned from Israel 10 days earlier. While anti-Israel forces demonize Israeli soldiers, Nemes spoke of his close friendships with many soldiers and what they are really like. “Their goal is peaceful coexistence in their homeland… Their hope is to not to have to harm one Palestinian if they can help it.”

He noted that their military is called the “Israel Defense Force, not some holy brigade trying to meet an imaginary heaven that does not exist… There is no heaven where you go if you go to blow up a child or adult.”