“Far Out” film about Ungerer screened in region 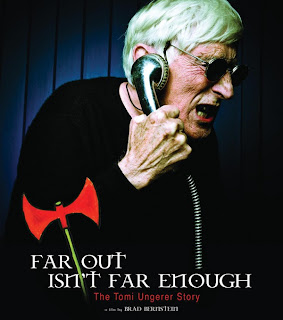 Films about a great illustrator who escaped Nazi-occupied France, a breakdancing Bar Mitzvah boy and five Ukrainian Jewish families who lives in a cave for 511 days to escape World War II are among several of Jewish interest featured in the annual Sidewalk Film Festival, which will be held August 23 to 25 in downtown Birmingham.

“Far Out Isn’t Far Enough,” a feature-length film by Brad Bernstein, centers upon the compelling story of illustrator/artist Tomi Ungerer — considered one of the greatest children’s book authors and illustrators until he went off in a different direction.

The film screens Aug. 2 to 8 at the Zeitgeist Multidisciplinary Art Center in New Orleans before coming to Birmingham for Sidewalk later in the month. It will screen at Sidewalk at the Alabama Theatre on Aug. 25 at 1:30 p.m. The DVD will be out October 22.

Ungerer grew up in Strasburg, France, which was occupied by the Nazis when Ungerer was just a few years old. He is not Jewish, but the Nazis noticed his artistic talent and forced him to draw Nazi propaganda that was horrifying for anyone of any age, let alone a young boy who was friendly with everyone.

He came to the United States in 1956 and became a well-known children’s book author, especially in the 1960s. “He said he felt like he was robbed of his childhood innocence and was forced to do art that was upsetting to him as well as others. So he wanted to draw and write about the good in the world; to make people happy with his creativity,” said Bernstein, who met with Ungerer in his native Strasburg to get more than 40 hours of interviews and footage for the film.

“Tomi loves to talk and he has some compelling stories to tell. And he is the only living French artist with a whole museum dedicated to him, so we were able to obtain for the film and use thousands of his original works, even the ones he did when he was very young,” said Bernstein.

In the early 1960s, Ungerer toured around the segregated South and was compelled to write and draw about the wrongs of the Jim Crow era. “Growing up under forced Nazi rule, I think he had much sympathy for the plight of the Jews as well as for minorities who were not granted equal rights. He really illustrated that in what he drew and what he said,” added Bernstein.

Later in the 1960s, Ungerer’s work became more adult and political with his Vietnam War protests and him even dabbling into erotica. “This was back when you could have separate lifestyles and careers pre-Internet. But he was confronted with this duality in the 1970s and exiled to Canada. His life and career took some different paths,” he said.

Now 82 and living back in Strasburg, Ungerer continues to draw, write and do art. He is also campaigning to keep the Yiddish language alive in Strasburg and surrounding areas.

Bernstein was born in Riverdale and grew up in Scarsdale, N.Y. He said his family is from Poland and the Ukraine. He was Bar Mitzvahed in South Florida, where he now lives and where his grandparents were living at the time.

“As part of my Bar Mitzvah experience, we all went to Israel. It was the first time for all of us and it certainly had a tremendous impact on all of our lives,” he said.

Bernstein majored in journalism with a focus on athletic at the University of Michigan and was the play-by-play broadcaster when the hockey team won the national championship.

A few years after graduation, he was asked by ESPN to coordinate a 10-hour multi-part college football documentary, narrated by Burt Reynolds. That helped to launch his career in big-time documentary production.

These days Bernstein owns his own company, which primarily coordinates music and entertainment-related documentaries such as some of VH1’s “Behind the Music” shows.

He said “Far Out Isn’t Far Enough” is a project he is very passionate about. It has already won awards and been screened at film festivals in places ranging from New York to Haifa, Israel, to Poland and Germany.

“We’ve been very pleased with the response we have gotten so far and we’re happy to be able to share this story,” said Bernstein. “Tomi is quite an individual. He is like an onion with so many layers to peel.”