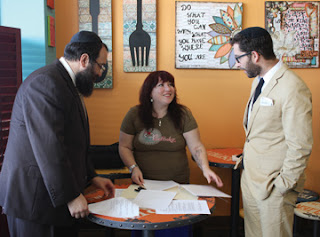 The New Orleans area and beyond has a new kosher option, with the first bakery certified by the Louisiana Kashrut Commission in a decade.

“I’m really excited about this new venture, and to have a new community to share everything with,” Boffone said. She added that the process “wasn’t as scary as I imagined it.”

The bakery, which opened in June 2012 at 6601 Veterans in Metairie, was already vegan and gluten-free, which made the certification process relatively easy. “It was much easier than a non-gluten-free bakery would be,” Nemes said.

Polsky’s wife, Mindy, saw the bakery and approached Boffone with the idea of becoming kosher, something she had not previously considered.

Because the bakery’s ingredients were vegan, there was nothing dairy to be concerned with. Polsky explained that the only difference with kashrut is that to be pareve — neither meat nor dairy — the ingredients could not be manufactured on equipment that also processed dairy ingredients. A handful of substitutions had to be made, and that was most of the process.

In the cases where Boffone had to switch ingredients, Polsky researched options. Boffone noted that she had to change the non-dairy cream cheese she had been using, and it turned out that the kosher one “is better than the one we had before.”

The bakery has a wide range of baked goods, including cupcakes, cookies and brownies. There are vegan cheddar biscuits and mini-doughnuts, and of particular interest is the year-round availability of kosher king cakes.

For those outside the New Orleans area, PeaceBaker ships its goods nationally.

PeaceBaker also has several types of hand pies, but there is one that is not under certification — the spinach mushroom hand pie. Polsky explained that spinach and other leafy vegetables are difficult to certify in general, because of the remote possibility of a non-kosher insect between leaves. The chances of it are very remote and are so small that making the spinach products on the same equipment as the certified items isn’t an issue.

After completing the process but before the ceremony, Boffone and several others went to Casablanca, a local kosher restaurant, to celebrate. There, Boffone gazed upon the Casablanca certification, anticipating having her own shortly.

She said having the pareve certification is an added attraction for those who pay attention to gluten-free and vegan standards, whether or not they are Jewish.

At the end of the ceremony, it was mentioned that the local Muslim community would also need to be notified about the certification, as Islam has a similar dietary system. Boffone noted that her Muslim friends were waiting to hear when the certification became official.

The ceremony ended with several purchases by those in attendance.